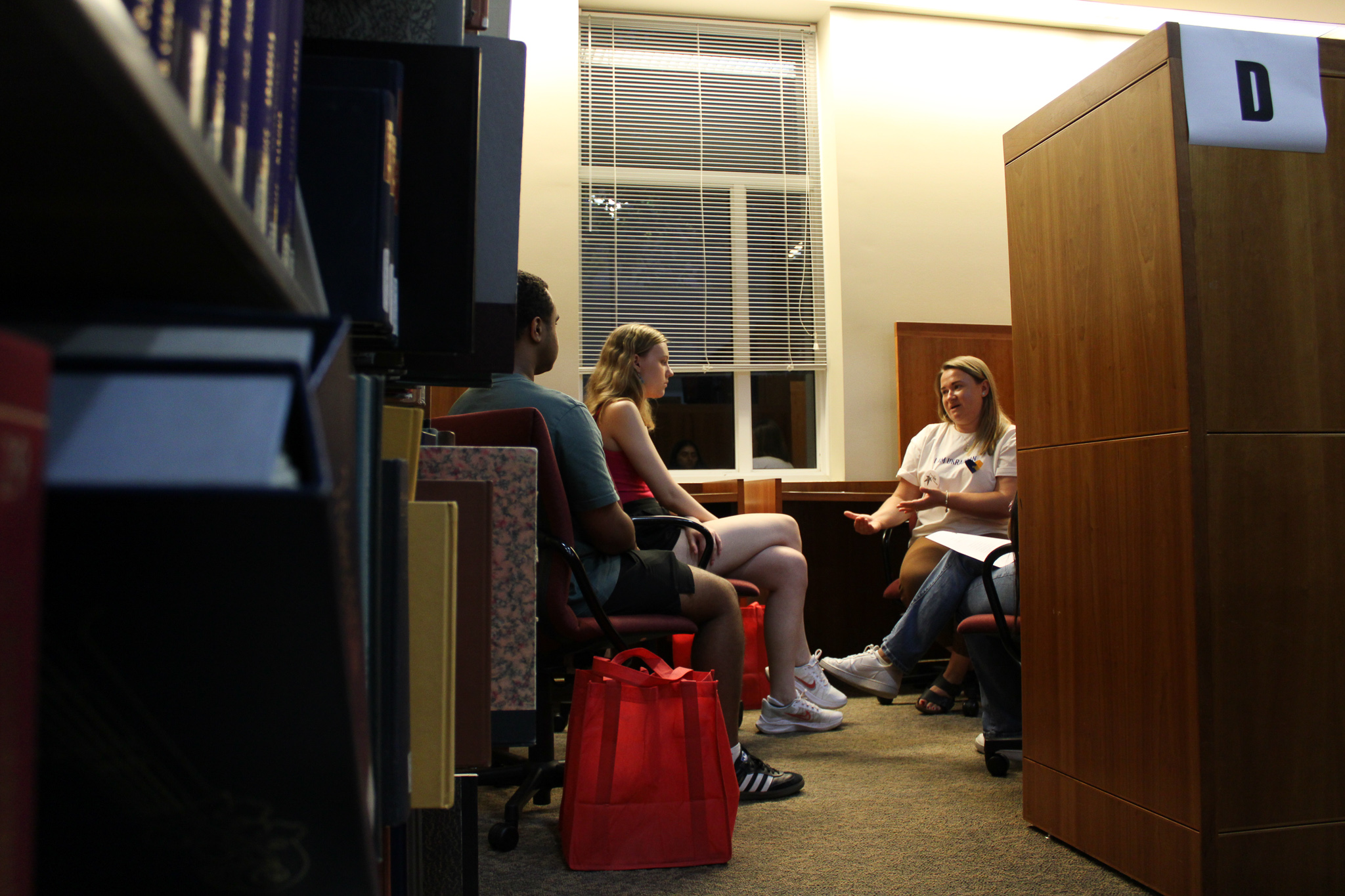 Yana Chapailo, a University of Maryland graduate student studying international education policy, speaks to students during the NextNOW Fest’s “Human Library” on Sept. 9, 2022. The Human Library is a movement for social change that gives those with unique perspectives the opportunity to share experiences with others, acting as “human books.” (Giuseppe LoPiccolo/The Diamondback)

Dilan Gunawardana wandered into NextNOW Fest’s Human Library at the Michelle Smith Performing Arts Library after being intrigued by its name, but he left having negated stereotypes he had previously believed.

The Human Library is a global movement that began in Copenhagen, Denmark, in 2000 as a way to create a safe space for difficult conversations regarding prejudices and misconceptions. People with particular life experiences volunteer to be human “books,” which readers can sign up to “read.” Reading a book involves listening to a story about the volunteer’s life and asking questions about the issues the book represents.

Each of the human books at the event were asked to provide a short and captivating title. Some of the books available to read were “Baltimore Cop,” “Shoes of a Street Fighter” and “Ukrainian.”

Gunawardana, who read “Baltimore Cop,” said he had a “bad taste” about police officers because of what he saw on social media until he had the opportunity to speak with one in person. The experience helped him empathize with officers, he said.

The “Baltimore Cop” was Gregory Eads, a retired police officer who now works as an investigator for the state of Maryland. Eads wanted people to understand him, his career and his perspective without judging or persuading the reader in any way.

“I’d like for you to leave with all of your questions answered, or maybe a different perspective of what you thought the book might be about,” Eads said.

Laura DeMarco, who was a book titled “Autistic,” noted that people need to learn to be comfortable being uncomfortable. She said she had one reader who, as time went on, became more comfortable with asking hard questions about her diagnosis, which she was hoping someone would do because it’s a great talking point regarding this issue.

“It’s not like people are gonna walk away, ‘Wow, all my internal biases are now gone,’” DeMarco, a library and information science graduate student, said. “But maybe, it’ll teach people to at least think more critically about humans in general.”

The Graduate Student Government’s representative Annie Rappeport, who previously volunteered as a human book, made the initial suggestion to feature graduate students when the event was hosted again.

Michael Homme, a library supervisor in the Michelle Smith Performing Arts Library and a reader at this event, said the Human Library gave people a chance to receive honest answers to questions they may have not been able to ask before.

The dean of the arts and humanities college, Stephanie Shonekan, was a book titled “Heart/Art of Darkness,” and she spoke about her daily experience of being dark-skinned and how people react to her because of that. She said her interactions with the readers became an exchange of stories when they themselves were open and shared some of their own personal experiences.

“It made me feel like they saw me. I felt seen. I felt heard,” Shonekan said.

Steven Luckert, or “Holocaust Museum Curator,” added the books and readers can both learn from each other in instances such as this.