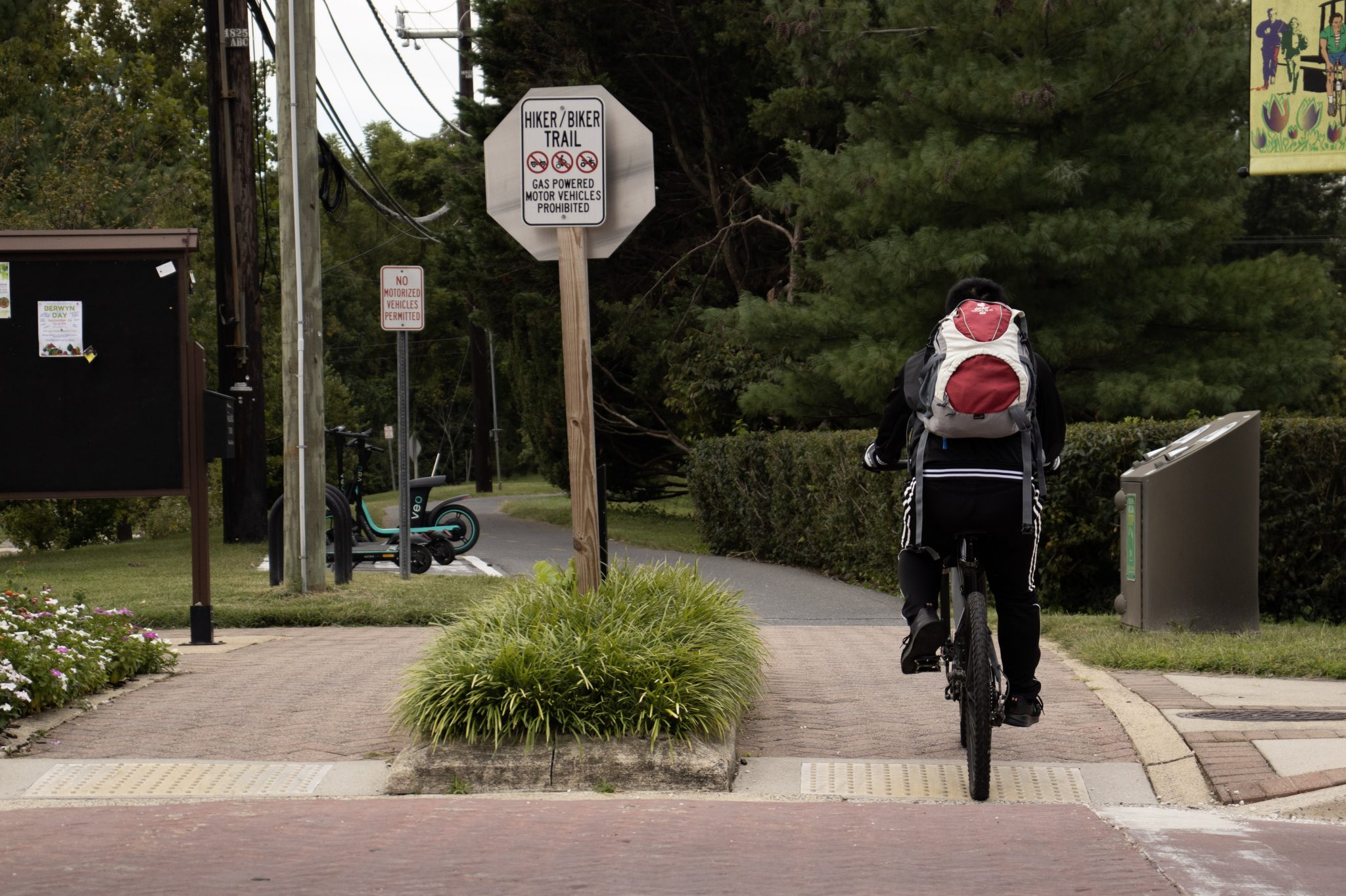 A biker crosses a road that intersects the Trolley Trail in College Park on Sept. 25, 2022. (Neelay Sachdeva/The Diamondback)

Cyclists and pedestrians in College Park will soon be able to travel from the Trolley Trail to the Northwest Branch Trail without having to walk along Route 1.

The city of Hyattsville entered the first phase of construction to extend the Rhode Island Avenue Trolley Trail this summer. The extension, which has been in the works for several years, will fill the 0.54 mile gap between the Trolley Trail and the Northwest Branch Trail along Route 1 between Farragut Street and Charles Armentrout Drive.

The current gap between the two trails forces pedestrians and cyclists to walk along Route 1 to reach the other trail. This is a major concern for cyclists because they must either bike on the crowded sidewalks or on the side of the busy road.

“The Trolley Trail, it’s exclusively for bikers and pedestrians; you don’t have to worry about car traffic,” Hasan said. “And suddenly, you’re thrusted onto the side of Route 1, and it just makes me have to be a lot more cautious and a lot slower.”

[VeoRide has been expanding fleet around College Park with e-bikes]

Hasan said he was once biking along the road when a turning car hit him. Nobody was hurt in the collision, but the incident made Hasan realize the need for biker-friendly infrastructure.

This $6.4 million project is coordinated between the city of Hyattsville, the Maryland State Highway Administration and the Maryland-National Capital Parks and Planning Commission. In addition to the construction of a paved shared-use path for pedestrians and cyclists between the two existing trails, the project also includes enhanced crosswalks and signals.

Sarah Lobsenz uses back roads when she is cycling in between the two trails to avoid the traffic and crowded sidewalks along Route 1.

This trail extension might also give students more options for housing by opening up more of the Hyattsville area at a lower cost than areas closer to the campus, Lobsenz, a fire protection engineering graduate student, said.

The project could also attract newcomers to the university if they are looking for housing near a bike trail that leads to the campus, the Department of Transportation Services said in an email statement.

Although Derek Willis, a journalism lecturer,  doesn’t have to cross Route 1 on his cycling commute, he is forced to cross other large and often traffic-congested roads, such as Adelphi Road and University Boulevard.

“I was kind of surprised that there wasn’t a way to cross those in a way that’s not so car-centric,” Willis said.

Willis added that connecting various trails and paths contributes to rider safety and keeps bikes away from traffic where accidents are more likely to happen.

“The safer we can make it for bike riders, the more they’re going to use it and the better the experience for everybody is going to be,” said Willis.

The extension is projected to be finished by fall 2023.