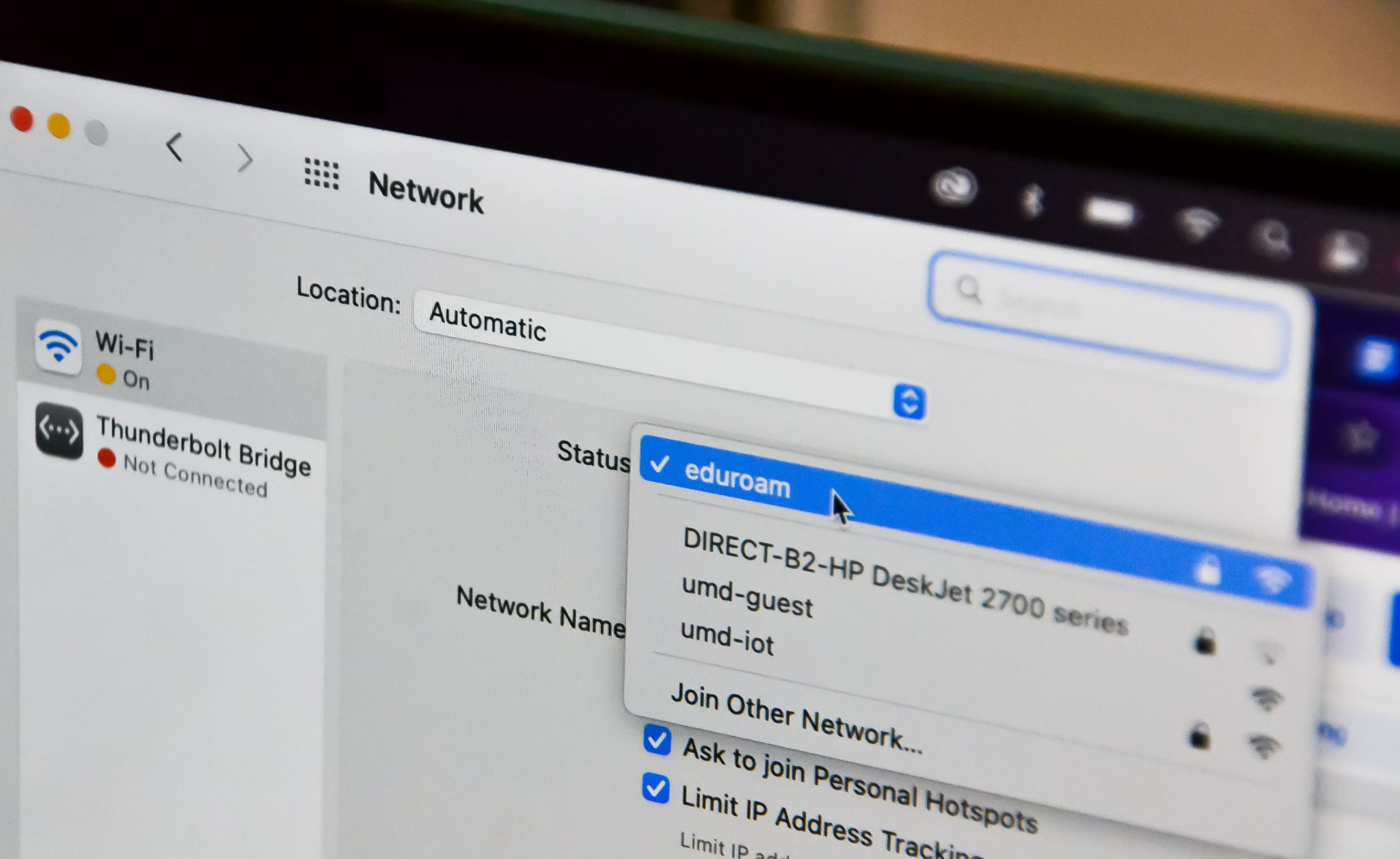 A student's laptop displays connection options as they try to connect to the eduroam Wi-Fi network. Many students have been struggling with their eduroam connection. (Jess Daninhirsch/The Diamondback)

University of Maryland students are continuing to complain that eduroam, the campus Wi-Fi network, has been spotty and sometimes frustratingly slow this school year.

A statement from the Division of Information Technology said the first two weeks of the fall 2022 semester saw 375 reports of wireless issues. There were 536 reports at the same time in fall 2021.

In the past few years, there have been 3,000 new wireless access points installed across the campus, additional layers of security and a revamp of core campus infrastructure, DIT said. Connectivity issues could be due to problems on students’ own devices separate from issues inherent to the network, among other reasons, according to the division.

But the problem is persisting.

It’s a consistent complaint from students, who have said for years that the network is unreliable and showing no signs of improvement.

“It’s annoying that we don’t have any secure Wi-Fi in a lot of places on campus,” senior journalism major Erica Javadpour said. “It ends up taking 10 minutes of class just to get on [the Wi-Fi].”

Javadpour also noted she has had issues with eduroam in McKeldin Library and outside when trying to take Zoom calls.

“One time in the library, when [the semester] first started, it was like a dead zone … that’s the place we’re supposed to be working, and we had absolutely no Wi-Fi,” Seawell said.

Sophomore journalism and psychology major Marissa Yelenik couldn’t connect to eduroam outside of Tawes Hall. While hanging out in front of the building, Yelenik had to move from her spot by the tables because eduroam was so unresponsive, she was forced to use cellular data.

“I’ve definitely had a lot of problems before. A lot of the time I just have to move into a building,” Yelenik said.

Yelenik said the Wi-Fi isn’t any worse than last year but has consistently been spotty.
The network was first created in the European Union as a shared, mobile, secure authentication network to connect students from many institutions to Wi-Fi, said Ann West, associate vice president of the Trust and Identity Division at Internet2, the company that administers eduroam in the U.S.

[VeoRide has been expanding fleet around College Park with e-bikes]

“This is like couch surfing,” West said, making an analogy for how eduroam works. “You put up your couch for others to use and in return, you can use their couches.”

Eduroam incorporates many different authentication methods from libraries, labs and schools and “doesn’t care” which system is used so long as the eduroam SSID or network name is present, said Michael Zawacki, program manager of Internet2’s Trust and Identity Division.

The network builds a secure tunnel to your institution, and it’s up to the institution to decide how it authenticates users.

According to Zawacki and West, the volume of people using the network shouldn’t be an issue as the authentication process is local and only takes a few seconds.

M. R. Sauter, an assistant professor at the information studies college, said in their experience traveling to other institutions using eduroam, connectivity issues are universal.