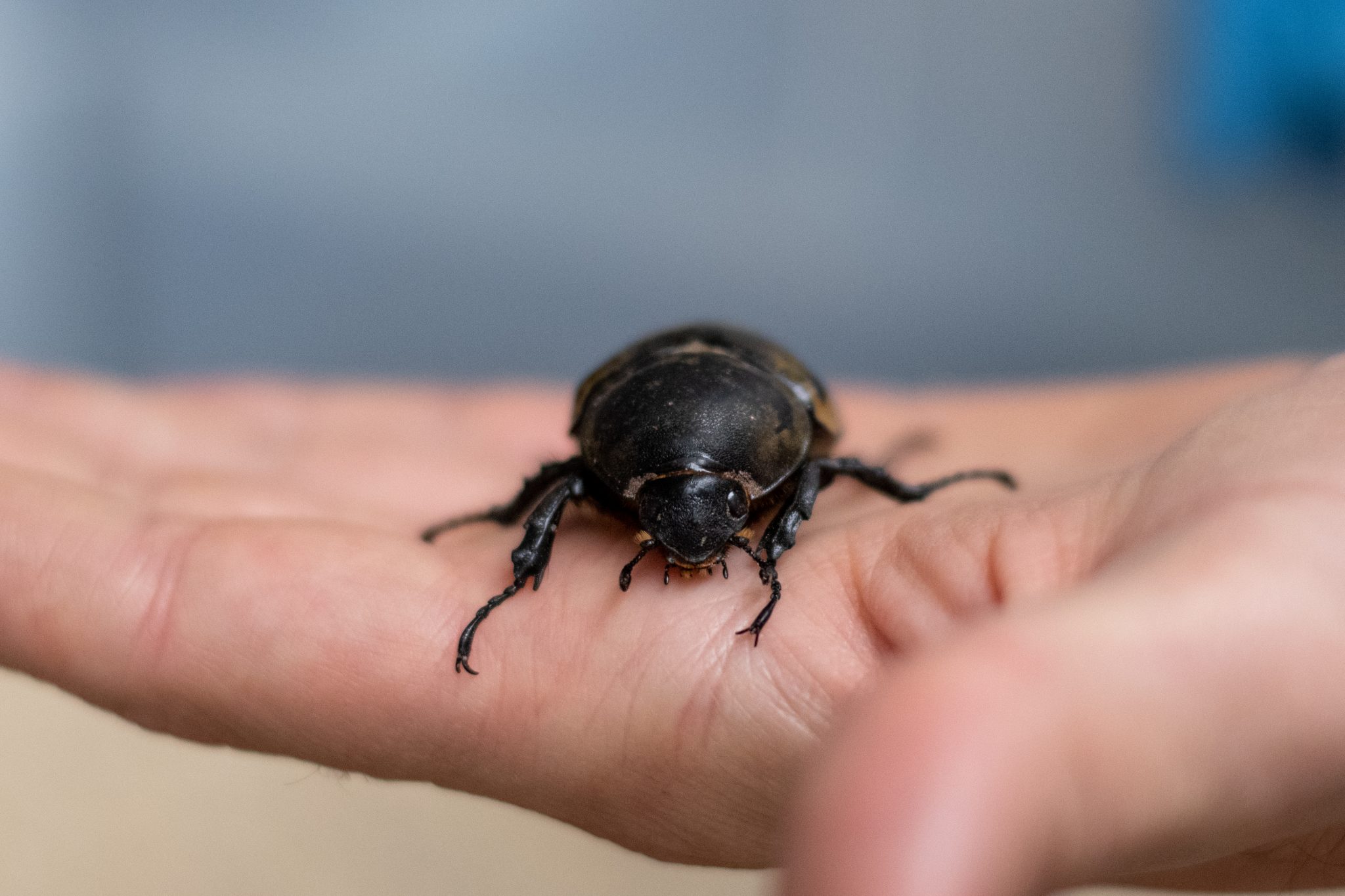 An Eastern Hercules Beetle rests on a staff member's hand in the Entomology Zoo in the Plant Sciences Building on Sept. 21, 2022. (Autumn Hengen/The Diamondback)

Burtonsville Day at the Marilyn J. Praisner Library in Burtonsville was just one of the zoo’s teaching opportunities. Since 2015, the zoo, run by students and faculty from the entomology department and sometimes in collaboration with the University of Maryland Master Gardeners Extension, has visited classrooms and events throughout Northern Virginia, Washington, D.C., and Maryland to give people the chance to interact with all sorts of interesting bugs.

Todd Waters, a faculty assistant in the entomology department and caretaker of the department’s bugs, said teaching people about insects is rewarding.

“People go from being afraid of bugs and swearing they will never hold something to not being able to leave the table because they’re having such a great time. It seems like they’re having a profound change of mind,” Waters said.

Junior biological sciences major Lily Humke was working at the zoo’s tent for the first time after getting involved because of her entomology minor and interest in moths, butterflies and spiders. With a scaly Vietnamese stick bug perched on her hand, Humke talked about how the bug was a beginner pet and mostly produced females in the wild, fertilizing their own eggs and infrequently producing males to increase genetic diversity.

“They focus on staying still and moving slowly … they rely on not looking like anything to eat,” Humke said.

Meanwhile, entomology graduate student Ben Burgunder described how some insect species use nerve clusters called ganglia in its body to move their legs without relying only on signals from the brain.

Burgunder was holding a Madagascar hissing cockroach — which, according to him, is not a fast species, but does use its ganglia to move.

Waters explained how being afraid of bugs might be in our DNA. While some bugs can be dangerous, they are part of our world and play amazing roles in pollinating crops, returning nutrients to the soil and keeping down pest populations, he said.

“I wouldn’t hold a bug if it was gonna hurt me,” Waters said.

Like the other tent staff, Waters gave a detailed explanation of the bow-legged tailless whip scorpion crawling in his hand. The ancient, cave-dwelling creature had a rock-like texture and used its front two legs to feel and create a “3D image of the world” to make up for poor eyesight, according to Waters.

Renee Dollard, faculty assistant in the entomology department, held Rosie the tarantula at the tent. According to Dollard, Rosie is 21 years old, has been with the department a long time and is relaxed compared to the whip scorpion.

Dollard expressed she enjoys meeting the kids interested in bugs.

“Sometimes you key in on another person and you [think], ‘You’re gonna be a future entomologist, I can already tell,’” Dollard said.