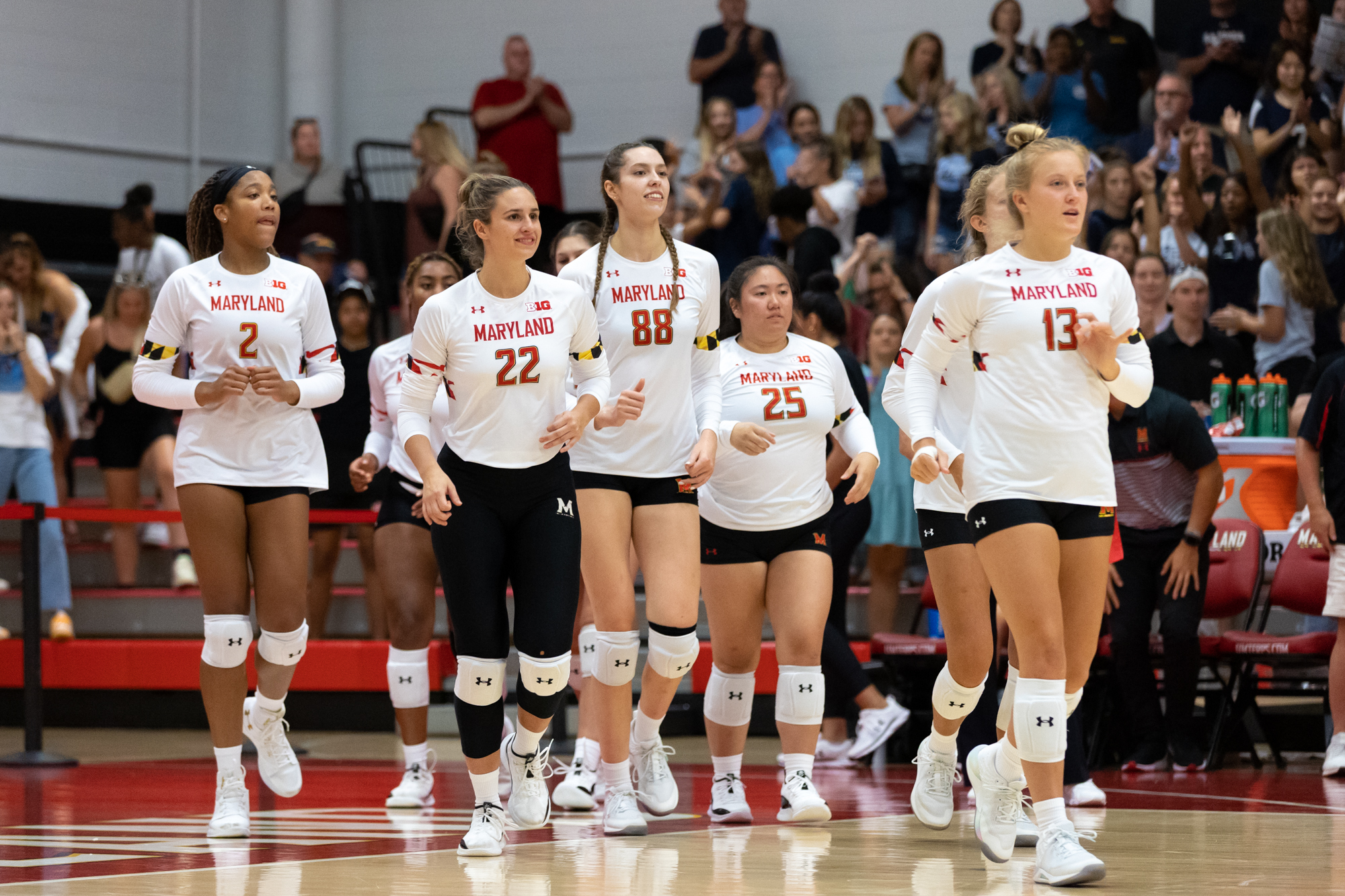 Maryland volleyball during their 3-0 win against Navy on Aug. 26, 2022. (Cam Andrews/The Diamondback)

As the final whistle sounded during Maryland volleyball’s convincing 3-0 victory over Virginia Saturday, the Terps walked off the floor of Memorial Gym with their first tournament sweep in four tries in 2022, finishing 3-0 in their final nonconference round-robin showcase of the season.

Maryland’s impressive outing throughout the Cavalier Classic brought a sound conclusion to a formidable nonconference schedule that saw the Terps churn out nine wins in 12 matches.

While the Terps’ 9-3 nonconference finish is a statistical step back from their 12-0 record a season ago, coach Adam Hughes feels his team’s struggles have better equipped them to compete in the rugged Big Ten.

“We feel like we did a good job with just getting us the nonconference schedule we wanted,” Hughes said. “I think last year when we were winning so much it was more of maintaining stability in nonconference play and now, I feel like we’re putting weeks of practice into things that we’re not great at, and things we are good at, we’re trying to double down on.”

The Terps navigated through a series of challenging nonconference foes, including Arizona and Florida Gulf Coast, the latter of whom qualified for the NCAA tournament last season. Maryland fell in both of those matches along with a five-set defeat at the hands of South Florida, but Hughes believes his team addressed the losses well.

“Obviously, we’d like to come out a little bit cleaner than we are, but I think we’ve learned a ton and I feel like we’ve done a better job this year of just learning and applying,” he said. “I do feel like it’s been a successful preseason for …[our] ability to grow.”

The Terps dive into their Big Ten schedule against a similarly road-tested opponent in Illinois, who will have gone 306 days since their last home game when they take the court Friday night in Urbana-Champaign, Illinois.

Like Maryland, the Fighting Illini pushed themselves with a grueling preseason gauntlet, including three matchups against ranked opponents in Georgia Tech, Washington and Marquette. While Illinois stumbled in all three of those contests, Hughes knows the Fighting Illini are far more formidable than their 5-5 record indicates.

“We threw their stats out immediately,” Hughes said.”If you look at it, they probably played if not the hardest, [the] second hardest nonconference schedule there is … and they haven’t been home yet.”

The Fighting Illini boast a wealth of returning talent from a season ago, including junior outside hitter Raina Terry and redshirt senior setter Diana Brown, who rank among the conference’s top 10 in kills per set and assists per set, respectively.

Terry, who leads Illinois with 129 kills, will have to contend with Maryland’s intimidating middle-blocking duo of Rainelle Jones and Anastasia Russ, both of whom rank in the conference’s top 10 in blocks per set, with Jones’s 1.83 blocks per set average leading the NCAA.

While Jones, a fifth-year Terp, is no stranger to Maryland’s Big Ten bouts, Russ is eager to enter Big Ten competition after spending the previous three seasons in the ACC at Pittsburgh.

“Knowing about the Big Ten’s history and where it’s at right now, it’s obviously like the best conference,” Russ said. “So I’m really excited to have moved up into this conference to play.”

The Terps are hoping their strenuous nonconference schedule will keep them afloat amid the unrelenting wave of Big Ten opponents on the horizon, starting with an Illinois program the Terps have never beat. Maryland holds an 0-11 all-time record against the Fighting Illini.

“We give them respect,” Hughes said. “It’s a program we’ve never beaten before. Obviously, we’d like to change that, but we know we’re gonna have to do the work to make that happen.”