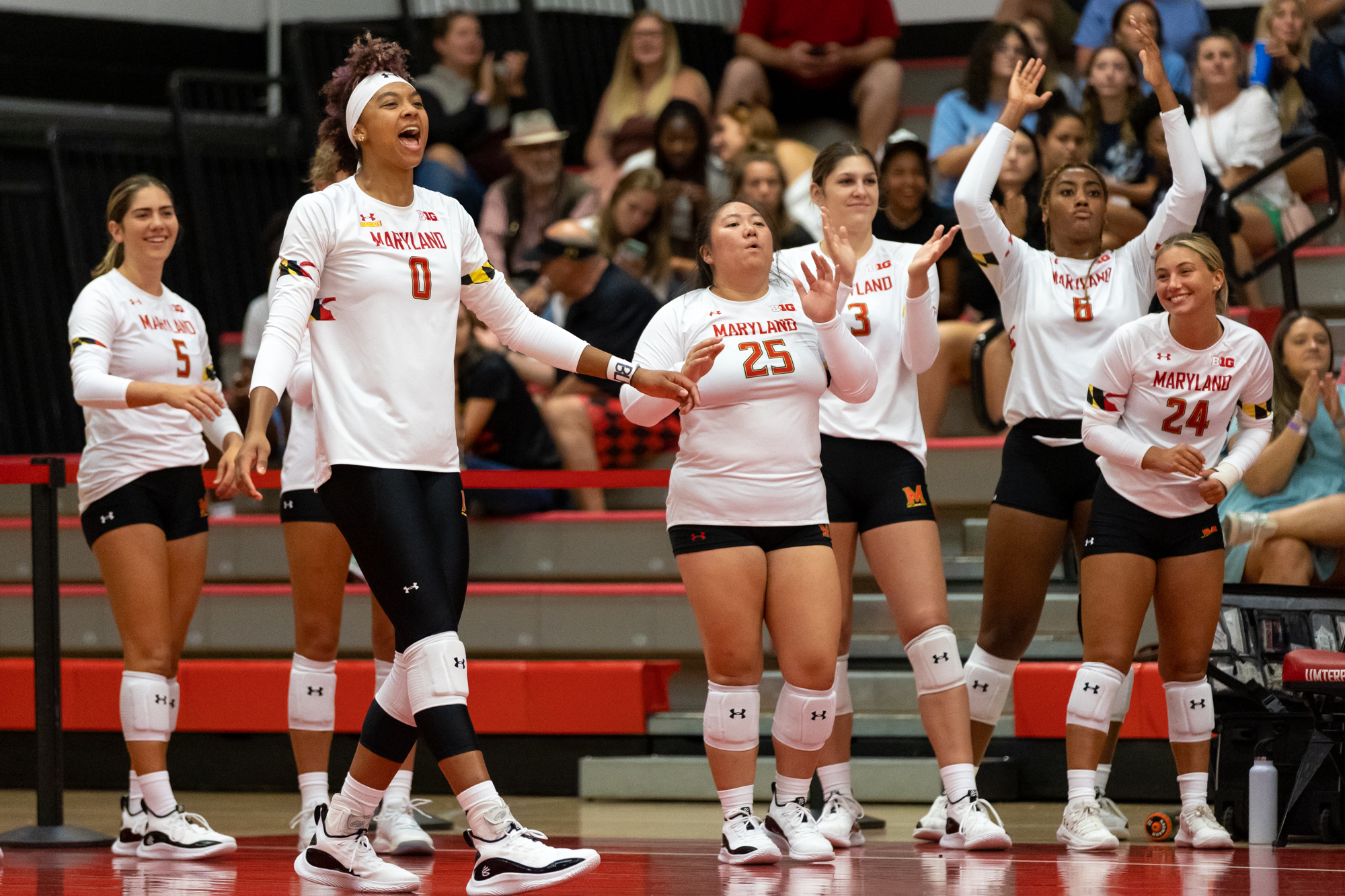 Locked in a back-and-forth battle against Mercer, Maryland volleyball was on the hunt for another critical point to stave off a tenacious Bears effort in the match’s opening set.

The middle blocker stood tall alongside right side Laila Ricks to stymie a Rachel Bell attack, giving the Terps a set point opportunity they cashed in on the ensuing rally.

“She’s a pro … she doesn’t let one mistake lead to another,” coach Adam Hughes said of Jones. “She also does a good job of giving us good energy, [whether] she makes a mistake or she has a great play, she just moves on.”

Jones’ hallmark rejection was the beginning of a weekend rife with milestones and career highs. A host of players notched noble numbers to help the Terps breeze through the Cavalier Classic, dropping only one set en route to a perfect 3-0 weekend.

On the point before Jones’ remarkable rejection, junior outside hitter Sam Csire teamed up with Jones for Csire’s 100th career block, a large figure considering Csire’s offensive role as an outside hitter.

Up next was Milan Gomillion, whose ace in set three marked her 16th on the season, surpassing her previous season high of 15. The third frame also saw the emergence of graduate transfer Gem Grimshaw, who posted her first three kills as a Terp in her first game action since Aug. 27 as she continues to battle an ankle injury.

Laila Ricks’s 300th career kill on the opening point of the fourth set helped Maryland rediscover its mojo after a third set meltdown squandered an opportunity for a sweep.

Sydney Dowler set a new career high with her eighth block of the match to increase Maryland’s lead before Laila Ivey’s 100th career putaway in the set’s closing stages helped the Terps dispatch the Bears, 3-1.

“Laila [Ivey] … had a couple errors and I thought she did a good job just bouncing back, getting us a few key kills there to make sure we closed up shop there in the fourth,” Hughes said.

While Maryland engineered its most proficient offensive showing of the weekend against East Carolina, a trio of Terps reached defensive landmarks. Senior defensive specialist Lexy Finnerty and Gomillion booked their 200th and 650th career digs, respectively.

Meanwhile, sophomore middle blocker Ellie Watson thwarted a bevy of attacks to the tune of a career high five blocks as the Terps sailed past the Pirates in three sets.

“Milan had 18 digs [against East Carolina], so if we’re blocking balls, that’s great,” Hughes said. “We don’t have a lot of opportunities to dig balls, but now we’re at eight blocks and we’re digging 46 balls. That’s pretty good for us.”

Hungry for their first undefeated weekend of the season, the Terps skipped past Virginia in straight sets behind sterling performances from Jones, Dowler and Csire, who were named to the all-tournament team.

Jones and Dowler ran up six and seven blocks against the Cavaliers, respectively, while Csire’s 11 kills gave her 35 on the weekend and earned her tournament MVP honors.

“I thought Sam Csire took some tremendous swings in some key moments for us there late,” Hughes said.

Maryland’s statistically scintillating weekend propelled it to its first undefeated tournament in 2022, leaving the Terps at 9-3 as they enter conference play and starting with a tough road test against No. 25 Illinois Friday.