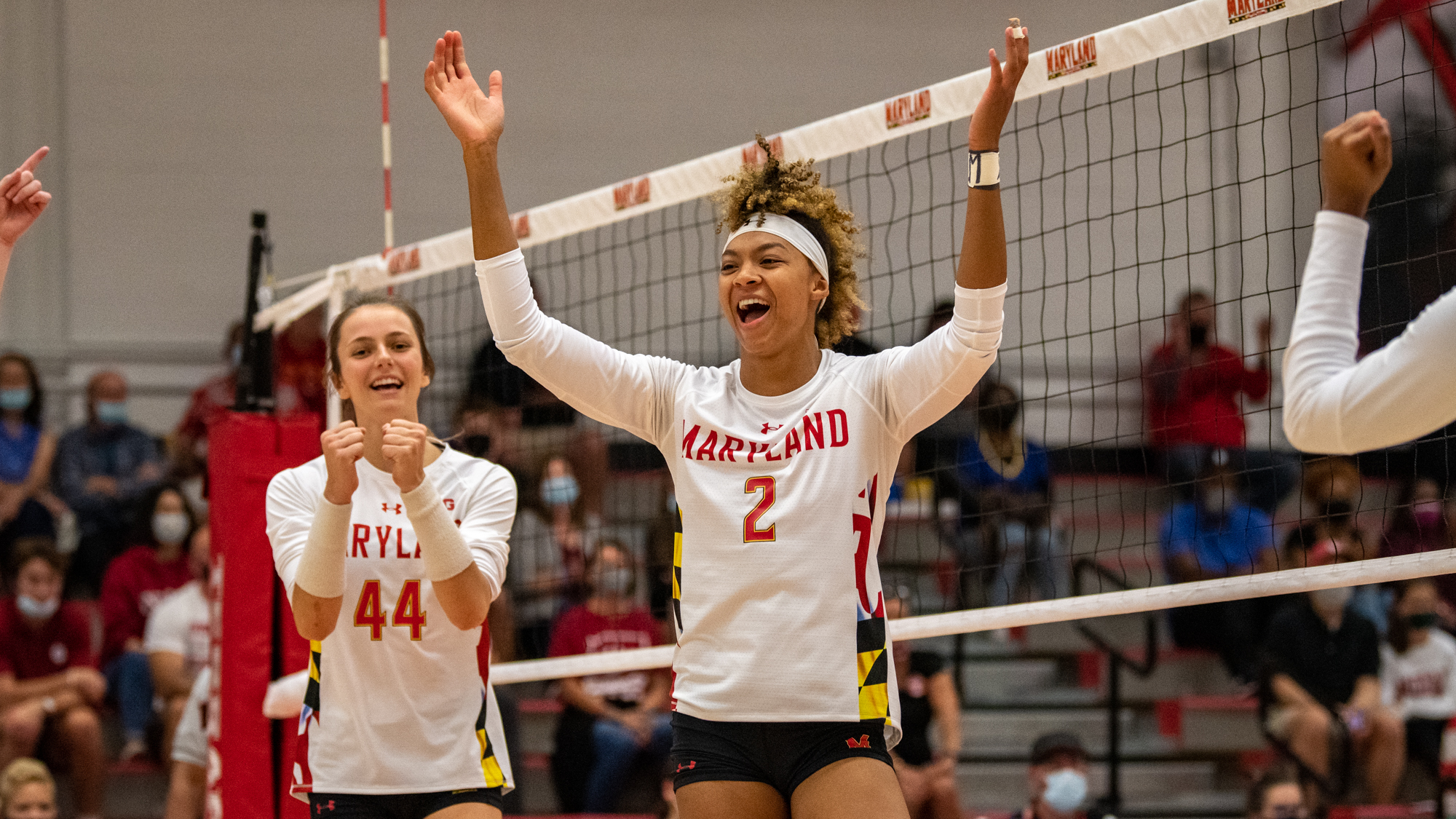 Looking to set the tone on the weekend’s opening point, Mercer’s Annie Karle swung her arms forward, ascended into the air and met the ball at its apex, crushing a Kiera McCarles set toward Maryland’s side of the net.

But one of the nation’s premier blocking team did not budge, as Anastasia Russ and Laila Ricks stonewalled Karle’s spike right back where it came from, giving Maryland its first of a season-high 18 rejections against the Bears.

The play turned out to be a prelude of yet another suffocating defensive production by the Terps, who stifled Mercer on the defensive end before unleashing an offensive onslaught against East Carolina to sweep their doubleheader in the Cavalier Classic.

“Not our greatest hitting efficiency match in the first, but our defense kind of led the way,” coach Adam Hughes said. “And then kind of unique that we flipped the script went the other way … [we] were very offensive in game two.”

Though Maryland struggled to find its offensive rhythm in the first set against Mercer, the Terps capitalized on a litany of errors to inch closer to an opening set triumph until the Bears found life from behind the service line.

Following back-to-back kills by Karle, Mercer took a 20-19 behind their first two aces of the day from Lillian Beardsley, providing a sudden jolt of momentum to a once-dormant Bears squad in set one.

[Maryland volleyball has shown marked improvement from the service line]

But after a Maryland timeout, the Terps pieced together their best sequence of the set.

They overwhelmed the Bears with a set-clinching run keyed by a Rainelle Jones block assist that vaulted her into sole possession of second place in program history among Maryland’s all-time leading blockers.

“She just goes about her business the same,” Hughes said. “That’s one of the things I really love about her maturity … sometimes you don’t know if she’s having a good day or a bad day offensively or defensively.”

Jones’ stellar blocking barrage bled into set two, as the middle blocker stymied the Bears with three of her game-high nine blocks to help the Terps spring to an 8-1 lead.

After being kept off the board in the first set, the Terps found success from the service line in the second behind Lexy Finnerty, whose back-to-back aces ballooned the Maryland lead to 14-5.

The Bears’ offense remained stagnant, mounting just 10 kills and a lowly .103 hitting percentage as Maryland trotted to a 25-17 win.

Mercer grappled with the Terps to a 12-12 tie in set three until Laila Ricks fooled the Bears’ block with a soft tap that harmlessly dropped in no man’s land, kickstarting an 8-2 run as Maryland began closing in on a sweep.

But the fading Bears suddenly found life after two more Karle aces and an Ellie Watson service error. Mercer used three of Morgan Verheyen’s seven kills to snatch six of the final seven points and send the stunned Terps back to the bench with more work to do after a 25-22 defeat.

[Arizona comes from behind in Maryland volleyball’s third loss of season, 3-2]

Ricks opened set four with her 300th career kill as the Terps looked to regather themselves after dropping the third set for the first time this season.

But the pesky Bears continued to hang around behind the hot hand of Karle, who knifed through Maryland’s defense for five of her match-high 17 kills.

While the Terps struggled to contain Karle, the Bears had no answer for Laila Ivey, who seared through Mercer’s defense with a bevy of soaring putaways.

The freshman unleashed six kills, including three in a row, that helped her exceed 100 kills for her career as the Terps chugged ahead, finishing off Mercer in four sets.

“I was actually really proud of the bounce back in the fourth [set],” said Hughes. “I thought we did a good job of just not trying to force it too much.”

Maryland strolled back onto the Memorial Gym floor to battle East Carolina, just one win away from completing their fourth doubleheader sweep of 2022 in as many tries.

The Terps posted 18 kills in the first set to complement a .333 hitting percentage en route to a 25-21 triumph.

Russ and Csire teamed up for four consecutive kills midway through the set to break an 8-8 tie, giving the Terps the cushion they needed to claim a 1-0 lead.

Maryland weathered an early East Carolina outburst to seize control of the second set behind another balanced offensive showcase. Csire and Jones pounded the Pirates with four kills each.

A triage of kills from Csire fueled a backbreaking 9-2 run in the 25-22 comeback victory.

Now one set away from its eighth win of the season, the Terps throttled ahead against a wilting East Carolina team that dropped its first match of the day against Virginia.

Ricks gashed the Pirates from all over the court, dispensing four aces and five putaways as Maryland dumped in 17 more kills to close out the sweep, 25-13.