Arizona comes from behind in Maryland volleyball’s third loss of season, 3-2 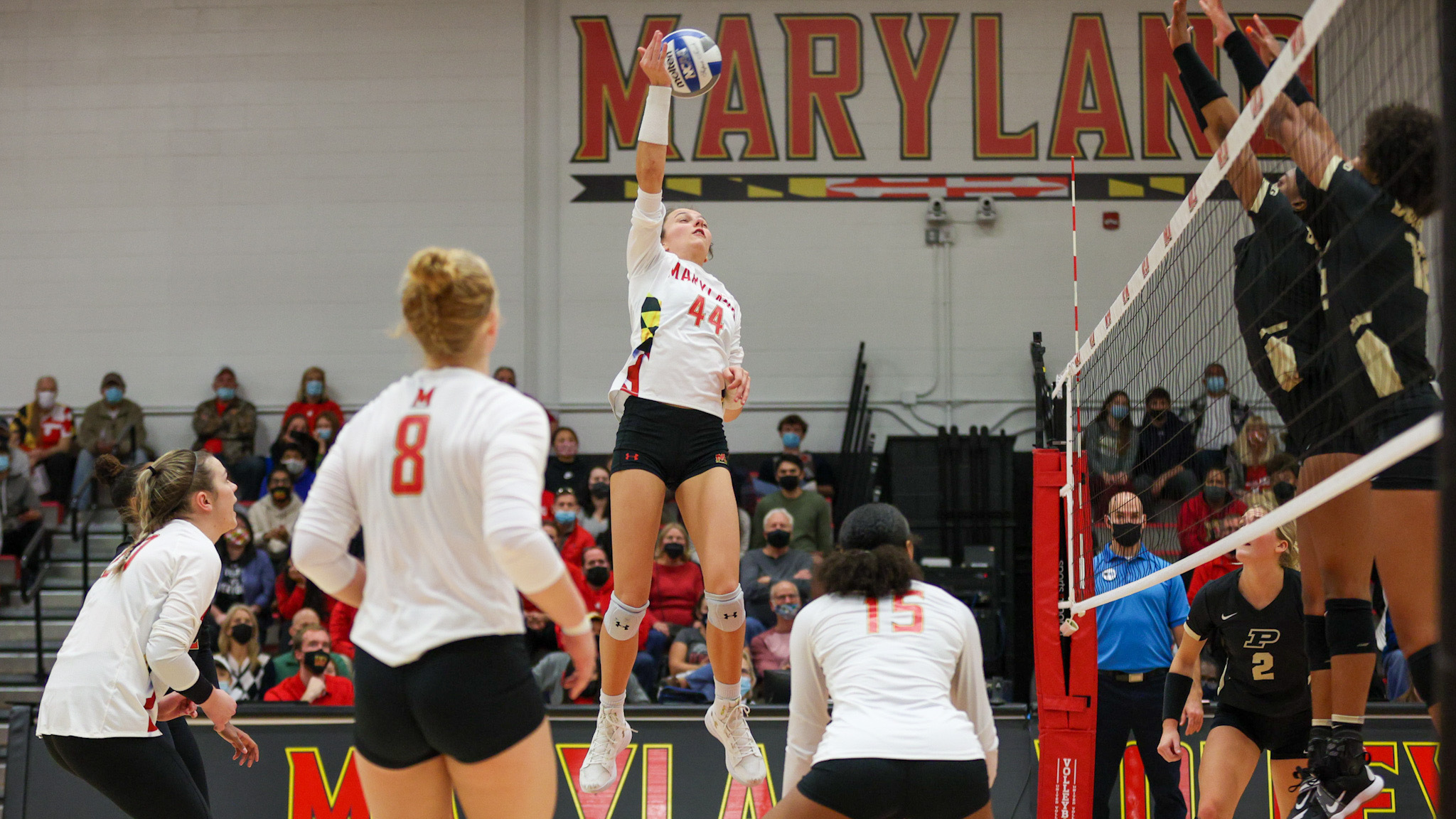 After tormenting the Maryland attack to the tune of seven blocks, Arizona’s Zyonna Fellows switched gears to issue one final blow to the Terps in the fifth set of a heavyweight battle.

Fellows’ 12th kill of the afternoon was the exclamation point of the Wildcats’ comeback victory, as Maryland volleyball fell to Arizona in their final match of the Aztec Classic, 3-2.

“That was probably the best match we played all season,” coach Adam Hughes said. “Realistically, you know, in terms of quality, in terms of play … the environment was great.”

The opening set was the antithesis of each team’s bread and butter, as the two defensive stalwarts were picked apart by the other’s attack. The Terps and Wildcats racked up 14 and 15 kills, respectively.

Fellows pushed the pace offensively for the Wildcats, torching the Terps with four kills in the opening set. The outside hitting duo of Laila Ivey and Sam Csire each matched Fellows’ output to buoy the Maryland offense.

Both sides felt each other out until consecutive aces by Ana Heath gave the Wildcats an 11-8 cushion as they looked to pull away.

But Arizona’s touted defense could not slow the Terps, who used a steady dose of putaways from Ivey and Laila Ricks to stay in the Wildcats’ rear-view mirror until Csire’s second putaway of the frame pulled the Terps even at 21.

The Maryland offense wilted down the stretch, however, only mustering one more kill as late kills by Fellows and Jaelyn Hodge put the Terps on the wrong end of the first set for the third Saturday in a row.

Fellows continued to terrorize Maryland in the second set with four more kills to help Arizona mount a 12-7 lead before the Terps’ defense began to clamp down.

Maryland’s first block of set two came when Ricks and Anastasia Russ teamed up to wall a Jaelyn Hodge attack, bringing the Terps to within one.

Then, after a quiet one-block performance in the opening set, Rainelle Jones stepped up to deny consecutive Wildcat attacks as Maryland sprung in front for the first time in the frame, 16-15.

Arizona clawed back with one of Puk Stubbe’s game-high 20 kills to regain the lead, but their formidable defense had no answer for Csire, who propelled Maryland to a 25-22 win in the second set with a bevy of late putaways.

“I think we feed off of each other … really well,” Milan Gomillion said. “And once one person gets going, everybody else wants to join in.”

For the third time in as many matches, the Terps took the floor in the third frame looking to steal a crucial swing set.

Csire continued her torrid pace, chipping in two more of her team-leading 19 kills as each side went step-for-step with the other, with neither gaining a two-point edge until Hodge’s sixth kill of the match triggered a 5-0 Arizona stretch.

“We were down a couple of points, you know,” said Gomillion, “But we came up in the huddle and said ‘it’s not over till it’s over.’”

The Terps grabbed the first two points out of the timeout, taming the Wildcats’ surge until Jones delivered her biggest set of the weekend.

She first responded to an Alayna Johnson putaway with a kill of her own, trimming the Arizona lead to two.

On the following point, Jones stepped in to stymie a Stubbe spike as Maryland continued to close in.

Jones then pulverized a Sydney Dowler feed following a Laila Ricks ace to give Maryland a lead it wouldn’t relinquish in the set.

The graduate middle blocker’s third kill of the frame capped a vital 7-0 Maryland push that propelled the Terps to a 25-19 set three victory and a 2-1 lead.

Seeking their first undefeated tournament of the season, Maryland dashed to a 5-0 lead in set four behind Dowler’s fourth ace of the day and an Anastasia Russ solo block.

It appeared the Terps were primed to waltz to a victory, but three service errors left the door open for an Arizona comeback.

And after subduing the Terps’ early rush, the Wildcats’ vaunted defense imposed its will when it mattered most.

Three block assists from Fellows shrunk the Terps’ lead to two, and Csire’s 16th kill of the match did little to quell Arizona’s sudden surge, as the Wildcats ripped off their own 5-0 run to snag a two-point lead.

Maryland battled back to even things at 12, but Arizona’s defense was far from finished, as the Wildcats needed only one offensive point in their ensuing 7-0 run that ultimately buried the Terps, pushing them to a decisive fifth set for the second week in a row.

“A few missed serves kind of gave them a window of opportunity and they really … capitalized on it,” Hughes said. “And then on the fifth, I think that gave them a lot of confidence going in.”

The final set quickly morphed into the sequel to last week’s fifth-set flop, as the Wildcats sprinted to a 5-2 lead behind three Hodge putaways.

Russ’ second solo block and ninth kill of the day brought Maryland to within a point, but after imposing their will defensively in the fourth set, it was the Wildcat offense that delivered the final dagger.

Led by Hodge’s five kills, the Wildcats pummeled the Terps with a 12-kill barrage at a scorching .526 clip to send Maryland back to College Park with another Saturday defeat.