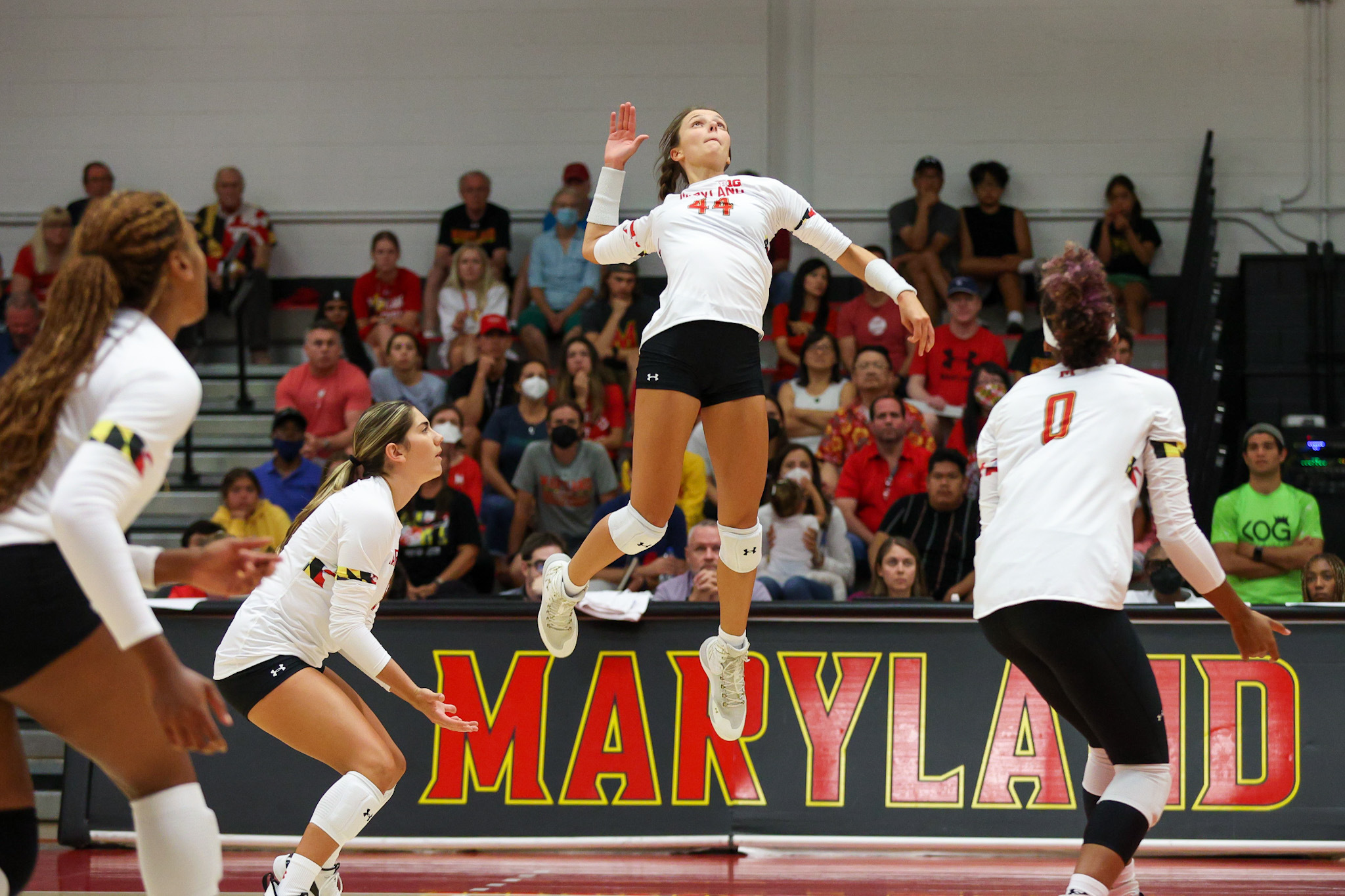 Maryland volleyball has taken its time offensively so far in the 2022 season.

The Terps currently rank fourth to last in the country in total attacks per set, while their 234 kills and 569 total attacks are the fewest totals in Maryland’s first six games of a season since coach Adam Hughes took over in 2018.

Despite their deliberate pace, the Terps have nonetheless succeeded on the attack.

They currently stand 33rd in the NCAA with a .281 hitting percentage and have raced out to four wins in their first six matches, including a pair of victories at the Stony Brook Invitational last weekend.

Maryland carved up Georgetown and Stony Brook Sept. 2 with a methodical offense to the tune of 74 kills and a proficient .318 hitting percentage across the two matches, defeating both teams in straight sets.

While it may not be at the pace he had envisioned, Hughes is pleased with his team’s offensive output.

“Realistically I feel like the offense is there,” he said. “I do like the style in which we are playing. I think that the team is pretty aware of how we’re trying to go about it.”

The Terps have benefitted from a host of contributors on the offensive end, with five players posting at least 30 kills in 2022.

The duo of outside hitters Sam Csire and Laila Ivey leads Maryland in kills with 60 and 56, respectively, while junior right side specialist Laila Ricks poured in 24 of her 37 kills on the season in the Stony Brook Invitational.

“It’s great to see [Ricks] getting her confidence back,” Csire said. “It helps us spread out our offense more.”

The Terps’ deliberate attack will be tested against a triad of formidable opponents this weekend in the Aztec Classic.

Following a Friday doubleheader against a battle-tested San Diego State team and a stingy Sacramento State squad, the Terps conclude their road trip Saturday against a suffocating Arizona defense.

Despite a 2-4 record, San Diego State already played two teams currently ranked in the AVCA Coaches poll: No. 15 Baylor and No. 24 Pepperdine. The Aztecs even stole a set against the Bears before falling 3-1.

Meanwhile, Sacramento State and Arizona boast imposing defenses, as each team has held its opponents to a sub-.200 hitting percentage. The Wildcats’ .102 opponent hitting percentage ranks fourth best in the country.

Quality offensive touches are crucial for the Terps to help chisel through a sturdy defensive block. Maryland’s defense and serve receive, two of its strengths so far this season, are vital in maximizing the squad’s offensive opportunities.

“We’re really trying to scrap at the margins here and find ways we get more swings,” Hughes said. “And I think that’s a big thing for us going forward.”

With a 4-2 record, Maryland plans to use its first trip to California since 2016 as an early opportunity to boost its resume as the team pursues its first NCAA tournament berth in 17 years.

“We knew we kind of signed up for this,” Hughes said. “We try to play as many matches in the nonconference as possible just because it’s a grind in the Big Ten … I think it is a challenge, but I also know a lot of other teams are doing the same thing. So it’s kind of an ‘us versus them’ kind of deal, and I like where the team’s mentality is on that.”