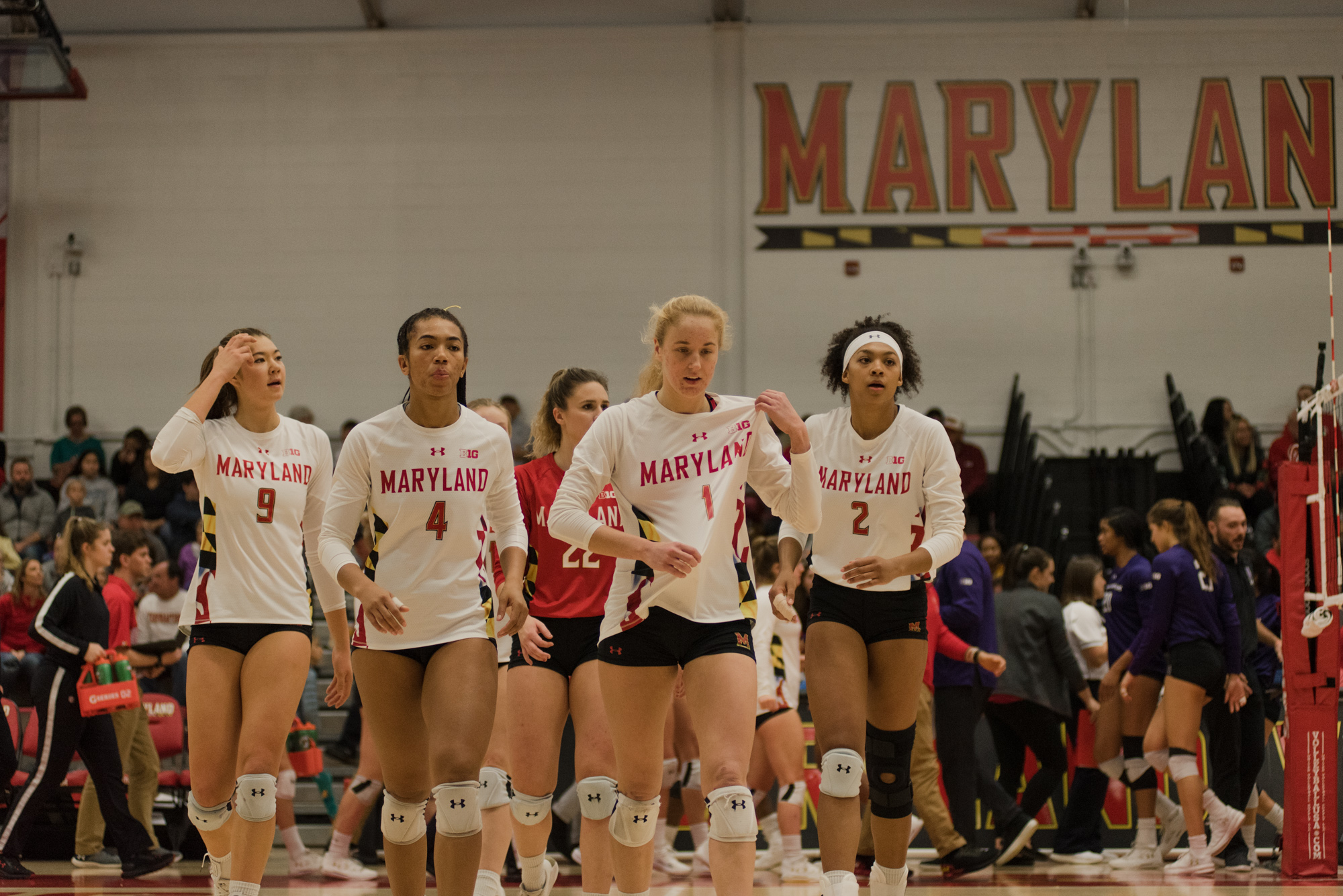 An exhausted Maryland volleyball team could only watch as Tizi Puljiz’s serve fluttered harmlessly to the floor of the Pritchard Gymnasium court, bringing a stunning South Florida rally to a crescendo Saturday afternoon.

Puljiz’s ace sealed Maryland’s fate in a decisive fifth set as the Terps saw their dominant weekend come to a frustrating end against South Florida, dropping a five-set thriller to cap a 2-1 weekend at the Stony Brook tournament.

“You know, honestly I don’t think we played well all weekend,” coach Adam Hughes said. “We are a little inconsistent up and down.”

After their doubleheader the previous day, the Terps marched back onto the hardwood for an early-morning match against the Bulls.

With an unusually early 10 a.m. start time, Maryland sleepwalked in the opening set, hitting a dismal -.286 and committing seven attack errors as it fell behind to South Florida 11-6, prompting coach Adam Hughes to spend a timeout.

The Terps inched their way closer as they continued to find their footing offensively, aided by three consecutive errors from the Bulls and an ace from Laila Ricks.

Trailing 18-16, Rainelle Jones flashed from left to right, unleashing a vicious putaway to bring Maryland within 1 as it appeared the Terps were primed for another late-set avalanche.

But Maryland squandered a chance to tie when Erin Engel’s serve went awry, sparking a 4-1 Bulls run as the set continued to slip away. The Terps could not overcome their dismal .103 hitting percentage and eight attack errors as the Bulls charged ahead to the finish.

After Ally Barnhart’s third kill of the set gave the Bulls set point, Alexis Williams pinpointed the ensuing serve down the line for an ace, capping a forgettable opening frame for Maryland.

“I thought we didn’t start on time in the first [set] today,” coach Adam Hughes said. “Realistically we had a chance to win the first set and make this a 3-0 sweep.”

After dropping only their fourth set of the season, the Terps quickly regrouped.

After a dump kill from Sam Csire broke a 7-7 tie, Maryland ripped off five of the next six points to build a comfortable cushion for the first time.

As the Maryland block continued to tame the Bulls’ attack, the Terps’ high-flying offense finally emerged from its slumber, posting a .308 hitting percentage in a much-needed bounce-back set.

“Every time when we get kind of in a sticky situation, we just remind ourselves to be free and just play our game and don’t focus on the other side of the court,” said Csire, who led Maryland with nine kills.

A timeout from South Florida’s Jolene Shepardson backfired, as the Bulls committed four straight errors, helping the Terps extend their lead even further.

Back-to-back kills from Csire and Sydney Dowler pushed the set to the brink, which Rainelle Jones sealed with a laser that skipped through the South Florida block.

The Terps’ blazing run pervaded into the third set as they grabbed six of the first eight points, highlighted by Jones’ pulverizing solo block against a Marta Cvitkovic attack.

Cvitkovic responded with a pair of kills to lead a 3-1 Bulls jolt, but her service error moments later opened the floodgates for Maryland, who utilized a pair of aces from Dowler to double up the Bulls 14-7.

South Florida rallied, however, behind a 5-0 run that included a trio of aces from
Cvitkovic, to put the pressure on Maryland.

A Laila Ivey attack error dwindled the Maryland advantage to 23-20, but South Florida’s ninth and tenth errors of the set gifted the Terps a set three victory.

Looking to stay alive, the Bulls finally regained traction in the fourth set. Cvitkovic picked apart the Terps’ block with seven kills as the Bulls rode a .450 hitting percentage to swing the momentum back in their favor.

“I think those are kind of examples where we need to finish out and keep putting our foot on the pedal,” Csire said.

With South Florida leading 15-12, Cvitkovic’s final kill of the frame ignited a 6-0 Bulls run that put Maryland on the ropes.

An ace by Dowler stopped the bleeding temporarily, but two more costly errors helped set up the Terps’ first decisive fifth frame of the season.

With their eleventh set in 24 hours on the horizon, Maryland looked to regroup and end their weekend on a resilient note.

But the Terps just couldn’t keep up.

Finding themselves in a race to 15 points, the Terps spun their wheels as they could only watch the Bulls accelerate to a 4-0 lead.

Kills by Cvitkovic, Tizi Puljiz and Ally Barnhart forced a Maryland timeout, but the Bulls grabbed the next three points as Cvitkovic and Puljiz poured in additional putaways.

The once-impenetrable Maryland block became increasingly porous with every Bulls attack, until Puljiz’s ace was the fatal gash for the Terps, who dropped the decisive set 15-4 to finish the weekend on a sour note.

“You know, we knew the challenge was going to be good and we knew that they battle,” Hughes said. “We just got to be a little bit more consistent.”