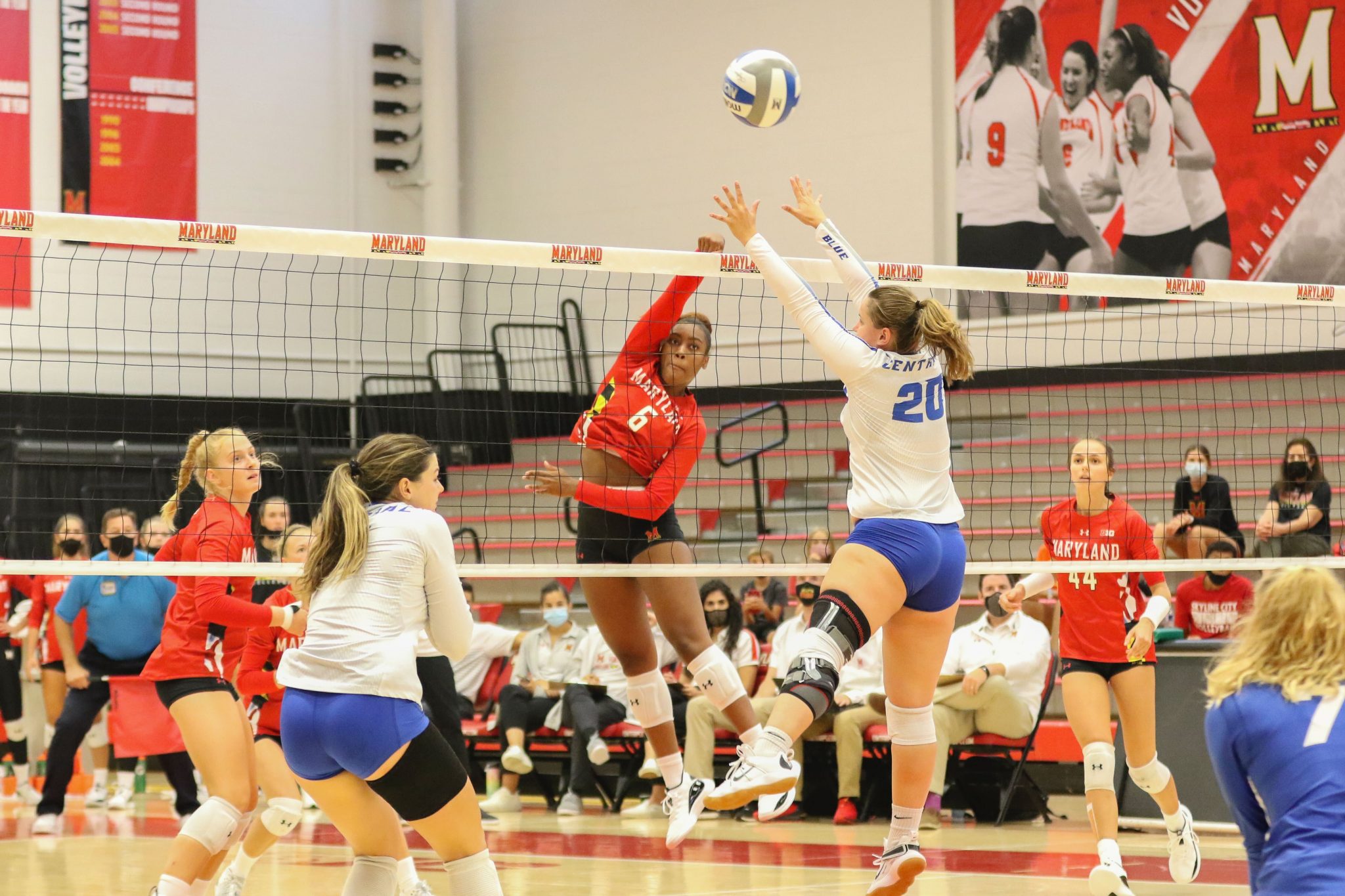 Laila Ricks rises up for a kill during Maryland volleyball’s 3-0 sweep against Central Connecticut State on Aug. 28, 2021. (Cam Andrews/The Diamondback)

Already having a career day, Laila Ricks came through when her team needed it.

With the Terps locked in their most strenuous set of the day, the junior right side specialist elevated, loaded up and muscled a kill through the Stony Brook block, capping a crucial 6-1 run as Maryland scratched across a hard-fought victory in its second set against the Seawolves.

It was smooth sailing from there for the Terps, who used Ricks’ 16 kills across the team’s two matches to romp to a pair of sweeps against Georgetown and Stony Brook to open the Stony Brook tournament.

“She played with a lot of confidence,” coach Adam Hughes said of Ricks. “She bounced back … had kind of a tough week in practice but stayed with it.”

The Terps cruised in the first set against the Hoyas, keyed by a .406 hitting percentage in which six different players logged a kill.

Maryland opened the set on a tear, using putaways from Sam Csire and Laila Ricks to jump on Georgetown early.

Georgetown hung with the Terps riding the hot hand of Mary Grace Goyena, who blitzed Maryland’s block with a quartet of kills, including three in a row midway through the set to give the Hoyas some life.

But Maryland’s balanced attack proved too sturdy for struggling Georgetown to overcome.

Laila Ivey continued her torrid start to the season with four kills in the first set, while Csire and Ricks each chipped in three.

The teams traded points down the stretch until Jones’ fourth kill of the set cemented a 25-15 Maryland win.

Ricks shined in the second set for the Terps, pouring in five kills, a pair of service aces and a block assist as Maryland cruised to a 25-14 victory.

The right side specialist had her way with the Hoyas throughout an 11-2 run that gave Maryland some breathing room after Georgetown nabbed three of the frame’s first four points.

She matched her career-high with ten kills against the Hoyas and capped her dominant set with a punishing finish that careened off the chest of Peyton Wilhite to put Maryland one set away from another sweep.

“[Ricks’ performance] was huge for her and for our team,” Csire said. “We all have confidence right now in her and every other hitter.”

The Terps delivered their best defensive set of the match, holding the Hoyas to a measly .036 hitting percentage and benefitted from eight attack errors. They also racked up five blocks, including an early solo rejection from Russ that set the tone for the Terps’ suffocating set two performance.

The Terps did not let up in the third set as they hunted their third sweep in four matches.

The Terps wouldn’t enjoy similar success early in their second match, however, as they struggled in their opening evening set against Stony Brook before battling back late.

After a stout all-around performance against the Hoyas, the Terps came out sluggish in the first set as the Seawolves jumped out to a 10-7 lead.

Maryland relied on its defense to climb back into the set, using back-to-back block assists by Russ and Ricks to knot the set at 10 even as they struggled to find their offensive rhythm.

Trailing by two, the Terps finally broke through, rattling off five straight points to take a 21-16 lead.

A pair of diving digs by Gomillion led to an Ivey kill that gave the Terps a 24-19 lead before Dowler’s sneaky dump-kill capped Maryland’s first set rally.

“We know last week’s practice wasn’t the best,” said Csire. “From now on, we’re gonna work on what we need to and being able to not freak out in the middle of a set and be able to relax and just play our game.”

Maryland appeared poised to run away with the second set as Csire soared for an attack from the left side with Maryland leading by 1, but her misfire evened the score at 13 as the Terps continued to trudge through their offensive struggles.

A cross-court stinger from Ivey broke a 16-16 tie, kickstarting a 3-0 burst to give the Terps a long-awaited boost.

Stony Brook refused to go away, however, as Kali Moore pounded a kill that sizzled off Gomillion as the Seawolves clawed back to tie the set once again.

But in what has become a common theme in the early stages of the season, the Terps’ poise helped them claw out a sweep.

The Terps capitalized on a Moore misfire to take a 20-19 lead, then rode a lengthy service rotation by Lexy Finnerty to take five of the final six points of the set. Just as she did against Georgetown, Ricks took control in the second set, scoring Maryland’s last three points, with her final kill pinballing through the Seawolves block to seal a gritty 25-20 triumph.

On the brink of being swept, the Seawolves grabbed the first three points of the third set, but were quickly steamrolled by a 8-0 Maryland onslaught highlighted by two service aces from Gomillion, part of Maryland’s 17 on the day.

“That’s what sets up our defense,” Hughes said of the Terps’ success from the service line. “When we were rolling today it was because we were causing a lot of damage from the end line.”

The Seawolves’ bid for a rally was stymied by the Terps’ relentless block, which held Stony Brook to a .027 hitting percentage throughout the match en route to a 25-16 closeout victory, capping Maryland’s second doubleheader sweep in as many weeks.