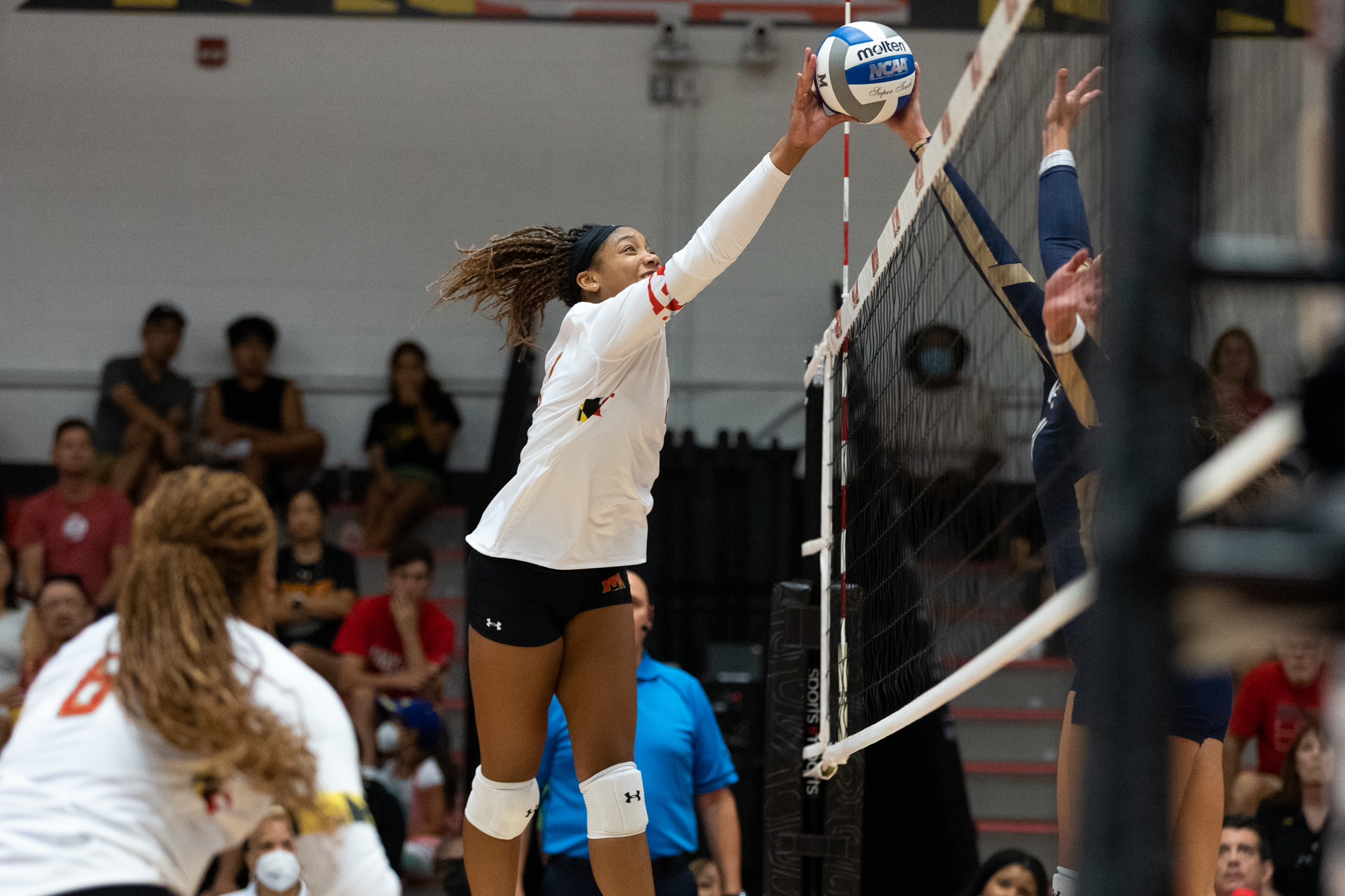 Laila Ivey retreated behind the 10-foot line, flipped her hips and propelled forward, gearing up to launch another devastating attack on the Rhode Island block.

Junior setter Sydney Dowler lofted a pass in Ivey’s direction and the freshman took flight, soaring through the air to pummel a cross-court missile past Rhode Island libero Abby Fillion. The kill put Maryland a point away from taking its opening set of the season.

Friday’s first set was merely the beginning of a strong weekend for the Maryland native, who racked up 28 kills across 10 sets throughout the Maryland Invite. The Terps went 2-1 to open the 2022 campaign.

“She did amazing,”  junior outside hitter Sam Csire said. “She did better than I did my first game.”

Despite her confident appearance, Ivey’s debut did feature first-match jitters, ones coach Adam Hughes helped to suppress with a reference to an NBA Finals MVP.

“She really likes Kevin Durant, so I sent her a text last night just saying about how he said he had nerves coming back from his injury,” Hughes explained after his team swept Rhode Island and Navy Friday. “I told her it was okay to have a little nerves, and I thought she handled her role pretty well tonight.”

The true freshman entered the starting lineup after the departure of outside hitter Paula Neciporuka. Her explosiveness and athleticism made her an immediate offensive threat opposite Csire, who played a hand in soothing Ivey’s first-match nerves.

“She also told me she was nervous before the game and I was like, ‘Everyone’s in your shoes at one point,’”  Csire said. “In my freshman year I was the same way, and I just told her, ‘Relax, as soon as you get the first hit out of the way, everything just goes away.’”

Ivey finished her first match with 12 kills and helped Maryland sweep Rhode Island. She chipped in six more against Navy later that evening. She added 10 putaways the following night against Florida Gulf Coast, who qualified for the NCAA tournament a season ago.

“We call her Livey, ‘L-I-V-E-Y,’ because we have Laila [Ivey] and Laila [Ricks],” explained Hughes, who praised Ivey for quickly immersing herself in the rotation. “She’s learned a lot in a short amount of time.”

Ivey has plenty of eyes on her as a true freshman with a starting role for a Big Ten team. But the outside hitter hasn’t let the spotlight distort her team-first mindset.

“Honestly, just being aggressive and just trying to do my part [for] the team, getting points up and just hyping my teammates up,” Ivey said of her approach following the team’s Red-White scrimmage Aug. 20.

As the weekend progressed, Ivey looked increasingly comfortable while settling into her role as Maryland’s freshman phenom.

Though she wowed the Xfinity Pavilion crowd with her bevy of kills, Ivey also contributed heavily on the defensive end, tallying four block assists in her second career match to help limit Navy to a .064 hitting percentage.