Maryland volleyball has shown marked improvement from the service line 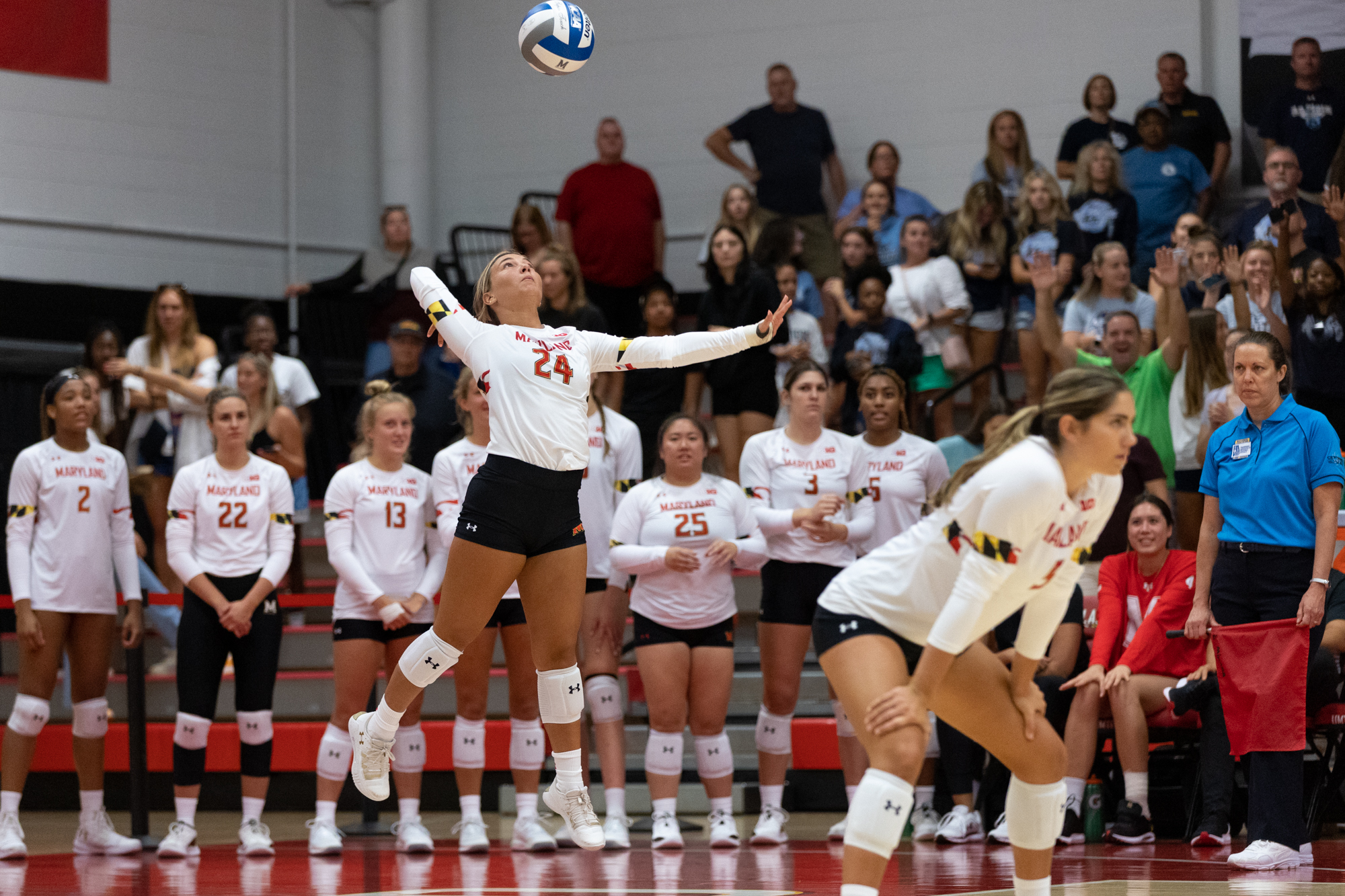 Maryland volleyball had plenty to gush over in a week headlined by victories over San Diego State and Sacramento State in the Aztec Classic.

Throughout their three matches in the tournament, the Terps set season highs in kills twice, logged their three highest assist totals and racked up 35 more total blocks over the weekend to bolster their NCAA-best 3.21 blocks per set average.

But perhaps the most inspiring number came from behind the endline. The Terps’ servers feasted throughout the weekend to the tune of 30 service aces.

“The aces are a byproduct of our serving strategy,” coach Adam Hughes said after Maryland’s Sept. 9 doubleheader. “I always want aces if I can get them, but realistically our goal is to get teams out of system as much as possible.”

[Arizona comes from behind in Maryland volleyball’s third loss of season, 3-2]

“I feel like we are a really good serving team, and we’re coming at you different ways,” Hughes said before the Aztec Classic. “And you know, that is something that we progressed a lot from last year, just the number of servers we have available to us.”

Maryland’s gleaming weekend from the service line was the latest progression of its improvement from a season ago. The Terps have tallied 73 aces throughout their first nine matches in 2022, compared to only 47 through their first nine contests last season.

The new wrinkle to Maryland’s success has been a collective effort. Six players have logged at least five aces throughout Maryland’s nonconference slate.

While junior setter Sydney Dowler remains Maryland’s top serving threat, the Terps have also been boosted by the duo of libero Milan Gomillion and right side specialist Laila Ricks.

Gomillion bombarded San Diego State with a match-high five aces, topping her previous career-high of three. Having already matched her 2021 total with 15 aces this season, the sophomore libero’s confidence has flourished amid her increased role behind the service line.

“I totally think last year, I could admit I was a bit more nervous,” Gomillion said after Saturday’s match against Arizona. “But I think I definitely went at it this year. I had no fear, no worry, and just went after it behind the endline.”

Gomillion isn’t the only player whose serving prowess has blossomed. Ricks has notched 12 aces in 2022 since transitioning to pin hitter from middle blocker, where she played throughout her first two seasons in College Park.

“She’s a tremendous athlete,” Hughes said. “She’s developing a lot in the last year and a half … I think she’s embraced the role.”

Sitting at 6-3, the Terps will gear up for the final leg of their nonconference gauntlet, with matchups against Mercer, East Carolina and Virginia on the horizon.

While the Terps aren’t looking to make any serving adjustments from their end of the court, their back line will be tested against a Mercer squad armed with five players who have logged at least 10 aces thus far in 2022.

“That’s one thing you see across the board, no matter how physical teams are, [it] seems like everyone can serve and pass,” Hughes said. “So we know that’s kind of a big thing for us, and it’s a big focus on us being the best we can be.”