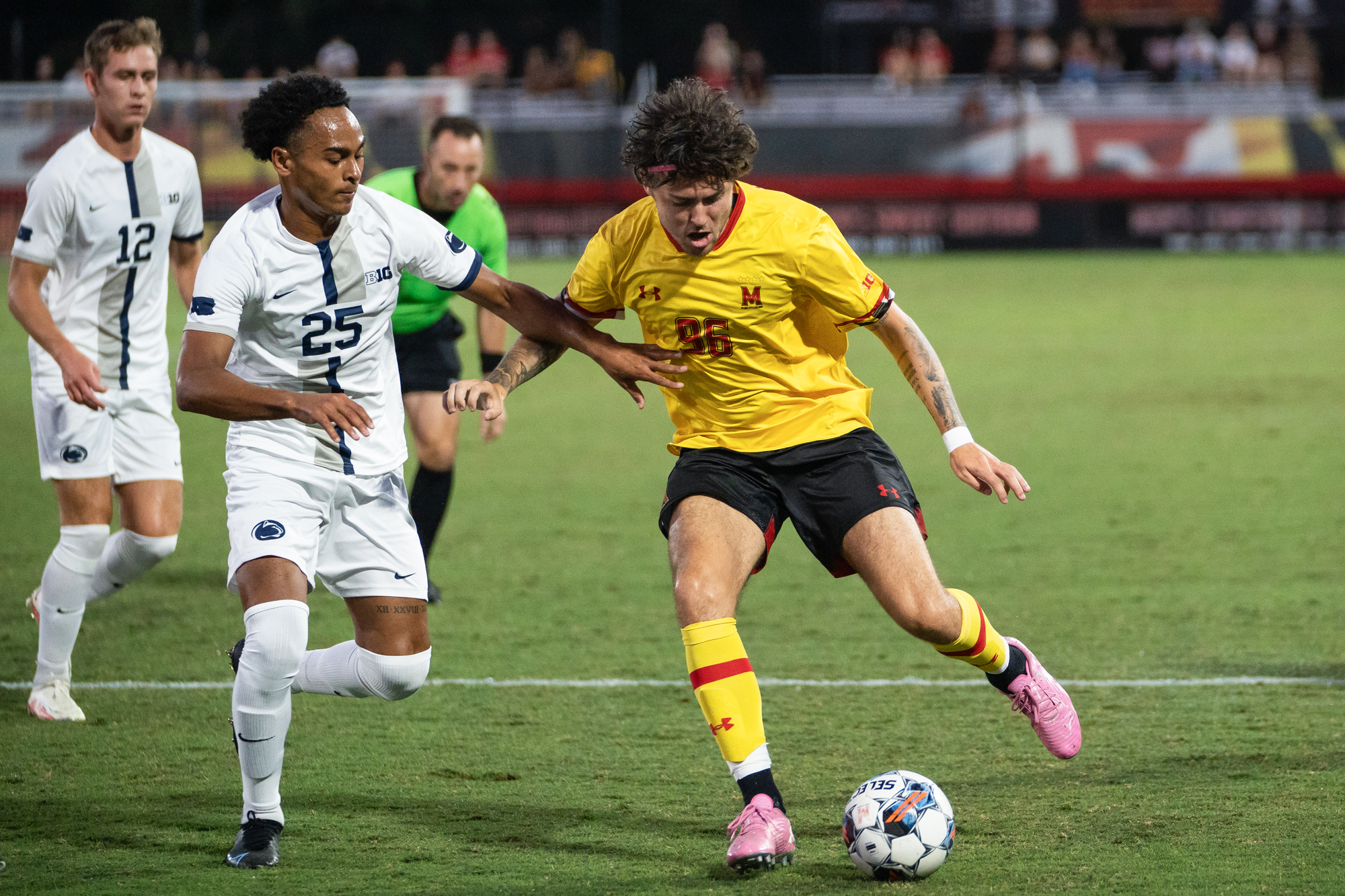 Jamie Lowell played a short pass on a goal kick as Maryland men’s soccer looked to maintain its late lead.

What appeared to be a routine ball to William Kulvik turned into an opportunity for Penn State after Kulvik’s clearance was blocked. Lowell failed to corral the ricochet before it fell to Tyger Evans, whom the goalkeeper upended.

The referee pointed to the penalty spot, Evans stepped up and found the bottom left corner before jogging over to celebrate with his teammates on the sideline.

The Terps surrendered their second lead of the night through a self-inflicted lapse, something coach Sasho Cirovski felt his team struggled with throughout the match.

“We certainly did enough to win this game,” Cirovski said. “But we also, once again, made a lot of critical errors that cost us three points today. That part was very frustrating.”

Penn State took the lead through two strikes in the first half, which Cirovski felt his defense could’ve prevented.

Maryland conceded its first goal from a set piece in three games when Femi Awodesu’s header crept past Lowell to tie the game at 1-1. Minutes later, Evans burst forward following a giveaway by the Terps before finding Peter Mangione, who powered his curling strike past Lowell.

“We just have to become a little stingier and have to be more resolute defensively,” Cirovski said. “They got a goal on a corner, that shouldn’t happen. And then they got a goal on the counter where we had the ball in this half of the field and very carelessly gave it away.”

The Terps reclaimed the lead in the second half, but Evans’ penalty kick after a scramble in the box was another Maryland error that caused it to drop its first points in Big Ten play this season.

While satisfied with the team’s response coming out of halftime, junior Alex Nitzl was disappointed with the team’s defending on the Nittany Lions’ last goal, saying the Terps “just make it easy for other teams right now.”

Despite shipping the highest amount of goals it has all season, Maryland still scored three times and registered more than double the amount of shots against its conference rivals.

Cirovski noted he felt his side controlled the match and generated some good scoring chances, but Penn State was able to take advantage of his squad’s defensive blunders.

“The moments when we were up we can definitely look after and say, ‘That’s exactly how we want to play,’” Chris Rindov said. “We just have to keep going through the whole game as opposed to going [through] ups and downs.”

Rindov said due to the quality of conference opponents, the Terps must focus on improving their defensive consistency as they aim for conference silverware.