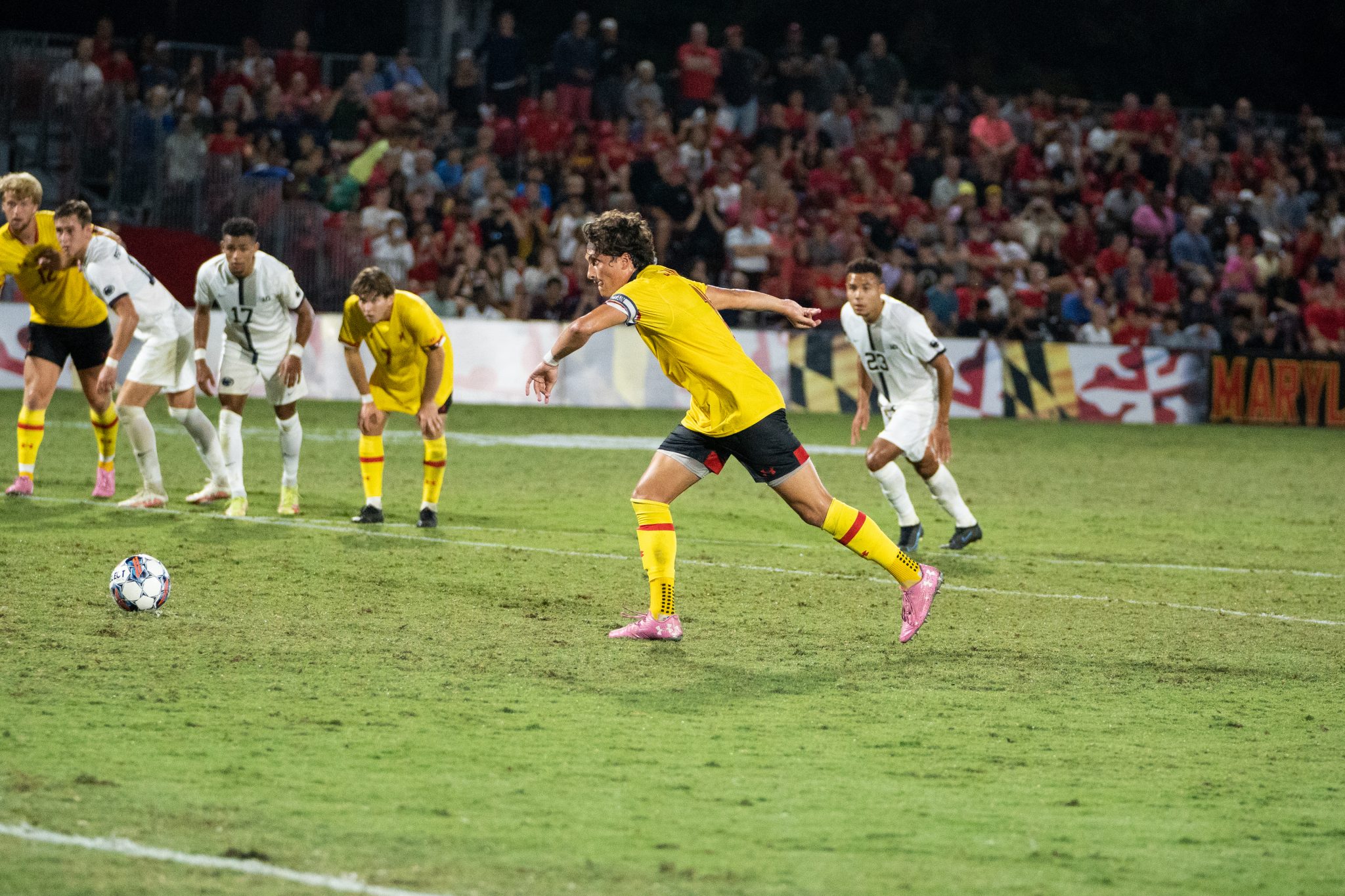 Luca Costabile floated a cross into the penalty box that Max Riley got a touch on before being flattened by a defender.

The referee pointed to the spot and Malcolm Johnston lifted his third penalty kick in four matches into the top right corner, reclaiming the lead for the Terps in the 70th minute after falling behind in the first half.

However, the one-goal advantage wasn’t enough in a matchup that has consistently produced plenty of scoring.

The Nittany Lions won a penalty of their own just five minutes later to equalize, extending No. 9 Maryland’s winless streak against Penn State to five matches in a 3-3 draw. Both sides dropped their first points in Big Ten play after winning their opening conference game of the season.

“We know our games with Penn State get a little crazy, a lot of goals every year, and again tonight was similar,” coach Sasho Cirovski said. “It’s not the end of the world, it’s looked at as two points lost and we move on.”

The Terps and Nittany Lions had combined for at least four goals in their last five matchups. They almost reached that mark in the opening half.

Maryland created multiple shots early in the match after settling into the game and broke through in the 17th minute.

Nick Richardson brought down a looping pass before driving down the end line and powering a shot past Nittany Lions goalkeeper Kris Shakes. The redshirt senior wheeled away toward the corner flag to celebrate his second career goal, two games after he notched his first against Georgetown.

Penn State came close to equalizing straight from kick off after Seth Kuhn’s strike eked past goalkeeper Jamie Lowell, but Chris Rindov headed the ball off the line. Lowell started in goal for the second-straight game after Niklas Neumann was held out with a knee injury again, according to a team spokesperson.

The Nittany Lions continued to stream forward and quickly equalized off a set piece in the 20th minute. Kuhn swung in a cross from a short corner kick that Femi Awodesu directed past Lowell, who got a hand to the header but couldn’t keep it out.

Maryland lost the ball in its attacking half eight minutes later, allowing Tyger Evans to race forward and spark a Penn State counterattack. He slowed before finding Peter Mangione in the middle of the field, who took a touch before launching a shot with his right foot.

The curling strike nestled into the top right corner, giving the Nittany Lions the lead just 11 minutes after the Terps claimed it for themselves.

Penn State took its 2-1 lead into half time despite being outshot 9-4 by Maryland, but the Terps reestablished the deadlock six minutes into the second half.

Griffin Dillon shoveled a first-time finish into the roof of the net for the equalizer. His chance came off a shot from Luca Costabile that Shakes couldn’t parry away from danger.

“We just played at a much higher speed, technically, physically, tactically, and that’s what we needed to do,” Cirovski said. “That urgency that we played with at the beginning of the second half is what we have to play [with] from the first whistle.”

Maryland and Penn State traded penalty kicks as the game wound down to make the score 3-3, and a tense crowd cheered and nervously watched on in the final minutes as both sides attempted to find a winner.

However, neither side could find the back of the net as a high-scoring contest fizzled out in the final 15 minutes. Despite outshooting the Nittany Lions 19-8, the Terps continued a winless streak that hasn’t been broken since 2018.

“I’m not taking anything away from Penn State because they certainly earned their goals, they took them well,” Cirovski said. “But for the amount of opportunities we had, we should have won this game.”