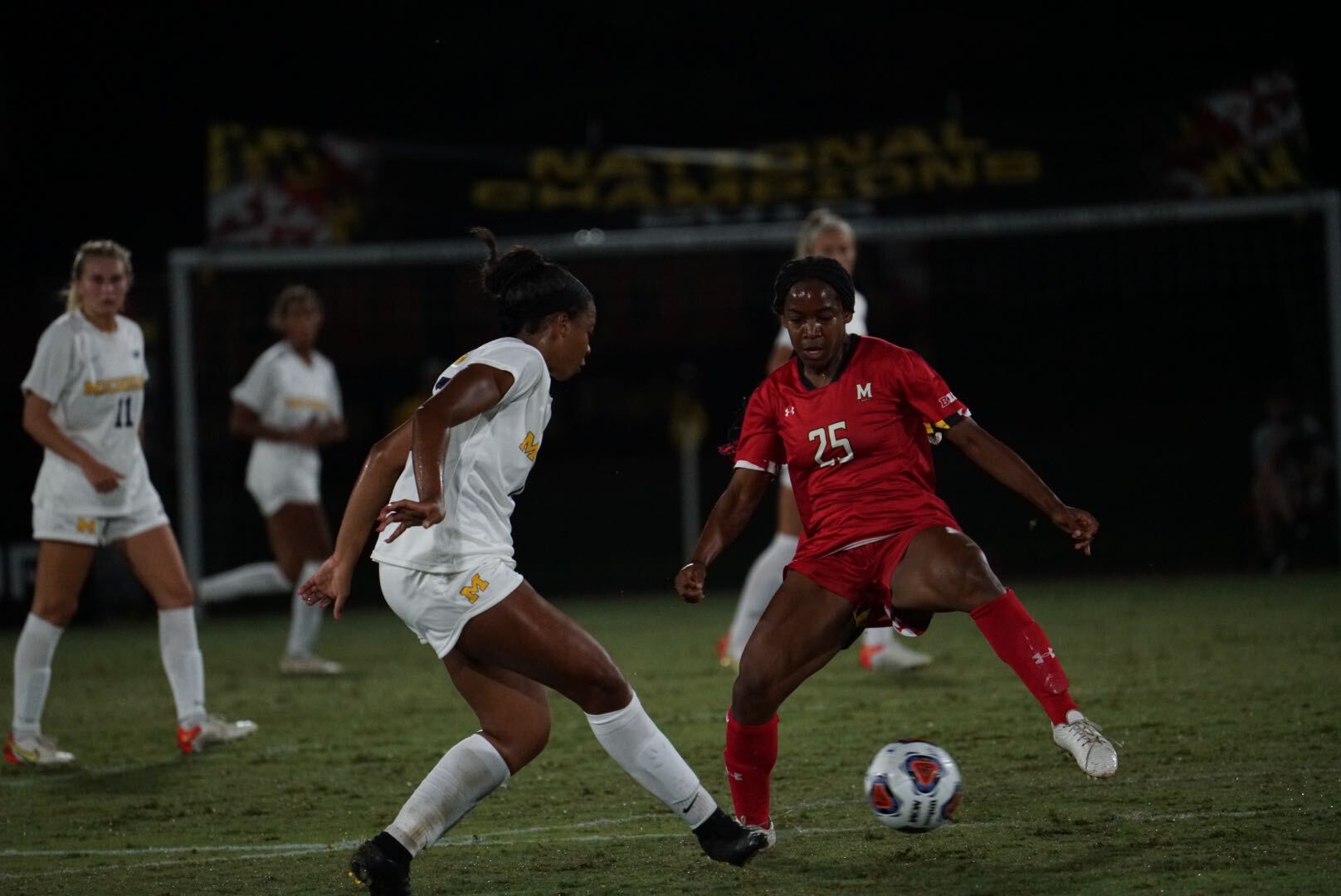 Maryland women’s soccer controlled play in Michigan’s half, passing the ball around the Michigan squad before the ball found the feet of Juliana Lynch on the wing.

Lynch picked up her head with space in front of her before finding Mikayla Dayes in the middle of the box. Dayes out-leaped her defender before redirecting a looping header back across goal and into the back of the net.

Dayes’ score was the lone goal in a 1-0 Maryland win over Michigan to kick off Big Ten play. The win marked the first Big Ten win for the Terps in over two seasons and Maryland’s first win against the Wolverines in program history.

“I’m just happy,” Mikayla Dayes said on scoring her first goal of the season. “It means a lot to me, our team has grown so much.”

Maryland played a ball in behind the Wolverine backline straight from kickoff. Mikayla Dayes kept the ball inbound from the wing, drilling the ball across the field. Michigan defenders failed to get enough contact on the ball to clear their lines, and it fell to Catherine DeRosa who laced a shot that was saved by the Wolverines’ goalkeeper.

Michigan created chances of its own, ending the half with four efforts toward the goal. Each shot the Wolverines let fly in the half was saved by Madeline Smith.

The Terps needed another strong defensive performance against the Wolverines. Michigan entered the game ranked ninth in the nation in scoring offense with an average of 3.25 goals per match. The Wolverines were sixth in total goals scored in the nation and coming off a 7-2 thrashing of Toledo.

“We spend so much time on defense,” Mia Isaac said. “That’s one of [Nemzer’s] biggest things … [She’s] a great defensive coach and she allows us to play offensively by how we defend.”

By the end of the first period of play, Maryland had racked up three shots on goal, with just one on target. Still, the Terps found linkup play in midfield and the final third in the first period. The Terps had more than half their possession in Michigan’s half of the field.

The second period of play kicked off with the same intensity, with both teams matching each other blow for blow. Michigan opened up the first ten minutes of the period with two shots both off target. Maryland followed with three shots of its own, forcing a save from the Wolverines’ goalkeeper.

Maryland finally found its groove in the box. With just over 20 minutes to go, Juliana Lynch whipped a ball that found the head of Mikayla Dayes, who beat her defender and redirected the cross back across goal and out of the Wolverines goalkeeper’s reach for the lead.

Goalkeeper Madeline Smith rushed to Michigan’s half to join in the celebration.

The Terps were in the driver’s seat. After ending the first period with fewer chances than the Wolverines, Maryland outshot Michigan by one tally after the goal.

“I give once again, all credit to the players because I challenged them this week on the details and habits in the final third,” Nemzer said. “At moments it wasn’t perfect but they stayed with it.”

Nemzer’s squad held on as time expired. As soon as the final whistle blew, the entire bench cleared out and huddled in celebration with the rest of the players, meeting in their half jumping and exclaiming as the Terps snapped their long conference losing skid against the Wolverines.