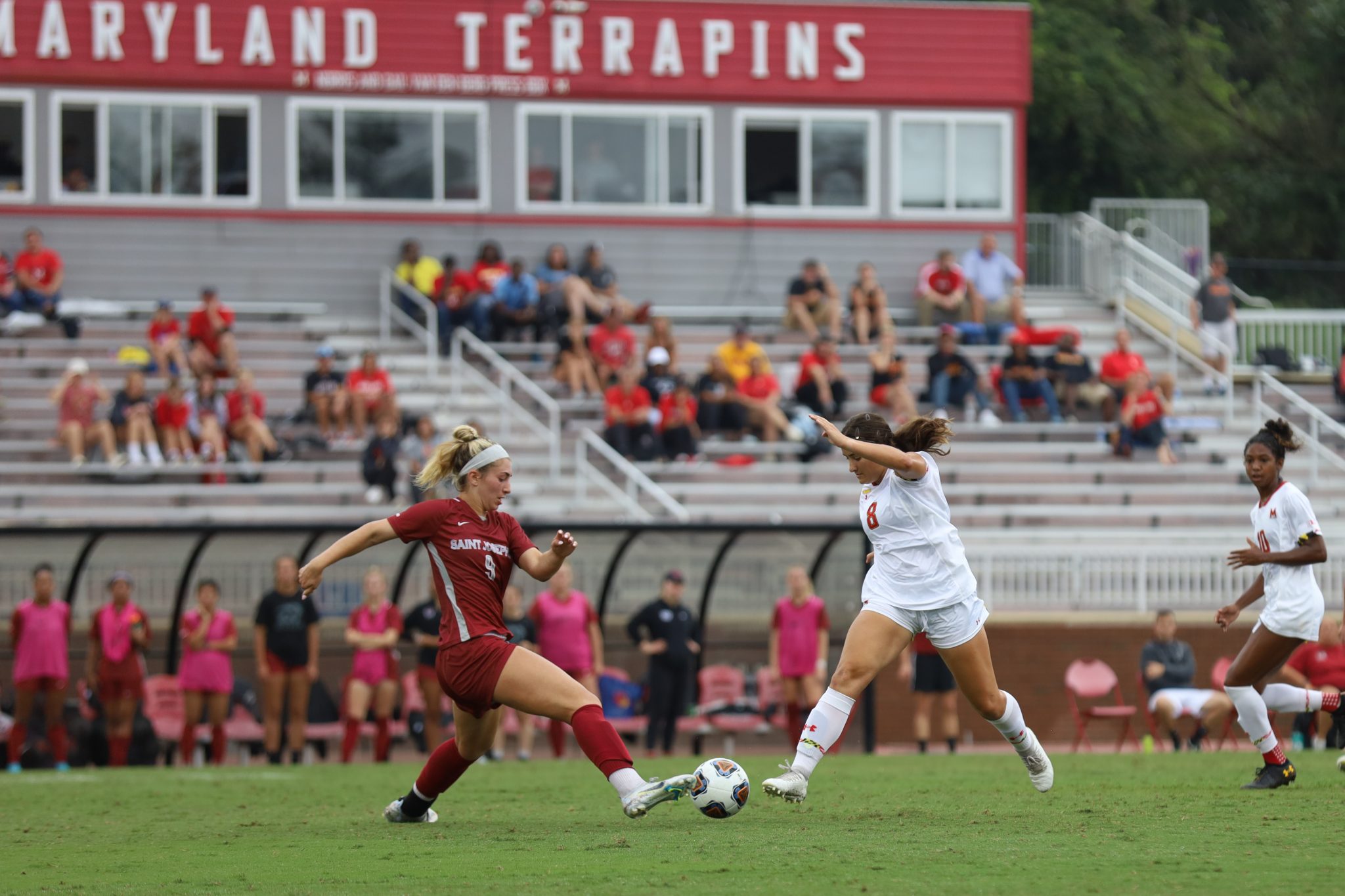 Alyssa Poarch commanded the ball, receiving it on the right side of the box and cutting back on her left foot.

She unleashed a curling attempt aimed toward the top left corner of the net in the 18th minute. The attempt made it beyond Saint Joseph’s goalkeeper Katie Cappelletti, but ricocheted off the crossbar.

The attempt sums up Maryland’s day. The Terps earned their fifth draw of the year after a 0-0 result despite dominating the Hawks — outshooting them by nine.

“We spoke about taking more opportunities and I think that we did that, but now it’s just decision making,” Nemzer said. “We created enough to win the game, but we’ll have to go back and clean things up a little bit.”

Sunday’s match marked just the second meeting ever between the two teams.

The Terps aimed to rebound from Thursday’s 1-0 defeat to Wake Forest. They lined up similarly to their midweek fixture with Schafer at defense again. This time however, they started graduate goalkeeper Emory Wegener instead of Madeline Smith.

The Maryland keeper ended up not needing to make a single save in ninety minutes of play.

The Terps racked up five shots in the first 18 minutes of the game, two of which forced the Hawks’ goalkeeper Katie Cappelletti to make saves.

One of those attempts came on Poarch’s attempt that deflected off the crossbar. She led the Terps with four shots, one of which came on target.

The Terps peppered a leaky Saint Joseph’s defense with shots. The Hawks’ defense has conceded 17 goals in its seven games so far this year.

Following a corner in the 35th minute, Maryland found itself with an awkward bouncing ball that nearly crossed the goal line until Christa Waterman booted the ball away from danger. The corner marked just one of two for the Hawks in the first half.

The Terps entered the second half with both teams still scoreless. Poarch created a chance for Kam Fisher to grab the lead, sending a cross into the box, but Fisher couldn’t redirect the ball towards the frame of the goal.

The defense quieted Saint Joseph’s, limiting them to just three shots and none on target.

“It starts with our forward line and everyone being compact, and then from the forward line it falls into our midfield and our defense,” Schafer said on the defensive performance.

In contrast, the Terps recorded 12 shots and four shots on target. Maryland also drew nine fouls in the game while only committing four of their own.

The Terps will have their conference opener against Michigan at Ludwig Field on Friday. The Wolverines are undefeated in their three away games this season, winning all three by a combined scoreline of 14-2.

Maryland hasn’t won a Big Ten game since a 1-0 result against Michigan State in 2019.