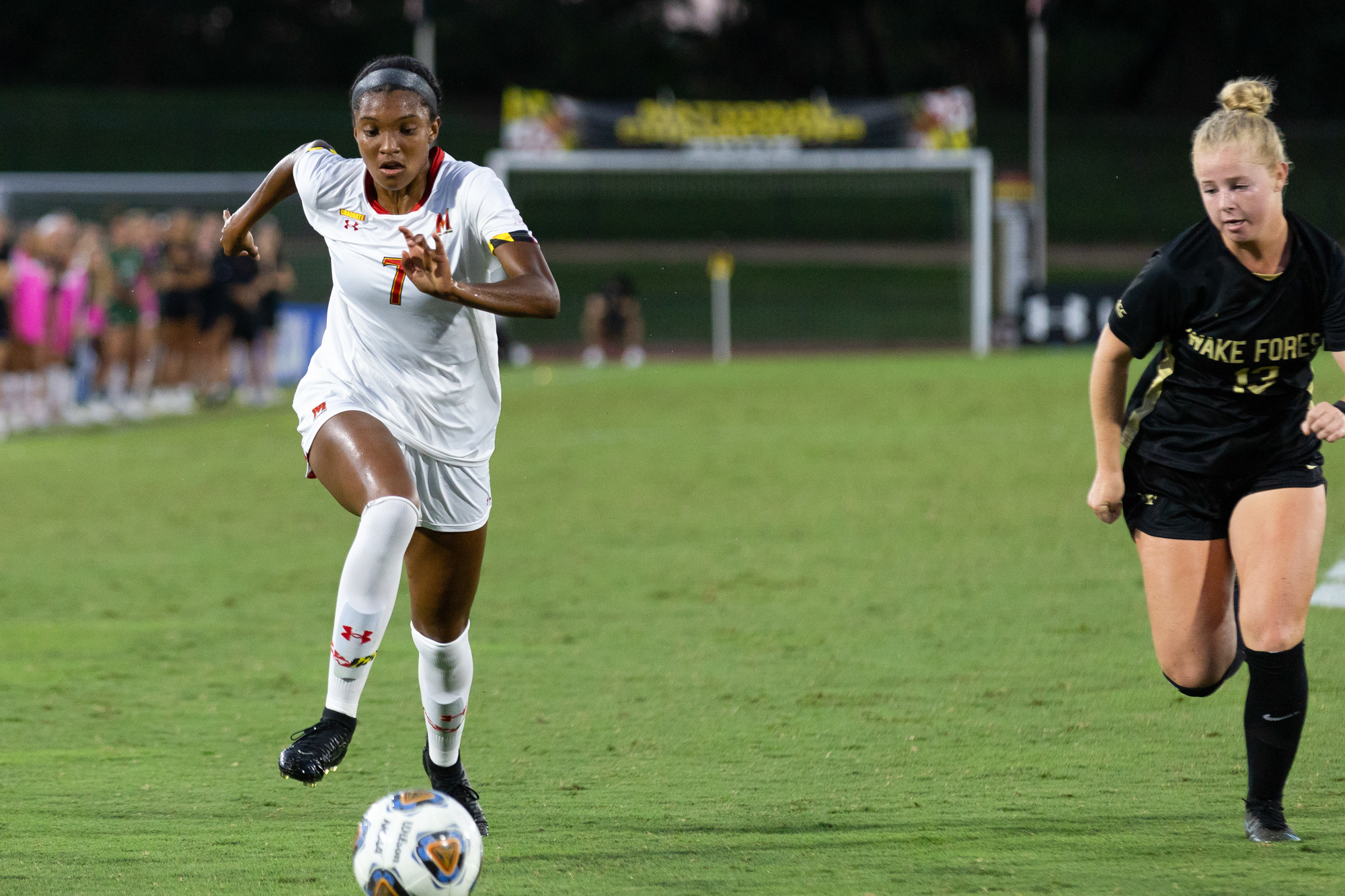 Maryland women’s soccer’s offense stalled against No. 24 Wake Forest. For the first time this season, the Terps were shut out.

The Demon Deacons made it difficult for Maryland to break through with a goal. Wake Forest matched its season-long track record as a defensively sound squad that’s only allowed one goal all season.

In its next game, Maryland went another 90 minutes without scoring a goal — this time against unranked Saint Joseph’s. The Hawks are a mere 1-5-2 and have conceded an average of 2.1 goals per game in the eight games they’ve played this season.

“Now it’s just decision making. Instead of maybe taking that 20-yard shot, can we now find that extra pass in the box?” Nemzer asked.

The Terps outshot the Hawks by nine and notched four shots on target, with nine corners in the process.

But of the 12 shots the Terps took, five of them came from outside the box. Each of the Terps’ shots taken from outside of the box came during the second half of the match.

Maryland had less than two minutes to go to salvage a win against the Hawks. Saint Joseph’s defended with all 11 of their players in their half of the field.

Alyssa Poarch picked up the ball and found Olivia Hicks wide on the right side. Moments later, the ball found itself at the feet of Poarch again. Poarch unleashed a strike from her left foot near the edge of the box, but the effort fell wide.

“Credit to Saint [Joseph’s], they had eight or nine behind the box or in the box at times, and we needed to be smarter of the ball movement,” Nemzer said.

Just one of the opportunities created from outside of the box forced any action from the Hawks’ goalkeeper; however, the shot was dealt with ease.

This isn’t the first time the Terps have outshot their opponents by a significant margin without breaking the scoring deadlock this season. Maryland felt the same problems against Temple, Navy and Penn.

Against the Owls, the Terps registered 16 shots total with eight on target. Against Navy, Maryland outshot the Midshipmen by seven. Nemzer’s squad outchanced Penn, outshooting the Quakers by three and registering two more shots on target.

The Terps’ Big Ten opener against Michigan marks an opportunity for Maryland to rewrite the program’s woes across the last two seasons, a span in which the Terps haven’t won a conference game. Their last win, a 1-0 victory over Michigan State, happened Oct. 24, 2019.

“This starts season two for us now. Everyone has the same record going into … Big Ten,” Nemzer said. Maryland has an opportunity to find its offensive spark in Friday’s matchup with Michigan. The Wolverines defense has conceded 10 goals in just eight games so far this season. To break the streak, Nemzer’s squad is focused on improving the quality of its offensive looks.