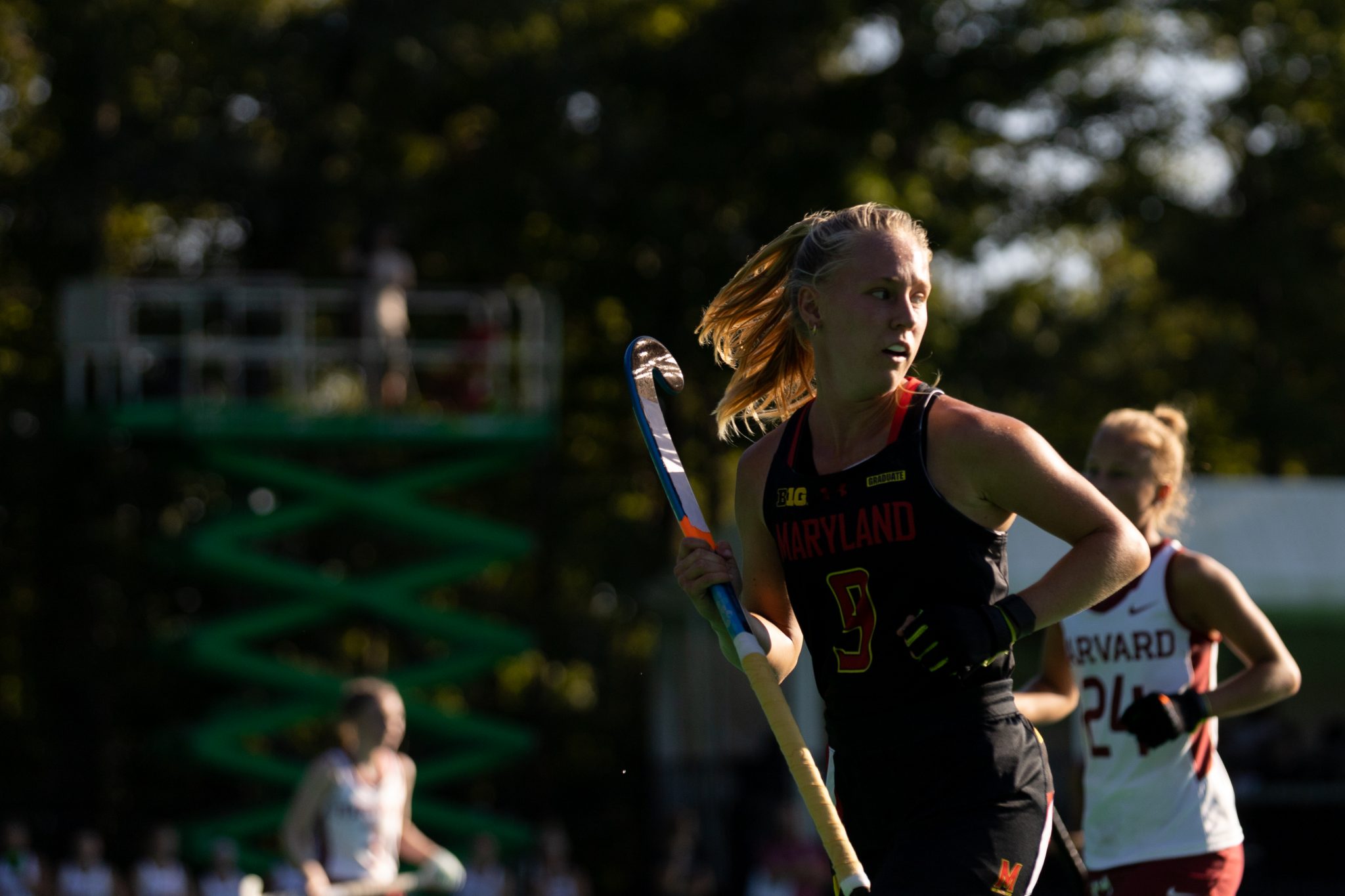 Every time it looked as though Maryland field hockey made progress toward taking a lead, Ohio State was there with an answer.

Two Terps penalty corners in the game’s opening minutes were stopped. After successfully moving the ball to begin the game, the Buckeyes played a press that was tough to break. Ohio State goalie Abby Danson logged six first-half saves, leaving Maryland with one goal to show for five penalty corners and seven shots on goal.

Even when the Terps did put the ball in the net, the Buckeyes did the same less than a minute later. Ohio State increased its lead, scoring on a penalty corner in the third quarter, representing the first time Maryland has trailed in a second half this season.

Carrying a deficit into the fourth quarter for the first time in 2022, the Terps overturned the Buckeyes’ lead in the final 15 minutes. Hope Rose took advantage of a penalty stroke opportunity to tie the game at two, and Leah Crouse scored on an open net minutes later.

After a frustrating opening three quarters, a quick turnaround early in the fourth propelled No. 3 Maryland to a comeback victory over No. 23 Ohio State, winning 4-2 to remain undefeated.

“We practice this a lot,” coach Missy Meharg said. “We’ve got every situation that we’ve put into play, we’ve simulated it, so I don’t think they’re surprised by it. They just have to have the vigilance and the depth and the service to each other to give each other goals.”

[Maryland field hockey has two capable goalies at its disposal]

Meharg knew Big Ten opponents would give her tougher battles than nonconference opponents do. After eight seasons in the conference, she anticipated a new level of energy that some of her new players haven’t seen before.

“Big Ten hockey comes with its own kind of energy,” the coach said Wednesday.

Two early penalty corners gave the Terps opportunities to strike first, but both were successfully defended. Later, a one-on-one Sophie Klautz strike was kicked away by Danson to keep the scoreless tie.

From there, Ohio State deployed a different press defense. This one gave Maryland trouble. The Terps suddenly had a tough time advancing the ball through the midfield, turning the ball over on long pass attempts.

Maryland’s offense eventually found a way through the press. Danielle van Rootselaar scored her fourth goal of the season on the Terps’ third penalty corner of the afternoon. As it did all game long, Ohio State responded soon after with a score of its own to recapture a tie.

Even as Ohio State went down a player for most of the second quarter after a yellow card, the Maryland offense still couldn’t move the ball to the shooting circle with efficiency.

“It really was the goaltending, and we weren’t taking really good shots,” Meharg said. “We always say, ‘pass to nobody on the far side and you’ll probably have an open goal.’”

Meharg’s been sharp all season long when making mid-game adjustments after slow starts, usually leading the offense to a scoring outburst that results in a victory.

That adjustment looked like it may have been absent Friday. Maryland took seven shots on goal in the first half and followed that up with only one accurate attempt in the third quarter.

Then, entering the final quarter, Meharg switched up her defense. It resulted in more Ohio State turnovers that led to more Maryland offensive chances.

“We initially were playing a bucket and having them come into the center of the field,” she said. “Then we played this point defense and it put all the pressure on their side backs, which I think really changed it up for them.”

The first few minutes of the fourth quarter erased the Terps’ initial struggles. Maryland turned 17 shots into one goal through 45 minutes, then scored three times on three attempts in the final minutes.

Rose, handling Maryland’s first penalty stroke attempt, slapped it by Danson for the tying score. Van Rootselaar found Crouse open on the right side to score in front of an unattended net for the game-winner.

Van Rootselaar scored her second goal of the game after the Buckeyes pulled their goalkeeper to make it 4-2, securing the victory for the Terps.

“We work really hard on being present,” Meharg said. “You have to practice that and today was a great opportunity. Every game in the Big Ten is going to be like this. It’s Big Ten hockey.”