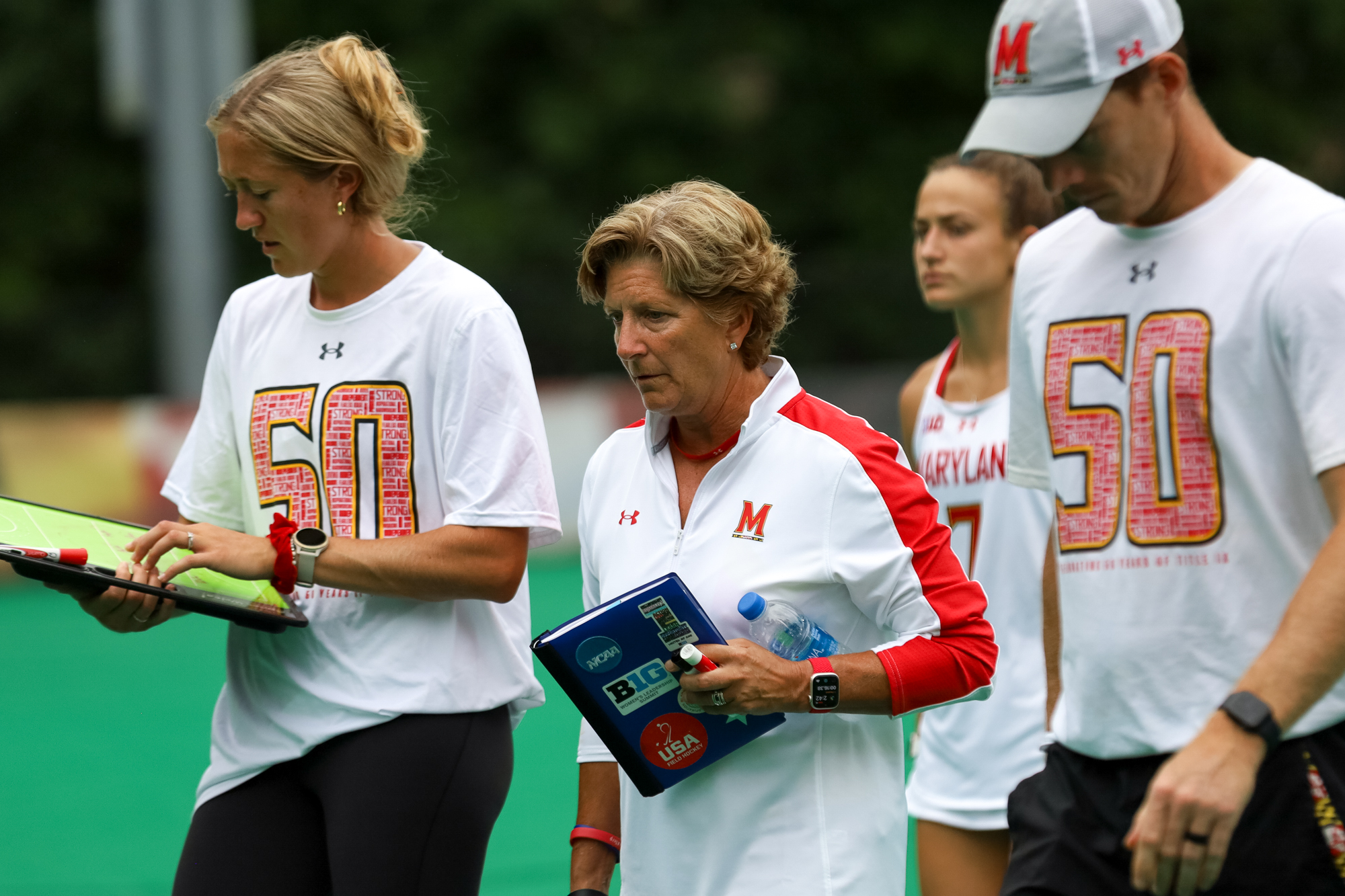 Maryland field hockey entered halftime in a bout with unranked New Hampshire tied 1-1. The Terps frequently broke through the Wildcats defense and racked up shot attempts, but only one of the 13 first-half shots found the back of the net.

Coach Missy Meharg reached deep into her wealth of knowledge accrued over 35 years as Maryland field hockey’s coach to find a solution to the scoring struggles. Instead of an offensive strategy, she turned to a rare style of defense that gives opponents fits when implemented.

Instead of putting focused pressure on the ball, Meharg put her defense’s emphasis on the outside. Doing so put more stress on the Wildcats’ boundary attackers while allowing their center back to move the ball where she pleased — baiting her into mistakes.

The adjustment led to several interceptions that translated to instant offense. Although it attempted fewer shots in the second half, Maryland put the ball in the net five times and attempted seven penalty corners after the defensive change forced several turnovers and propelled the Terps to a 6-1 win.

“We played against their backfield completely differently,” Meharg said. “That’s going to be very hard for some teams, but it’s not something you open with … it’s something you can go to, and I thought that brought us a lot of intercepts.”

Mid-game adjustments have been a staple for Meharg’s team, which has started a handful of games quietly in its 6-0 start to the season.

Maryland entered halftime tied in its previous two games. The Terps trailed Duke and were tied with Boston College for most of both first halves at the Big Ten/ACC Cup. Maryland and Drexel entered the second quarter tied in the Terps’ season opener.

Meharg identified slow starts before the year as an aspect her teams have struggled with historically and something that they’d focus on refining. That area of Maryland’s game has not yet improved. Only three of the Terps’ 26 goals this season have come in the first quarter.

Maryland’s shortcomings early in games have heightened the importance of Meharg’s adjustments. Her changes have dragged the Terps out of their slow starts and pushed them to big wins in several instances.

The New Hampshire game started eerily similarly to Maryland’s battle with Stanford in the Terps’ second game of the season. Meharg’s squad spent a large portion of that contest controlling possession inside the Cardinal circle but logged just one goal on 23 shots.

“It’s exactly what we talked about at halftime,” Meharg said after the New Hampshire win. “It feels like Stanford. … It was very much of a deja vu situation.”

To prevent the New Hampshire game from unfolding similarly to Stanford, Meharg altered where her squad focused its defensive attention.

The Terps’ quiet starts arose early this season. Maryland and Drexel were knotted at zero after the opening quarter of the season despite facing a Dragons team that went 6-14 and finished in the bottom half of the 2021 Colonial Athletic Conference standings.

Like it did against New Hampshire, a defensive adjustment aided offense. Meharg shifted the defensive press after the first quarter to put more pressure on the ball and in turn limited passing and shooting opportunities.

Maryland scored three goals in the second and third quarters to pull away and win, 7-1, as the pestering defense allowed for Terps’ counterattacks.

“We really changed our press and the shape of the press,” Meharg said. “We put a player right in front of the girl with the ball. … That kind of changed the momentum … I was pleased that we were able to at least take the game in our hands and get goals by making the change.”

The Crimson scored first midway through the second quarter. The goal marked Maryland’s second straight game where the opposition scored first after not trailing at any point in its first three games.

The Terps dug themselves out of the early hole on a Leah Crouse score, but still entered halftime in a tie with little success on offense to build off of. Another adjustment was needed, and Meharg again made the right move.

She picked out Danielle van Rootselaar as the key to unlocking a sluggish attack because of her ability to play multiple positions despite settling in the midfield. Meharg anticipated that moving van Rootselaar around would open up the rest of the offense to pass and shoot more freely.

After moving van Rootselaar away from the middle of the field and to the sideline, Maryland outshot Harvard seven to zero in the second half en route to a narrow 2-1 win over the highest ranked team the Terps have played this season.

“It was a matter of freeing her up,” Meharg said. “We moved her out of the midfield, let her get into a flank position. Third and fourth quarter, I thought she was just dynamite helping us out with securing the right sideline and building the end zone.”

Despite being ranked in the top three amid an undefeated season, Meharg and the team have been forced to make some adjustments to overcome poor starts in nearly every game this year. Their perfect record shows the effectiveness of those moves.

As a result, the Terps enter conference play unbeaten. As the level of competition rises, Meharg’s mid-game changes, movements and shifts will become even more crucial in continuing Maryland’s best start to a season since 2018.

“We’re right where we want to be, but we know what’s next,” Meharg said. “It’s time to start Big Ten hockey, and that comes with a whole nother level of emotion.”