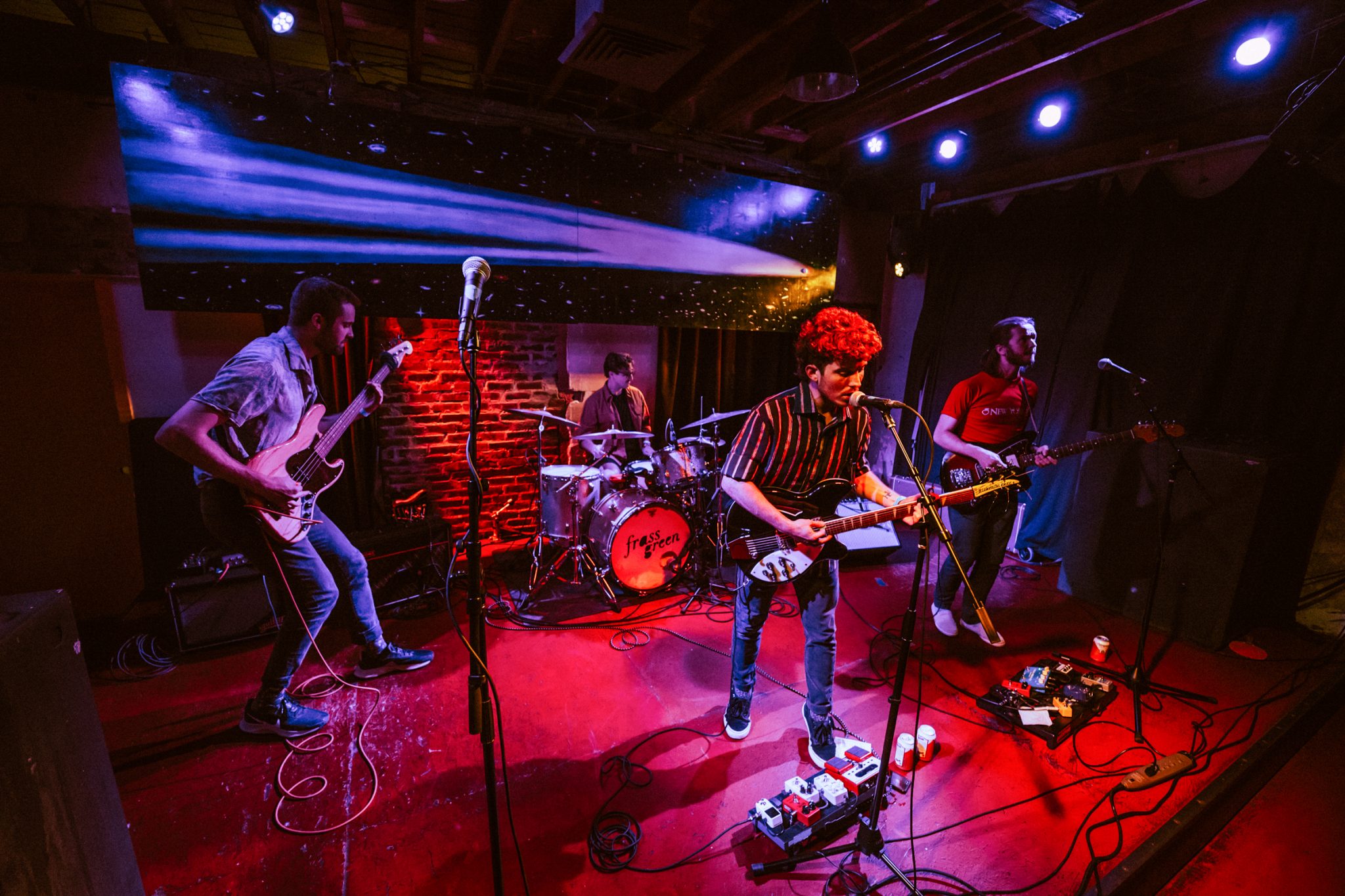 It was just a joke when members of Frass Green used to say the band was going to break up more than two years ago — but that joke almost became reality when the COVID-19 pandemic hit in 2020.

For Joe Antoshak, the band’s rhythm guitarist and singer and a former writer for The Diamondback, nothing seemed certain as people considered leaving Washington, D.C., and anyone could have been laid off at any point. He was especially worried about the other three Frass Green members, who had become his closest friends over the years.

“For a while there, it really wasn’t possible to figure out what life was going to look like in a year,” Antoshak said. “It felt like nothing was going to be the same.”

But the band’s still here, together and gearing up for a performance Friday night at DC9 Nightclub alongside local bands Scorpio and Canandaigua. The concert will be a celebration of Buried, the band’s new 11-song album coming out the same day.

While Frass Green released its EP Death of Pop in May 2020, bassist and keyboard player Tyler Rippel said the band couldn’t meet up for about six months after the pandemic began. They eventually met up later that year as winter approached, and they had something Rippel said was the most important factor in making Buried possible: an outdoor practice space.

The band began to meet every week on Tuesdays to practice new songs. Drummer Antonio Peluso said he remembers having to bring his drums to the backyard of the house he’d eventually live in and having to deal with the rats and bugs that were there. People who were walking along the street would sometimes approach them to share a drink or perch themselves on the rickety fence to listen. The band remained consistent with this schedule, only breaking it if the temperature reached below 40 degrees.

“I thought my fingers were gonna break off,” Antoshak said.

“That was brutal,” Rippel added. “But I know I looked forward to Tuesdays more than I ever have by a longshot.”

Later, the band members decided to stay in a cabin to continue writing and fleshing out the album. Living in the cabin was also intense because the water there contained metal, and it was hard to stay hydrated, Antoshak said. At one point, he said he passed out.

Antoshak mentioned the band created some of the album’s songs in the cabin and during production, he tried to make the album sound like it did while he was there.

Frass Green’s music genre varies. Antoshak said early on, the band called its genre “nasal pop,” but nowadays they usually go with “garage rock.” But two elements he said are consistent in the band’s music are the guitar and the occasionally distorted and fuzzy vocals.

When it comes to Buried, Antoshak described the first half of the album as very angsty and a bit depressed, while the latter half is a bit more hopeful. Many of the songs seem to be inspired by hardships caused by the pandemic and the political climate of 2020.

For example, the song “35 Years,” c0-written by Antoshak and Rippel, was originally meant to be called “45 Years.” However, the name was changed to avoid any unintended connection with the 45th president.

The song begins with lyrics about leaving the capital. Antoshak said that sentiment made a lot of sense to him because during the pandemic, he found himself questioning why he was still living in Washington, D.C.

Antoshak said he wrote the last song of the album, “Abigail,” as a song to his wife’s niece, thinking about what the world will be like for someone who was just born into it. And in another song titled “Mural Mosaic,” the lyrics saying, “the street’s on fire,” are meant to be an obvious reference to what was happening in 2020.

“That was written right around the time the George Floyd protests were going on, and it really felt like the National Guard was just going to start shooting people in the streets,” Antoshak said.

Peluso, who said he isn’t as focused on the lyrics compared to his bandmates, said he sees the album as something hopeful. Being isolated had caused him to forget whole months of his life, and making the album allowed Peluso to finally see other people and think about a future of playing shows again.

“It signified the end of a really difficult time in all our lives,” Peluso said. “The cabin was such a formative time for all of us.”

The band members are excited about the DC9 performance. For Antoshak, having an upcoming release show for an album comes with a strange feeling since the album has been a long time coming. Now, all that excitement will be concentrated into a single day.

“It’s honestly a little hard to wrap my head around,” he said. “It’s like all this time that we’ve put into it, and then it’s just out in the world.”

“It’s something we’ve all been looking forward to for quite some time,” Peluso said.

Rippel will be the only member of the band not there. He’s traveling in Europe, and another bassist will take his place on stage. His one message to everyone who will be at DC9 is that he begs for their forgiveness.

“I will bleed out of any place on my body to show you how much I love this band,” Rippel said.

Looking back on the journey to creating Buried and the preparation for this upcoming show, Antoshak is glad the band didn’t break up as they had worried two years ago.

“The band staying together wound up being like a portal back into the previous world,” he said. “We’re still a band. We’re still best friends. We’re different now. Things just changed, and that’s okay.”

CORRECTION: A previous version of this story misstated that the song “35 Years” was originally named “45 Years” in reference to the 45th president. The song name was changed so there wouldn’t be any unintended connection to the president. Additionally, the story mistakenly attributed the song’s writing to only Tyler Rippel. It was co-written by Rippel and Joe Antoshak. This story has been updated.