Smithsonian exhibit examines the future of Title IX in sports 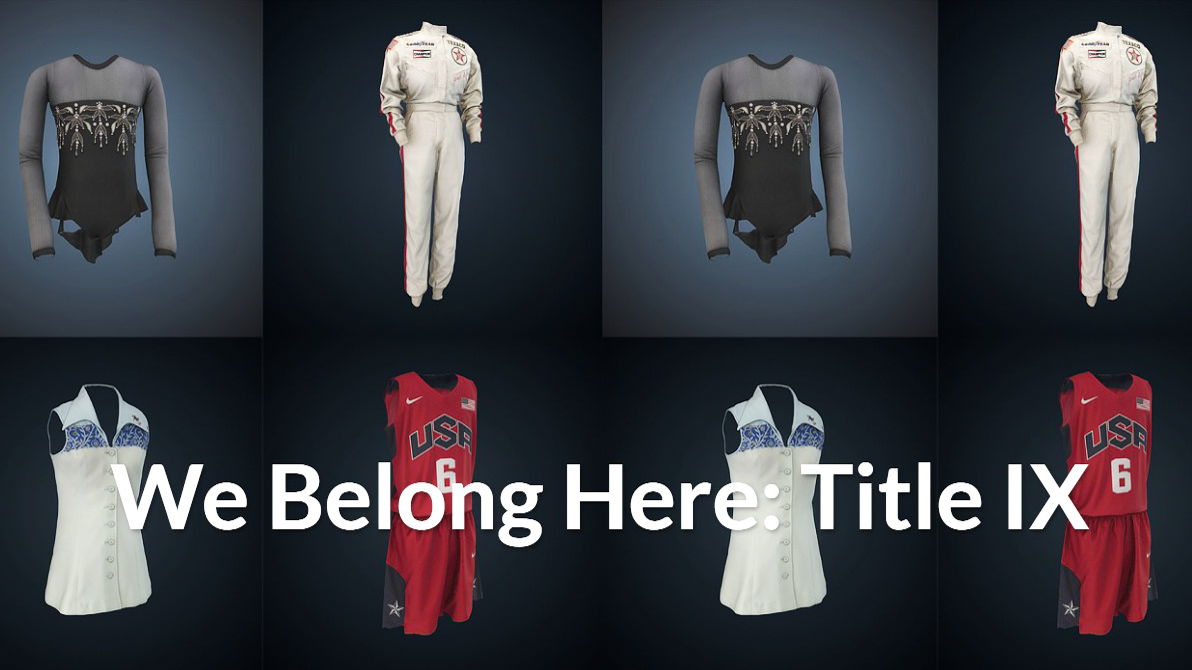 In the early 1920s, most women and girls were cast aside in sports arenas. Some states even outlawed girls’ play in sports over the belief that they couldn’t handle the physicality or stress of competitive sports. Even 50 years later, some bans were not officially overturned until Title IX — a federal law that unintentionally transformed sports forever.

The Smithsonian National Museum of American History in Washington, D.C., marks the 50th anniversary of Title IX in an exhibition titled “We Belong Here.” Open until winter 2023, the immersive graphic display highlights athletes and their battles for representation, equal pay and increased mental health support in sports.

The struggle for equal opportunity in women’s sports began long before Title IX became law in 1972. At the time of its passage, one in 27 girls played sports in the U.S. By 2016, they represented one in every five girls. This year, the number rose to 3.4 million women in sports nationwide, but opportunities are still out of reach as transgender, nonbinary and cisgender women athletes demand equality.

A larger-than-life cut-out of skateboarder Leo Baker, a transgender and nonbinary athlete, performing a flip hangs in the 30-foot glass display next to a white T-shirt that reads “They/Them.” Baker made the shirt in 2019 to publicly express their identity after making the inaugural U.S. Olympic Skateboarding team. Baker, who wanted to remain true to their masculine-presenting identity, refused to compete for the women’s team.

Although Title IX was not intended to transform sports, the exhibit spotlights each athlete’s struggle and emphasizes what still needs to change as Title IX evolves, according to Jane Rogers, an associate curator in the museum’s cultural and community life division, in a news release.

As sports responds to ideas about gender, Baker wants a space carved out for queer and gender non-conforming people like them.

“I think the future of skateboarding is inclusive,” they said in a video included in the online exhibition. “Skateboarding is insular, and it’s all these cis, straight dudes in this space and they’re not exposed to queer people or women … For us to break down those walls, even just a little bit, I think is going to make a huge impact.”

The exhibit also zeros in on struggles professional athletes face, such as pay and psychological and physical health.

Naomi Osaka’s 2020 U.S. Open Tennis Championship racket hangs alongside 2020 U.S. Soccer Player of the Year Samantha Mewis’ 2019 U.S. National Soccer team jersey. Osaka, an advocate for mental health reform in sports, is quoted in the display, underscoring the need to reduce the psychological pressure placed on athletes surrounding work obligations such as press conferences. A sketch of a young woman holding a sign in the background of the display says, “It’s O.K. not to be O.K.,” a quote from Osaka’s 2021 Time op-ed about prioritizing mental health.

A similar drawing positioned behind Mewis’ jersey shows a young woman holding a sign that says, “Equal Play, Equal Pay!” in support of Mewis and the 27 other players who won a lawsuit against the U.S. Soccer Federation for gender discrimination. The suit noted how despite performing the same job and winning four Olympic gold medals, female players were paid less than lower-performing male players.

Columns in front of the display case also highlight how Title IX is about more than just sports — it also includes players’ safety. With hundreds of Title IX cases currently under investigation at schools across the country, the exhibit calls attention to the ongoing sexual abuse, harassment and retaliation taking place within women’s sports.

But just as Title IX is evolving, support for female-identifying athletes is changing, too.

Bumble, a dating app where women make the first move to protect them from unwanted attention, is helping female athletes move closer to equal pay in college sports.

In June, Bumble began a yearlong sponsorship of 50 women in college sports around the country. The name, image and likeness sponsorships — which pay equal amounts to each athlete — involve social media support, events and appearances, and media opportunities for a year, allowing the student athletes to profit off of their influence, according to Axios Austin.

This innovative representation of overlooked women in sports gives new means of recognition. However, as the fight for fair play ventures into talks about gender identity in sports, Title IX stands to be just as important as it was five decades ago.