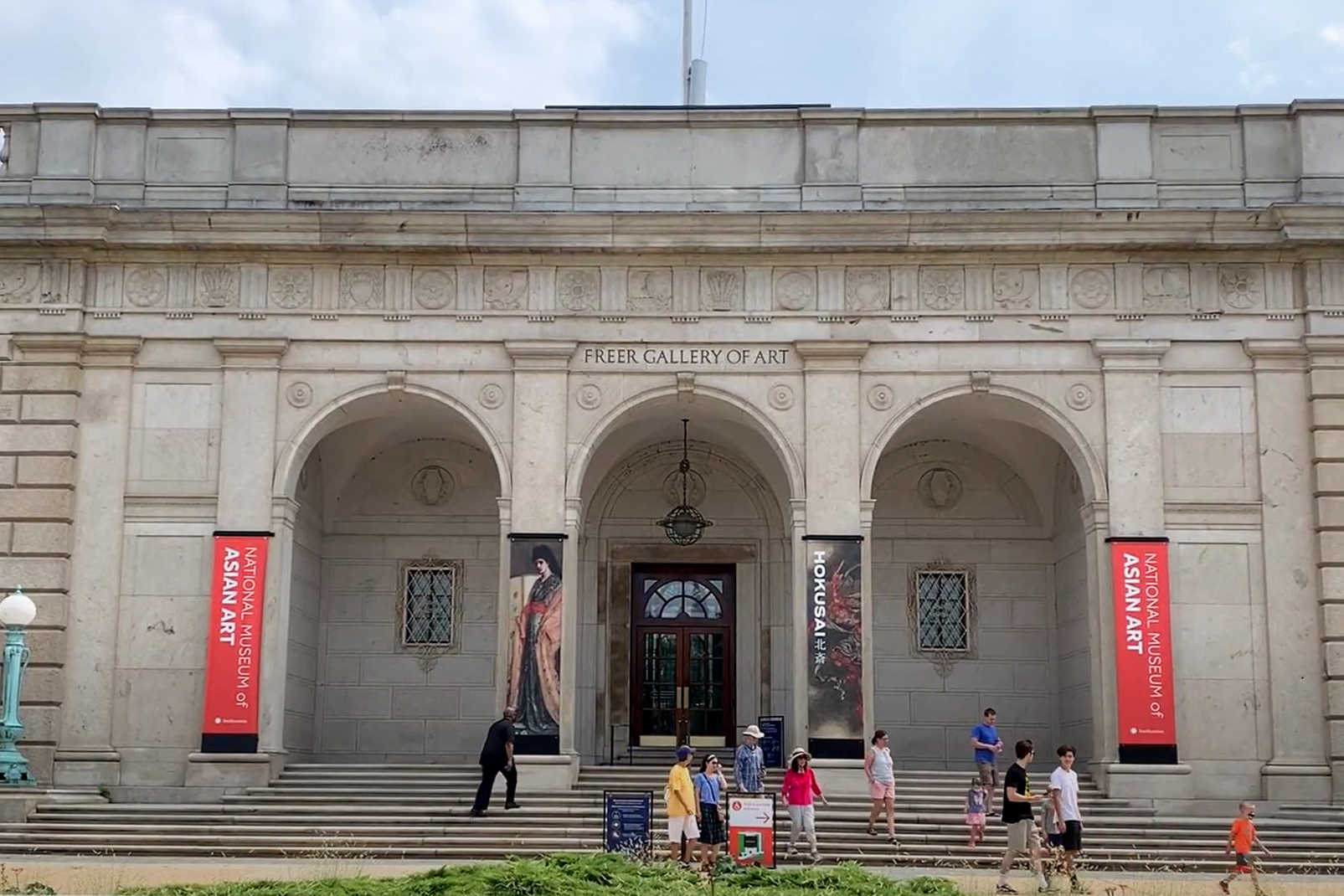 A motorcycle engulfed in flames lies abandoned on a busy street in Iran. Black smoke rises from the blistering flames as civilians march down the street with their backs turned to the blaze. The crackling of the torched motorbike almost permeates the monochrome photograph taken more than four decades ago.

The crisp image, entitled “Enghelab Street,” is among a collection of unparalleled documentary works from artist Bahman Jalali and his wife Rana Javadi. In the temporary exhibition “Living in Two Times” housed at the National Museum of Asian Art, haunting images and photo montages from both artists capture events in Tehran, Iran, during the 1979 Iranian Revolution and reflect on the lives and landscapes that dramatically changed during the Iran-Iraq War.

In the photo series “Days of Blood, Days of Fire,” Jalali and Javadi capture a turbulent period of protests and violence in Iran under the country’s repressive and authoritarian government. Strikes and public demonstrations swept millions of Iranians into the streets as they demanded the shah’s removal. Joining the crowds in and around the city’s main streets, Jalali and Javadi immortalized moments of chanting and destruction with intervals of quiet anguish and reflection.

In a whirlwind of unified chaos, Iranians stacked themselves onto the skeleton of a large, unfinished building. In the streets, soldiers joined the people. With a semi-automatic rifle pointed toward the sky, one soldier is lifted onto another man’s shoulders and chants with the crowd.

Between visuals of smoke-filled skies and army tank-occupied streets, the mental and emotional toll of monthslong mayhem set in. In “Pasdaran Street,” one man’s disbelief steers his attention away from the rifle resting behind him and toward the foot traffic of fellow protestors.

In late 20th century Iran, the flourishing field of photography restricted warfront coverage to men. This left Javadi, who collaborated closely with her husband, with limited chances to be behind the camera. Nevertheless, in early 1979, Javadi deployed herself to the streets to capture the atmosphere of a country in transition.

In one of Javadi’s photographs, people are stopped in their tracks, reading papers from a ransacked police station.  Documents cover the pavement and hang across tree branches like confetti. In another image, throngs of supporters reach toward Ruhollah Khomeini, the acclaimed leader of the Iranian Revolution, in a desperate attempt to touch any sign of hope for a better future.

Meanwhile, Jalali turned his lens to the shocking scenes of normalized destruction. A splatter of dark paint or blood stained the floor in one photograph with eyes avoiding the evocative visual. Another photograph shows a young boy standing on a ledge at the back of an ambulance. The boy appears to be hiding from the demonstration taking place just on the other side of the vehicle.

Despite the hopes of revolters, the shah’s removal did not bring an end to the unrest. Political upheaval in Iran reignited long-standing tensions with Iraq, commencing a territorial war that claimed millions of lives before a stalemate in 1988.

Jalali worked independently to record the physical and psychological destruction of two cities — Abadan and Khorramshahr — as both sides fought for control. Buildings and neighborhoods were left marred and desolate as structural ruins emphasized the magnitude of loss in landscapes filled with emptiness and debris.

In another image, a car with no windows and a detached front bumper lies vertically wedged in a pile of dirt and rubble. Bullet holes cascade the side of a building. A hole in the ceiling of a hospital room gives way for the sun to shine down on a broken bed frame covered in fallen insulation. Packed suitcases are left among the ruins of a crumbling brick house.

The structures left behind mark the damage of a past better abandoned than rescued. Yet the images of people evoke an inescapable understanding of the future and all who were lost to the wreckage.

In one image, barren soil is scattered with bottles, cans and dead bodies. One man heavily rests on his knees, with his helmet removed and his hands covering his face. In another landscape, flags paint the skyline to mark gravesites as signs rest at the heads of bodies wrapped in sheets that are pinned down with rocks. These signs rest at the heads of bodies that are wrapped in sheets pinned down by rocks.

Throughout the Iran-Iraq War, Javadi was denied permission to photograph near the warfront with her husband. She then transitioned to photographing seemingly mundane scenes that more deeply conveyed her outlook on life. This showed her return to a restrictive society after the exhilarating days of the revolution.

After the revolution, the Iranian government reversed nearly a century of progress in women’s rights. Javadi began to capture solemn visuals, such as one of her niece playing the violin to a bare tree, since women were prohibited from performing in public. In another photograph, which Javadi describes as a self-portrait, a dead horse lies alone at the bottom of a ravine.

Three years after her husband’s death in 2010, Javadi created a series entitled “Never Ending Chaos.”  Even when she was unable to photograph from the frontlines, Javadi said she was still obsessed with the time period.

Drawing on Jalali’s images of Abadan and Khorramshahr, Javadi layered fragments of tilework images to reconceptualize scenes of violence from television footage of the invasion of Iraq in 2003.

A face slashed on the forehead is bleeding out, cloned throughout the piece. An atomic bomb erupts in a cloud of smoke, as Javadi seemingly speaks to the countless lives lost in a world caught in an unending cycle of violence.