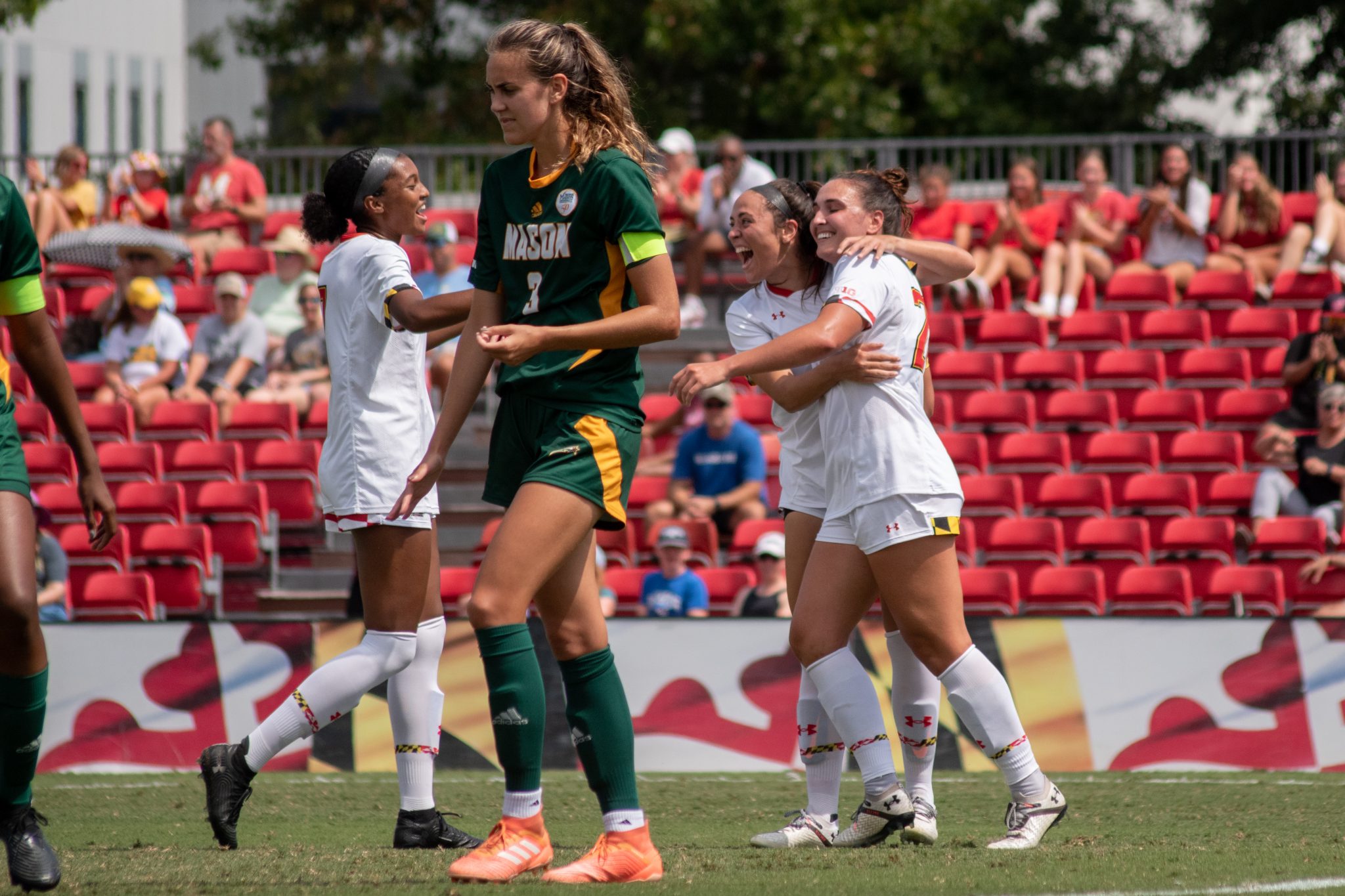 Catherine DeRosa drove up the final third with decisions to make. What was left of the George Mason defense was backpedaling towards their own goal as Maryland players kept pushing forward.

DeRosa found the feet of Alina Stahl with a deft pass, and Stahl slotted the chance far post into the side netting just over 14 minutes into the game.

“[Nemzer] has poured everything into this program since she’s gotten here,” Derosa said. “We’re just so excited to get our first win.”

The Terps gave George Mason few and unideal chances for most of the game. The Patriots finished the game with just three shots and no corners. Maryland goalkeeper Madeline Smith had little work to clean up in contrast to Thursday’s game versus Georgetown, where she was forced to make nine saves.

Stahl’s goal opened up the scoring early in the first half. The tally marked her third of the season.

Maryland continued to trouble the Patriots’ goalkeeper, finishing the half with a total of six shots, four of which fell between the posts. The Terps also ended the half with four corners. They scored on one courtesy of a Sofi Vinas header assisted by DeRosa.

Derosa’s corner from the right side sailed towards the far post and met in the air by Vinas who redirected the ball back across the frame of the goal, leaving the Patriots’ goalkeeper with little hope of making a save.

Maryland had also made frequent substitutions throughout the half with 19 players earning minutes.

George Mason failed to build any rhythm out of their own end as the second half started and couldn’t add any shots on target or corners to their only attempt from the first period.

“The gameplan remained the same, so even though we were up 2-0 we go into every half 0-0, with that mentality and we follow the gameplan,” Vinas said on the momentum continuing in the second half.

Maryland’s offense rebounded from its performance against Georgetown on Thursday, this time racking up a total of 17 shots.

“I think our forwards had excellent movement. So all I had to do was get on the ball and create a little half space and find either their feet or their runs.and obviously they did all the work by finishing it,” DeRosa said.

The Patriots’ defense couldn’t keep up with the Terps throughout the game. The Patriots committed 12 fouls. One of their challenges early in the second half resulted in a skirmish between Maryland’s Juliana Lynch and George Mason’s Nina Wilson that drew yellow cards for both sides.

The game ended with two yellow cards for the Terps and five for the Patriots.

Maryland tacked on a third goal in the 89th minute from Alyssa Poarch. Sofi Vinas drove into the box, leaving George Mason defenders in the dust, before cutting it back for Poarch who drove the shot into the top left corner of the goal.

“Oh my god. I think I shed a tear when she scored. She is a remarkable human being and obviously she’s an amazing soccer player … hopefully you guys saw that celebration from the sideline as well,” Nemzer said about forward Alyssa Poarch scoring.

With their first win secured, the Terps will look to move forward on Thursday when they welcome Wake Forest to Ludwig Field.

“I feel like we have a lot more confidence now,” Smith said. “Scoring those three goals really helped us.”