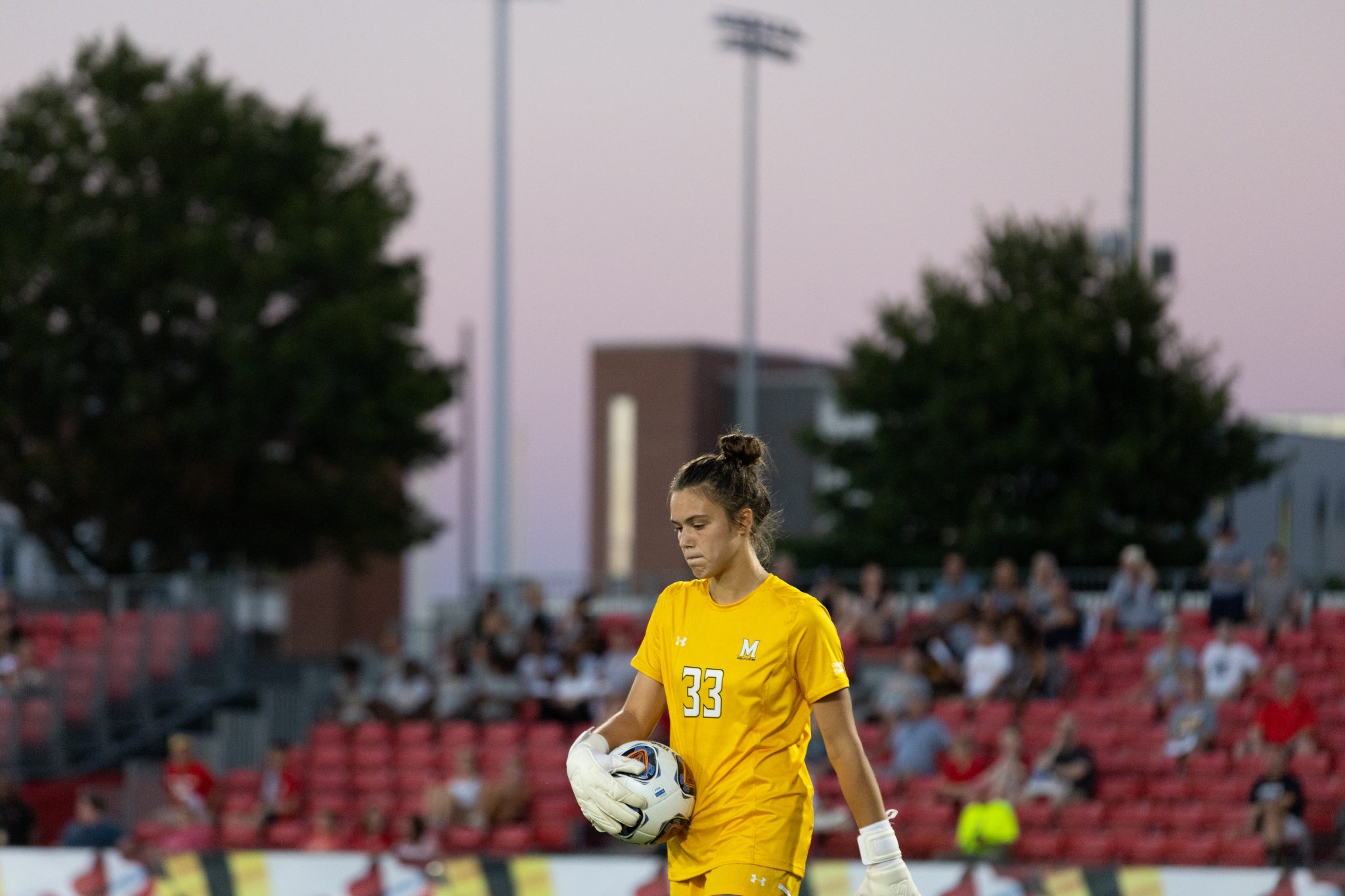 Madeline Smith didn’t have the time to prepare for a Georgetown corner late in the first half. She had just faced three threatening chances in her 18-yard box in under 30 seconds.

The first was met with a last ditch challenge, the second a reactionary save on the ground with her feet. The last chance blasted off the crossbar away from goal.

Smith made a career high nine saves on the night to propel the team to another comeback result.

“I mean we talk about make the saves you’re supposed to make and make one believable save, she did more than that tonight. I’m happy for her to have this moment,” said coach Megan Ryan Nemzer on her star goalkeeper.

Maryland was unable to snap their three-game draw streak Thursday night against Georgetown resulting in their fourth draw of the season — the Terps are still winless under Nemzer after a 1-1 draw.
The first half was largely a Hoya offensive showing. Both teams had a few significant chances on goal early in the half. The most threatening shot for the Terps half came from Mikayla Dayes after she received the right-hand side rifling a shot for the top right corner.

Georgetown goalkeeper Cara Martin dove heroically to meet the shot with a strong hand on her left side, keeping the game scoreless. It was the only save Martin had to make all half.

The Terps began to falter under the Georgetown pressure. The Hoyas racked up seven shots on target out of eleven in the half but heroic defending and goalkeeping from the Maryland backline and Smith kept the game scoreless.
The half was a bit uncharacteristic for the Terps based on earlier performances this season. Despite conceding first in the first three games, Maryland had more shots than their opponents.

This time, the Terps couldn’t muster the same volume of chances offensively.

The second half started out better for the Terps compared to how the first ended. But just under 15 minutes in, Henly Tippens scored from a corner to break the deadlock in Georgetown’s favor.

While it was largely quiet, the Terps eventually found their mojo. With just over five minutes to go the Terps equalized to make yet another comeback result. Alina Stahl met a cross from Mikayla Dayes with a header down into the bottom right corner.

“I thought that they stuck to the game plan. There were moments where Georgetown had the better run of play, but they didn’t break. Once again to show their response when going 1-0 down with a few minutes in the second half, I’m very proud of the fight that the team had,” Nemzer said.

The goal brought Stahl to two goals and two assists so far this season — she’s been involved in every goal the Terps have scored — but deferred praise to her teammates.

“I think it definitely does say more about the team than myself because everybody’s pressing high and honestly I just happen to be right place right time,” Stahl said.

The Terps will continue to look for their first win of the season again against George Mason on Sunday afternoon.