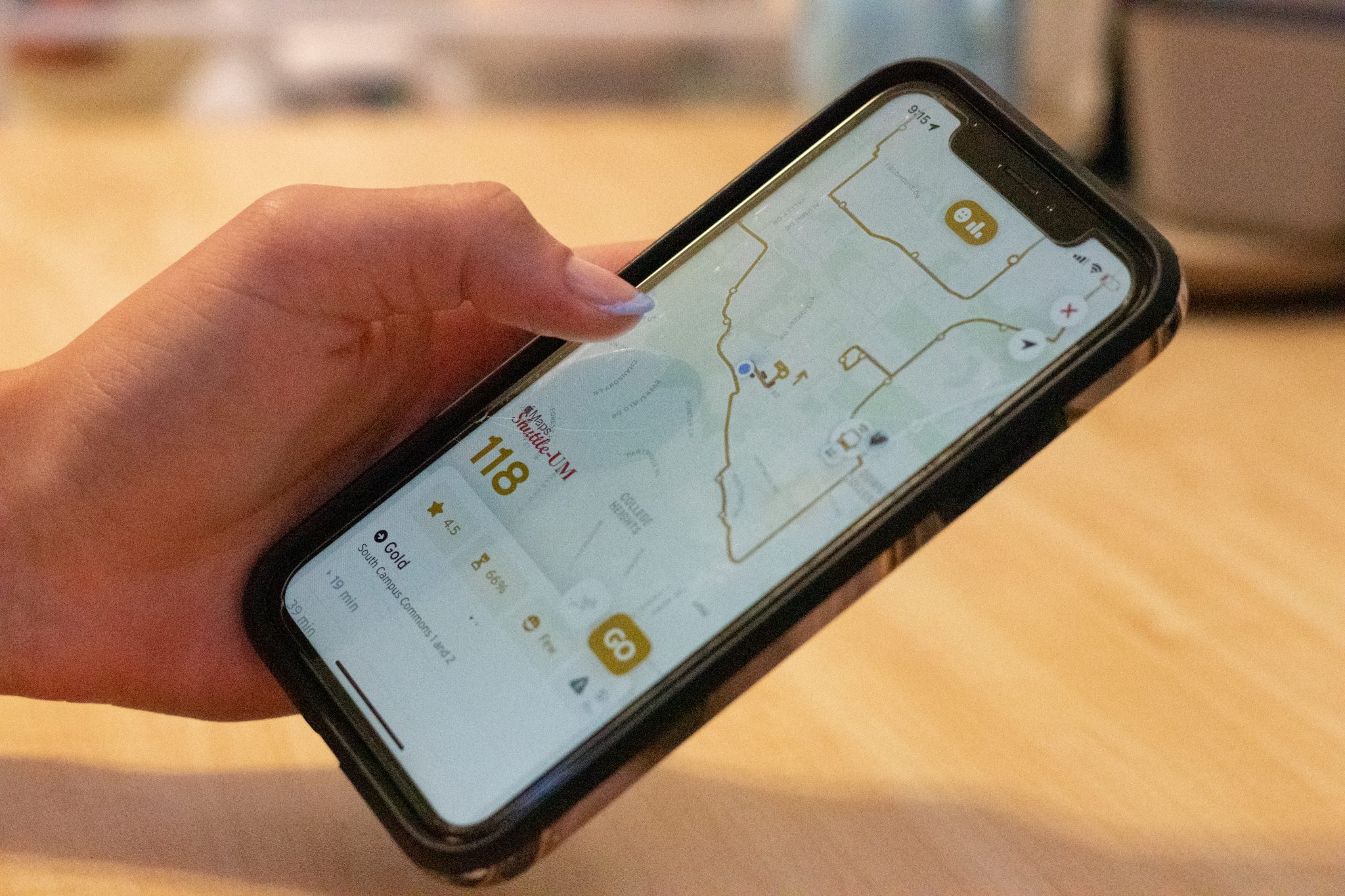 A student uses the Transit app to look at the available bus routes on campus on Sept. 1, 2022. (Autumn Hengen/The Diamondback)

The Department of Transportation Services at the University of Maryland started using Transit this semester as its new bus app to improve bus route location services.

NextBus, the previous transportation app for Shuttle-UM, had been in service since 2009, according to information provided in an email by the university. Transit uses Shuttle-UM’s bus schedule to provide bus routes and stop times. The app should be able to provide real-time arrivals for Shuttle-UM starting this winter, the email said.

DOTS works with Swiftly, a GPS data provider, to include buses into their network, the email said. Swiftly analyzes data points to pinpoint where a bus is and where it will be next.

Features in the app, allow riders to look for information on vehicle capacity, traffic and detours.

While using the app, users can remove bus routes they don’t want to use. Users can filter for Shuttle-UM and Metrobus instead of seeing every bus route near them.

Students have mixed reactions about the change.

Compared to NextBus, students such as Noah McCann, a sophomore secondary education major, said Transit is easier to understand and runs more smoothly.

McCann plans to use the shuttle often because he has classes on South Campus but lives on North Campus.

Liana Stewart, a senior neuroscience major who lives in Courtyards, said Nextbus was difficult to understand.

“It seemed like the bus did not come frequently enough and the times [were] never accurate,” Stewart said. “Last year was terrible with these buses. We’re too reliant on them for them to not work well.”

Jacob Glazer, a junior mechanical engineering major, used Transit before the university partnership began. He likes the app, but understands it can be confusing for first time users who are not familiar with transportation apps.

“The Transit app doesn’t give you a good overview of the system,” Glazer said. “It’s really best for punching in an origin and the destination or just looking at what buses are running.”

Glazer was unable to use NextBus because it was not compatible with his older iPhone and relied on Umo, another transit app that attempted to show all the routes in one place, something that is lacking on Transit, he said.

“It’s really easy to follow,” Bayona Sapag said. “So when they have the tracking, I think it’s going to be the best one.”

“Something to keep in mind is that it is not a Shuttle-UM app, it is an app for public transit that now has Shuttle-UM,” Glazer said.