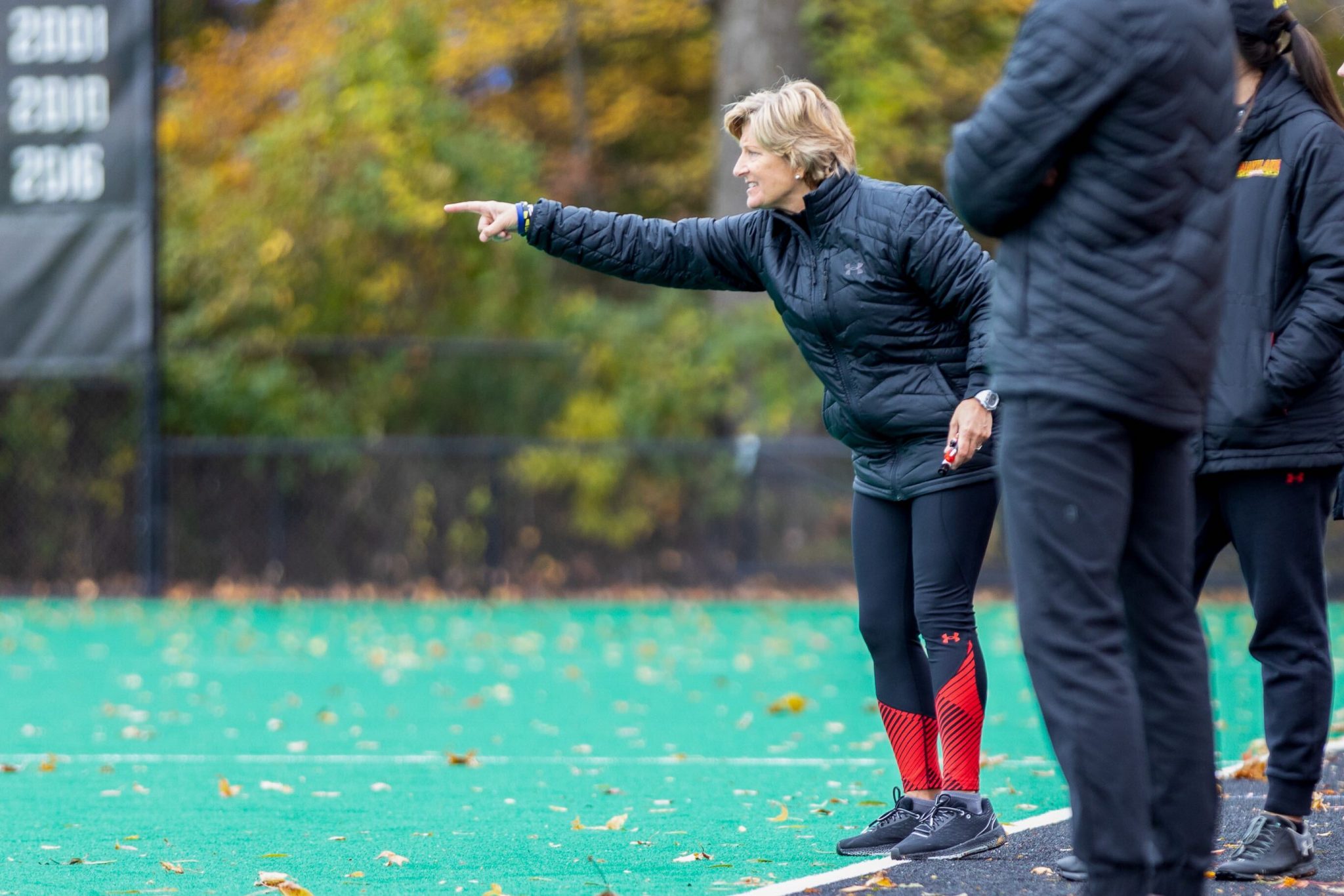 Holding an open competition for the starting goalie position isn’t new for Maryland field hockey coach Missy Meharg. But it isn’t something she’s had to do for a few years — since 2018, Noelle Frost has started a majority of games in net.

But after Frost graduated following last season, Meharg is now forced to turn to someone new. As the coach enters her 35th season at the helm of Maryland field hockey, she doesn’t yet know who her next goalie will be.

Senior Christina Calandra and sophomore Paige Kieft are deadlocked in a battle for the starting spot. Through two weeks of practices and one exhibition game, the two goaltenders are still splitting time equally at the position with no end to the competition in sight.

There’s precedent of how Meharg has handled goalie competitions in the past. As recently as 2016, Meharg split time almost equally between two goalies throughout the season. Sophomore Sarah Holliday and redshirt junior Sarah Bates each played in 18 games that season, Holliday starting 13 of them and Bates starting in 10.

“In my history of doing this I’ve had everything from the first couple of weeks to halfway through the season,” Meharg said. “They’ve alternated matches, and then you come into a segment where somebody has outperformed or is performing best for the team and then you make a call on it.”

And just as she has in years prior, Meharg is prepared to let the battle unfold well into the regular season.

In the team’s exhibition contest with James Madison, Calandra played the first and third quarters with Kieft taking the second and fourth. They held the Dukes scoreless through the first half before allowing one goal each in the second. Kieft logged the only save between the two goalies thanks to a shutdown defensive effort that resulted in only seven shots attempted.

An equal split in time — similar to what was deployed in the exhibition — could be a glimpse of what at least the first few weeks of the regular season will look like.

The competition will come down to who can communicate with defenders and limit shots the best, Meharg said. After the team’s exhibition game versus JMU, she said she would have to rewatch the game to see who did that better.

But she also acknowledged Calandra has a leg up on Kieft in the communication aspect. Calandra is one of the team’s eight fourth year players in a class that has been together since 2019, giving her a familiarity with a large portion of the team’s top players.

“Probably, that is a bit of an advantage for [Calandra] that she’s been around so many of the players,” Meharg said. “For sure there’s that comfort, there’s that friendship.”

Kieft isn’t totally left behind in that regard, though. Before Maryland, she played for WC Eagles, a club field hockey team in Spring City, Pennsylvania, where she was teammates with Hope Rose, Carly Hynd and Rayne Wright.

“They have a tremendous amount of connection there as well,” Meharg said. “They both have that with the team.”

Frost, whom Calandra sat behind for the past three seasons, has remained with the program in a coaching role. Her title is volunteer assistant, a role in which she focuses on the team’s goalies but also includes duties such as helping players academically and filling in as a referee for practice scrimmages.

Her role with the Terps, Meharg and Frost hope, will be the beginning of a long career in coaching. And it allows the former goalie to work with Calandra and Kieft.

“She and I started talking a couple of years ago about, when she had graduated, being able to work with the goalkeepers,” Meharg said. “She’s very good at picking what [Calandra and Kieft] do really well and helping them get better … She’s a great coach.”

Meharg hasn’t had to decide on a full-time goaltender since before her new assistant’s playing career. Still, she won’t make a move before she’s seen all that she needs to.

“They both have great strengths,” Meharg said. “They’re both practicing really well. They’re making good saves. They’re as ready as they can be … I know each one of them would love to be the go-to goalie … I’m not sure when we’ll decide that.”