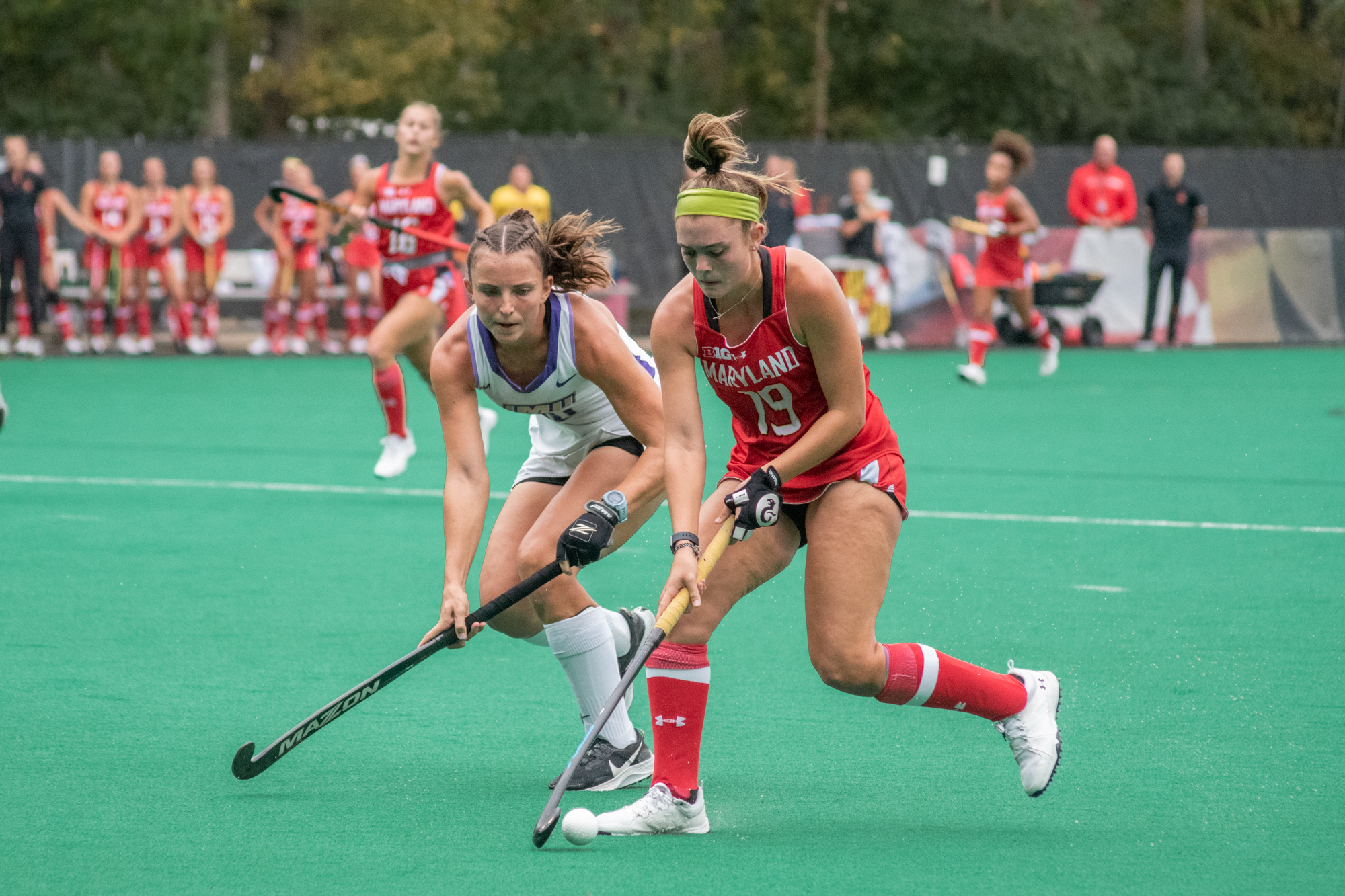 Hope Rose tries to get past a defender during Maryland field hockey's 3-0 win over James Madison on October 10, 2021. (Autumn Hengen/The Diamondback)

Coach Missy Meharg didn’t treat Thursday’s exhibition game with James Madison as such. She didn’t want her team to either.

With just one chance to tune up before Maryland field Hockey’s season opener against Drexel at home next week, Meharg took advantage of the opportunity the exhibition brought to get her youthful and largely new team prepared, treating the contest as if the final score mattered like it will moving forward.

“We’ll use JMU as a game,” Meharg said before the game on Tuesday. “We will open with how we want, we’ll bang at it for four quarters. We want to dominate to the minute the whistle blows.”

Dominant is perhaps the best way to describe Maryland’s 6-2 victory Thursday night. The Terps found the net early and often in the first quarter with goals from Hope Rose, Danielle Van Rootselaar and Belle Bressler. They added three more in the second half, with Rose finding the net for a second time before Emma Deberdine and Leah Crouse did as well.

“We got on the board, we dominated,” Meharg said. “I think we fell off our game when we got three goals up but I think that’s just a young team that is just trying to get their connections together.”

In its first season since 2018 that Noelle Frost isn’t starting at goalie, the Terps still don’t know which of their two goalies will take the reins as the primary starter.

After one week of practices and a scrimmage, Calandra and Kieft split opportunities in net. Calandra got the start on Thursday before Kieft took over for the second quarter. Calandra was inserted again to open the third quarter and Kieft played the fourth.

“They’ll both get an opportunity to compete at the beginning,” Meharg said Tuesday. “They’re both practicing really well. They’re making good saves. They’re as ready as can be.”

Together, they held James Madison scoreless through the first half. But as the sun set on a complex undergoing a demolition that knocked out parts of the facility next to the field, the Terps couldn’t keep the ball out of the net in the second half.

“Paige had a really rough time, this field without the building with the sun is going to be a problem,” Meharg said, noting that Kieft frequently had to block the sun with her pads.

Calandra faced a similar hurdle when she played the third quarter, protecting a net that faces west. That’s where she allowed the Dukes’ first goal before Kieft allowed hers in the fourth.

“It’s a little bit disappointing that the field is like this until this construction is done,” Meharg said.  “It’s east-west … it’s a bummer.”

After the game, the two teams took turns practicing shootouts, with Calanda and Kieft getting five attempts to save a shot each. Calandra allowed all five shots to score while Kieft only let two get through.

Calandra, who has sat behind Frost for the past three seasons, has the advantage of chemistry with the backfield, a component Meharg said will be key in determining an eventual No. 1.

“She’s a fourth year and that whole class has eight of them together,” Meharg said Tuesday. “For sure there’s that comfort, there’s that friendship.”

For now, Meharg has no timetable for when she’ll name a starter and is prepared to continue to split time well into the opening weeks of the regular season, something she said she’s done with goalkeeper competitions in the past.

“I’m not sure when we’ll decide that,” Meharg said Tuesday. “They’re very fond of each other, they do super well supporting each other. I know each one of them would love to be the go-to goalie. We’ll readdress at some juncture.”

The newcomers are fitting in

Maryland welcomed two graduate transfers this offseason in Leah Crouse from Duke and Danielle Van Rootselaar from Brown. Meharg was beginning to sense that the two additions were quickly settling in with their new teammates through a week of practices, and that feeling was confirmed on Thursday.

Van Rootselaar scored the game’s second goal less than two minutes after Crouse assisted on the first. In the fourth quarter, Crouse, who Meharg named the player of the game, added a goal to stretch the Terps’ lead to 6-1.

“[Crouse] was just ruthless in her running,” Meharg said. “She can play forward, she can play midfield. She really breaks teams. [Van Rootselaar] has to get a little more used to the position she’s playing, kind of like a free defender. Sometimes she’s just not sure how deep, how high, how left, how right that is.”

Rose, last season’s Big Ten Freshman of the Year, slapped in the shot assisted by Crouse. The goal was both a look at what could be ahead of this season and exemplified the connection the newcomers already have with their teammates.

“They came in not really knowing anybody and have really stepped it up,” Rose said. “I’ve seen nothing but hard work and dedication to this team.”

In recent seasons, the Terps haven’t started games to the standard Meharg would like. To her, it sometimes took them too long to “warm in” to a match, and she wanted that to change starting Thursday.

“That’s something we want to avoid,” Meharg said Tuesday. “[We want to] get going at the goal cage right away, get into the circle.”

Maryland opened the game just as Meharg wished, gaining a 3-0 advantage less than halfway through the first quarter. Rose scored just over four minutes in, Van Rootselaar doubled the lead a minute later and Bressler added a goal seven minutes in.

“We talked about it, and I’m super happy with that presence,” Meharg said.