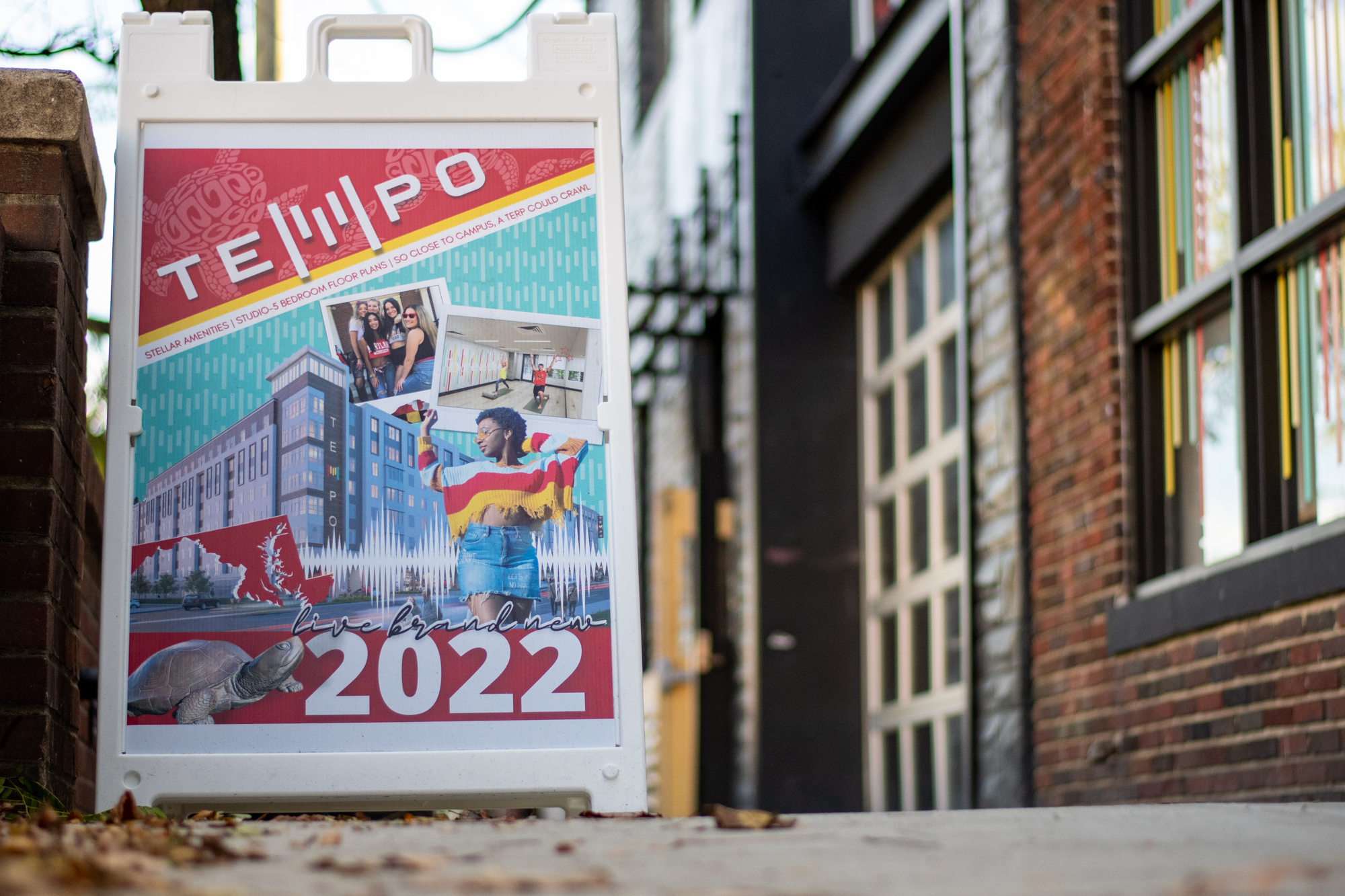 A sign advertising Tempo apartments outside their leasing office on Route 1 on Oct. 28, 2021. (Joe Ryan/The Diamondback)

I, like many University of Maryland students at some point in their college careers, will be living in off-campus housing because I want to enjoy the fruits of greater privacy and freedom. Also given the tremendous financial burden of attending college, I’d like to save a little bit of money on housing this year.

However, finding affordable off-campus housing in College Park is an arduous task. The housing market has become so absurd that I consider sharing an apartment bedroom with someone else for only a little less than $1,000 to be an absolute steal.

In my housing search for this upcoming school year, I found two prevailing options; the aforementioned new, expensive complexes, which cater to students with financially stable backgrounds and command a pretty penny, or to live in a less glamorous, albeit slightly less expensive, house off campus. Neither option is ideal.

Apartments are only getting more expensive with the newest, Tempo and Aster, charging more than $1,000 for a bedroom. However, off-campus houses are not always within walking distance from the campus, forcing students to count on this university’s unreliable shuttle system or own a car. From high gas prices to exorbitant on-campus parking costs, this may not be a viable option either. Worse yet, because landlords know these students have nowhere else to turn, they may see it as an excuse to not provide livable accommodations with their units.

In all of this mess, where is the middle ground? Where can students find reasonably priced and reasonably well-accommodated housing to live in off campus?

Inclusionary zoning can provide that middle ground by forcing developers to offer a certain percentage of units in new housing developments to residents below the median income. This is an effective solution because it allows College Park to keep incentivizing equitable housing accommodations without inhibiting the density and growth of these complexes catering to the market of higher-income students.

Counties in Maryland and Virginia, including Montgomery and Fairfax counties have implemented inclusionary zoning policies, which has shown success in increasing the availability of affordable housing in those areas. Montgomery County’s Moderately Priced Dwelling Unit program makes it easier for first-time homeowners and low-income buyers to get into the housing market by requiring at least 12.5 percent of units in projects with 20 or more total units to be MPDUs. While this type of policy certainly constricts developers to some extent, it is effective at doing its job: increasing the inventory of affordable units. The MPDU program is responsible for generating 13,000 affordable units across Montgomery County as of 2012.

Housing developers and lawmakers alike in Prince George’s County have expressed concerns about inclusionary zoning being infeasible during economic turmoil. There will certainly be a tough balance to strike because predicting when an inclusionary zoning project is not economically viable is difficult.

In Montgomery County, the increased risk developers take in developing units that they have to list at below market rate does not come without compensation. The further developers go over the specified quota of MPDUs, the more densely they can pack their developments. That means developers can mitigate some of their potential losses by building more units to recoup their investments.

A non-luxury housing market where demand seems to be going up at the same rate as prices is not sustainable. This economic path College Park is heading down will create financial strain that could make attending college for lower-income students insurmountable. But surrounding counties have the right idea. College Park lawmakers know this. Inclusionary zoning must be implemented in this city.