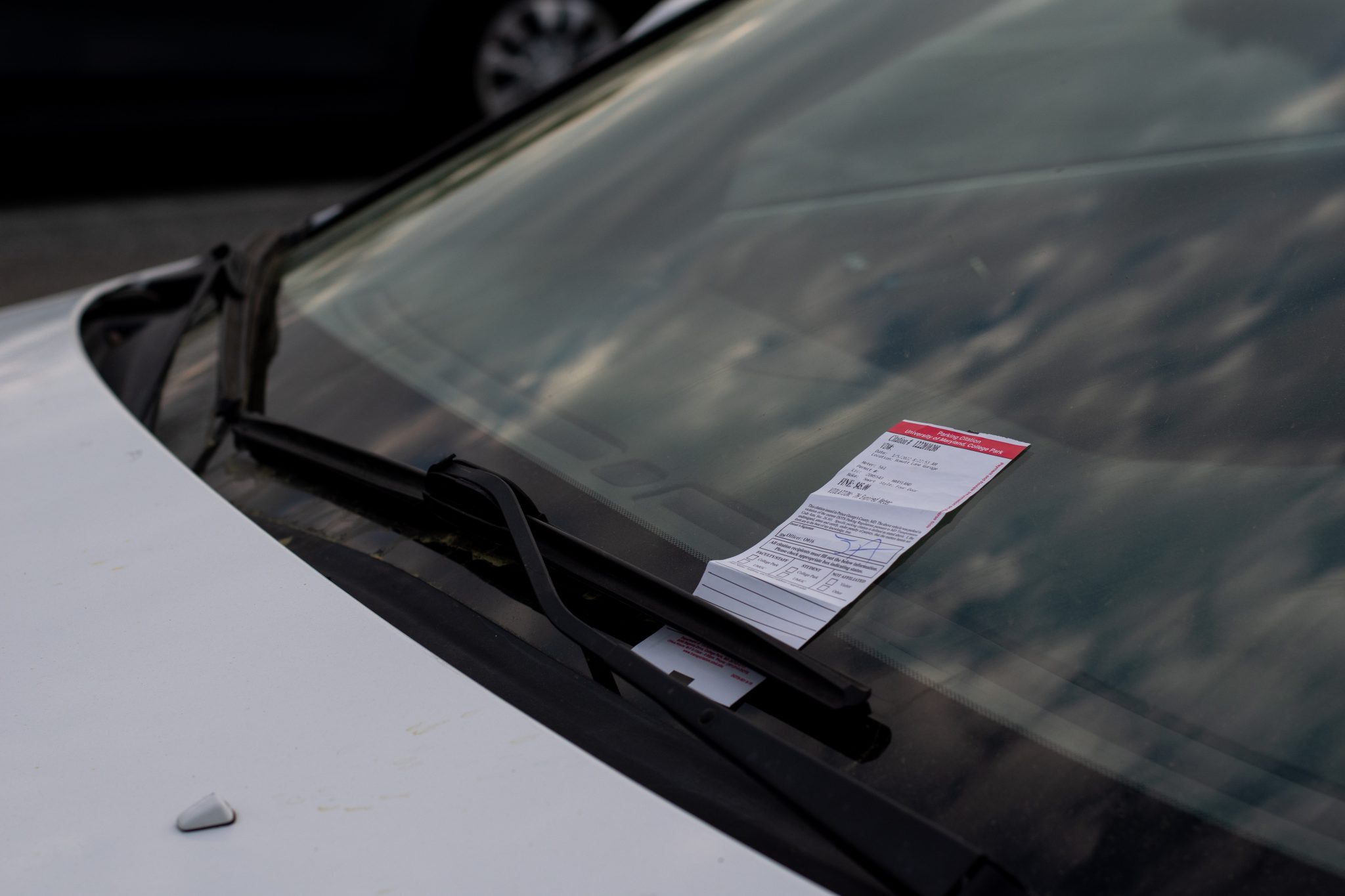 A parking citation sits on a student's windshield on April 24, 2022. (Autumn Hengen/The Diamondback)

Being a full-time student and part-time worker at the University of Maryland is no easy task. And yet, the university continues to shoot itself in the foot — and by proxy any prospective student workers — by diluting the employee pool through a unanimously despised and counterintuitive measure: parking fees.

Let’s say I wanted to work at the Eppley Recreation Center this summer to keep things running smoothly and make some disposable income. I apply for the job, ace a series of interviews and make my way into the Eppley family. Except there’s still one more hurdle: I now need to sink $168 for a commuter parking pass to go to my job for just the summer if I don’t live near the gym. At the base rate, students now earn — $15 per hour — that parking spot now costs more than 11 hours of labor without taking into account other expenses such as gas money or groceries. Having to pay to work is an incredibly bleak and dystopian concept. This university needs to either greatly subsidize parking for its own workers or make it free altogether.

This problem gets even worse during the academic year when 24-hour positions such as community assistants open up. Many dorms have someone at the front desk working overnight every day. From my experience as a community assistant, that ungodly shift is an expectation of you as an employee, not something that gets any applause. If I were a near-campus commuter looking to contribute to and join the community as a community assistant, why on Earth would I go from paying the $362 annual commuter pass to the $701 pass just to get access to overnight parking to work thankless shifts? And just like that, roughly 20 percent of the university community — those who hold a commuter parking pass — are effectively axed from this employee pool during a labor shortage.

It’s a simple numbers game. With the increased accessibility to employment through the removal of financial blockades, more people are able to apply to jobs they previously couldn’t. With this increase in applicants, positions around campus will also receive more qualified applicants, a gift any hiring manager would appreciate.

In a country where almost half of its people can’t afford a surprise $400 expense, forcing workers to bear the full burden of a parking spot is objectively unreasonable and akin to multi-level marketing tactics such as making new workers pay an up-front cost to simply participate in the business. This policy almost surgically penalizes financially vulnerable students looking for work at a time when the university and its operations would benefit from more job applications, not less. By getting rid of the hindrance that is exorbitant parking fees, those with fewer means would be able to earn some money and improve their material conditions.

Additionally, parking fees further strip commuters of opportunities to feel rightfully ingrained in the university community, a valid complaint commuters have held for a long time. In contrast, a particularly common but invalid complaint in greater American society is the claim that “nobody wants to work anymore.” A University of Calgary researcher briefly documented this common gripe. The problem is not the willingness of people to work, though you and I would probably be much happier if we won an infinite lottery and never had to work again. It’s that those begging for employees are also choosing to offer them subpar wages and benefits. This university is evidently no stranger to this.

Simply put, the administration and respective campus employers need to either heavily discount parking for all employees on campus or make it free for them.

So where does the funding come from? One study on the university’s financial situation found “Any claims that College Park is in financial trouble or needs to make draconian cuts are not supported by the empirical evidence … College Park is doing very well financially. The only thing that should be cut is administration.” The mismanaged funds in university overhead along with increased state appropriations and yearly increases have compounded to the point that, had university President Darryll Pines been an out-of-state Terp, he would have graduated paying less than a third of what out-of-state students are paying in tuition today, accounting for inflation.

This campus would see a boost in community engagement, competent and qualified employees and socioeconomic mobility all for the low, low price of giving the workers what they deserve.