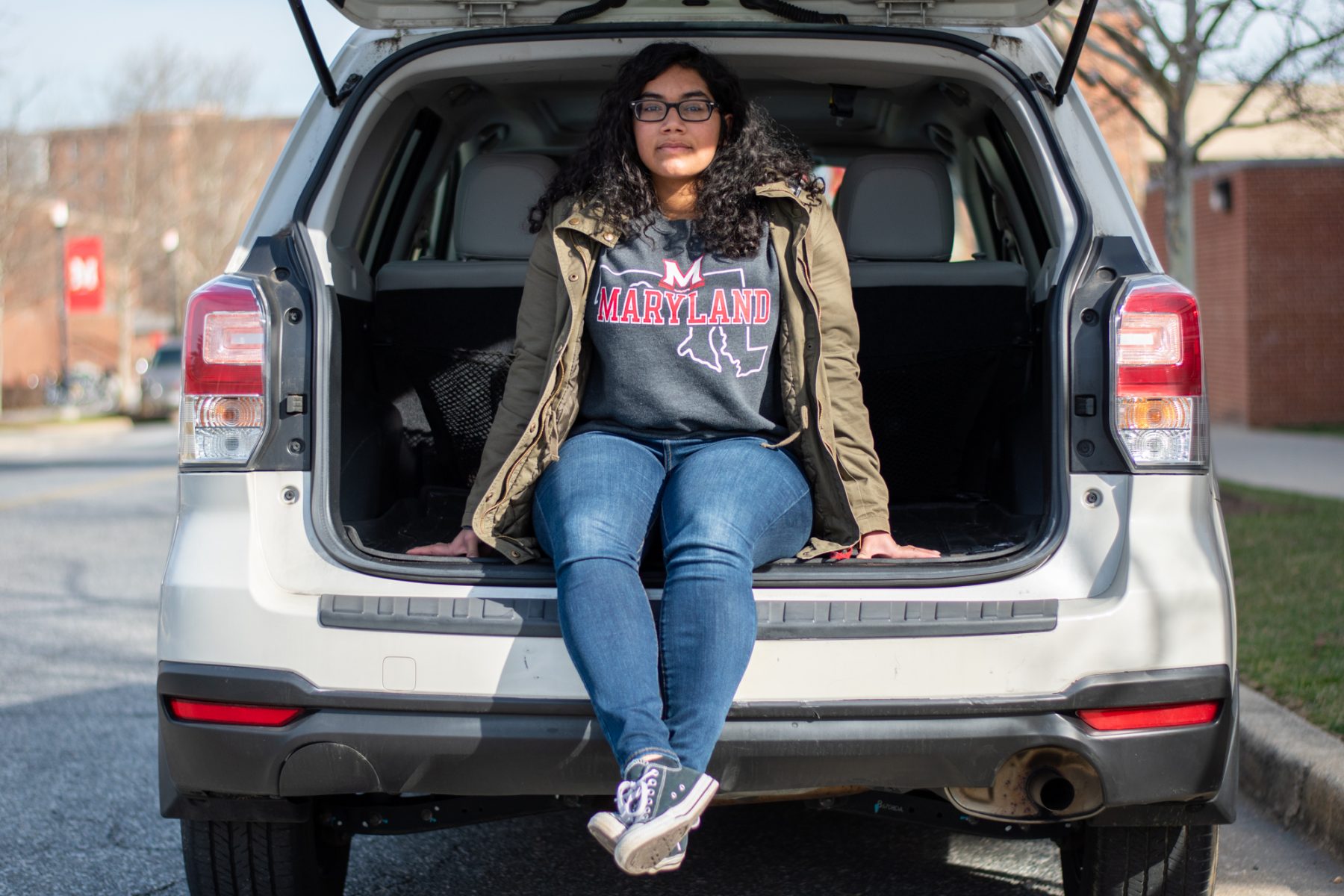 Graduate student Stephanie George, a commuter, sits in the trunk of her car on Feb. 24, 2020. (Joe Ryan/The Diamondback)

By Catherine Wilson
For The Diamondback

Stephanie George’s day starts at 5 a.m., Monday through Friday. By 5:45 a.m. she is out the door of her Ellicott City home and on the road, all before the sun rises. For the next 40 or 45 minutes, George sits behind the wheel of her Subaru, listening to podcasts to gear up for the long day ahead.

Once parked, George, a graduate student in the geospatial intelligence program, hauls her backpack over her shoulder, weighed down with everything she needs for the day, before beginning the long trek from her parking spot on North Campus to South Campus, where the technology she uses for her major is located.

Though the time she leaves her home has changed over the past few semesters to fit the increasing amount of traffic on the road, this has been George’s life for the last four years.

George is one of 8,002 students at the University of Maryland who hold a commuter student parking pass. Of the roughly 41,000 students enrolled at this university, about one in five students on this campus hold a commuter parking pass, according to recent data obtained from the Department of Transportation Services.

In her final year commuting, George doesn’t know how she did it for so long.

“It’s a lot of mental gymnastics to make sure you get everything done on time and still make time for yourself,” she said.

Parking is vital for someone who commutes by car, and with Purple Line construction on the campus limiting the number of spots, some students say parking is getting more competitive to find.

“Construction has really impacted the amount of parking spaces that are available for students,” George said. “That’s why students come here at ungodly hours just to get good parking.”

During her time as a commuter student, George says she experienced an incident that affected how she plans her day on this campus. While driving onto the campus one day, she said she was followed by a vehicle. Later in the day, she said she returned to her car to find the back window smashed.

“The entire back window was shattered and there was glass all over the seat, and that was very scary,” she said. “I never drove that vehicle back to campus. That’s why I come to campus so early, so I can get a nice safe spot up front.”

George isn’t the only commuter student worried about their safety on this campus.

Pinky Dulaca, a junior physics major, commutes from Silver Spring and has concerns about walking to her car at night.

“Last semester there were a lot of police reports of women specifically getting attacked outside of campus,” Dulaca said. “[I’m] like an easy target. I’m always wary of my surroundings.”

Dulaca said her fear of walking back to her car alone at night makes her take a longer route so she can stay in well-lit areas of the campus where she feels safer.

As for the late nights at school, some commuter students stay later to avoid traffic or delay the drive home so they don’t have to break themselves out of the mindset of working.

Avery Calender, a senior nutritional science major, commuted from Fort Washington for two semesters, but now lives on the campus. His days of separating life at school and life at home are far behind him.

“I had to stay here later to stay in the mind frame of getting my work done,” he said. “I was staying until two in the morning because I have to get this [work] done because once I get home I’m going to be a potato.”

George shared a similar feeling toward needing to go home at the end of the day knowing she had a long commute.

“I don’t want to pack up all my stuff and go home, and unpack everything, get started and get into the zone again,” she said. “It really was very much a burden.”

Another common thread among commuter students is not being able to get involved in activities and life on the campus because of their commutes.

Many clubs on this campus meet in the evening hours after classes conclude, and adding a commute to a late meeting time is sometimes too much for commuter students to handle.

Dulaca expressed difficulty getting involved with on-campus clubs and activities.

“I got into a dancing group but their practices were from 8 to 10 p.m., so I had to say no to that,” she said. “That is true for a lot of other clubs too that I wanted to participate in.”

For some commuter students, it is difficult to invest their time into a place they live so far from and not be able to take part in everything that campus life has to offer.

“There’s definitely this idea that you have less freedom, you have less opportunities, because you’re constrained by your commute,” George said. “And it really takes away the college experience from you.”

Students say life as a commuter is a constant balancing act, but few feel they have the option to move closer to the university’s campus for financial reasons.

Dominic Escorpeso, a senior history and philosophy major, spends anywhere from 50 minutes to up to 2 hours one way commuting from his home in Waldorf.

“It’s cheaper to live at home, than go [live] there [on campus],” he said. “Finances are more important to me than the idea of [living] there … So I guess time over money in that sense. So commuting is definitely hard, but I think it gets really tiring.”

Students living on this campus can pay anywhere from about $6,300 to $11,000 a year — and that’s not even including a meal plan the university requires students who live in dorms to have. Compared with a $336 annual commuter student parking pass, sometimes the financial burden of living on the campus is too much for students to bear.

However, some students believe there is more this university could do to help commuter students and make life easier while on the campus.

“I felt like although I was on campus, I existed outside of it, which made me not part of the community,” George said.

This university works with commuter students through the Transfer and Off-Campus Student Life Center, where George works, which provides a “safe space” to students who struggle to be a part of campus life. But George said with its limited space and resources, there is only so much the center can do to support the transfer and commuter student population.

Students offered possible solutions to ease some of the problems they face on campus as a commuter student.

Dulaca proposed a place for commuter students to store their belongings so they didn’t have to carry their loaded down backpacks. Calender half-jokingly suggested bridges instead of crosswalks for students to walk across to mitigate the traffic through this campus.

George says living out of her backpack while she is at school is “a little bit demoralizing,” so simply providing commuter students with a place to store their lunches could go a long way.

Commuter students depend on being able to plan a daily commute, which recently became more challenging for students due to the ongoing construction on campus.

“Once you find a route that works for you, having that taken away, taking away that sense of normalcy, like the fact that you belong, like … this is my normal route and shutting down that normal route, the one you feel is yours and makes you a part of this campus,” George said. “It just isolates commuters.”