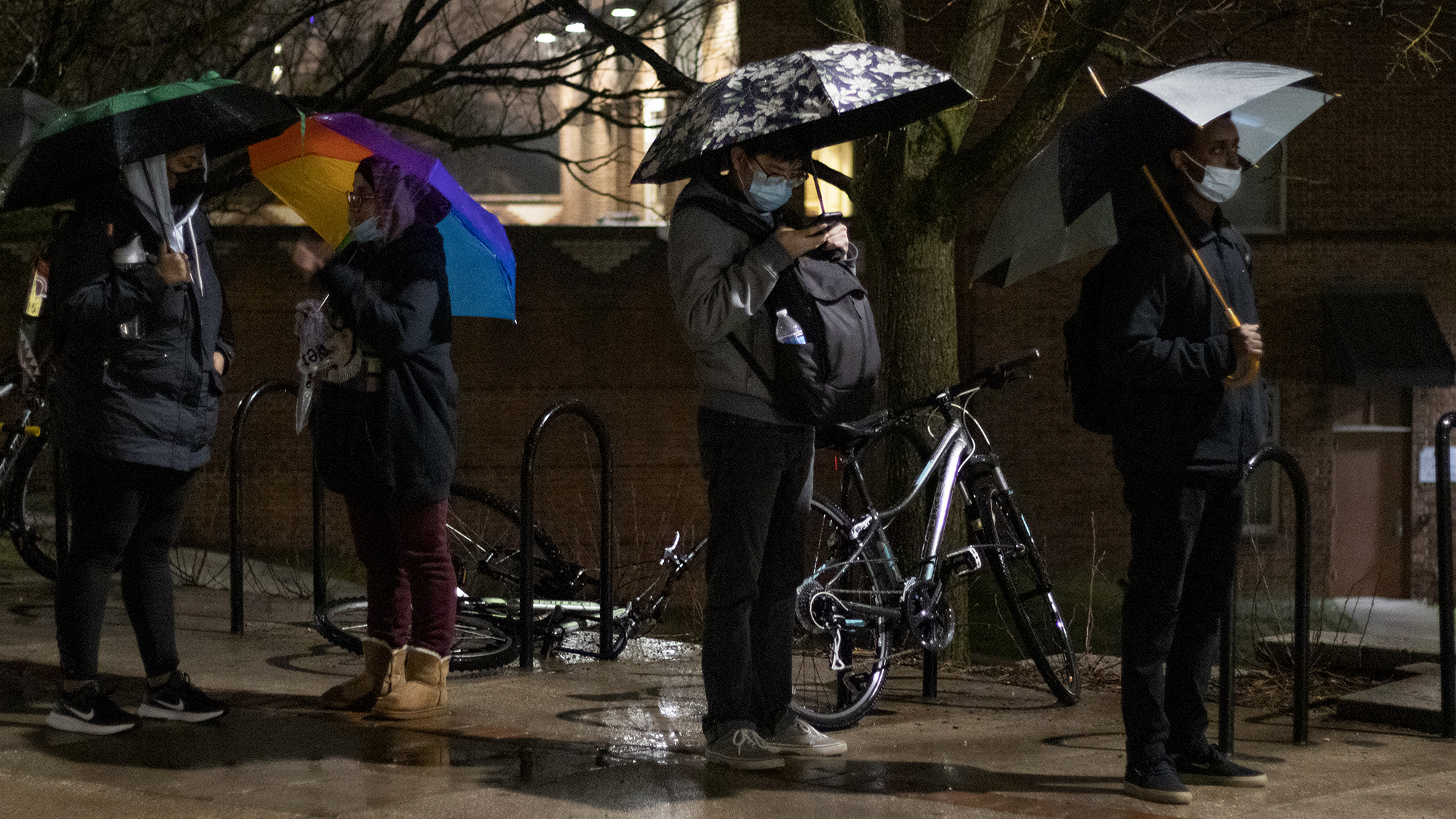 Commuter students stand in line for the Gaithersburg buses outside of Stamp Student Union on Feb. 3, 2022. Students have experienced long wait times for the buses, which sometimes don't come during their scheduled times. (Daryl Perry/The Diamondback)

Astrid Widjaja said she left her University of Maryland class early to make the final #141 Shuttle-UM Park and Ride of the day from Gaithersburg during the first week of the spring semester. When she arrived at the stop at Stamp Student Union, she realized the bus left without her and eight other students.

When Widjaja missed the bus, she said the university’s Department of Transportation Services’ office was closed. And when she called Stamp, she was told to find an Uber even though she was a commuter.

“[Commuter students are] mostly commuting because they don’t have a way to get to school, especially with a pandemic,” said Widjaja, a senior biological sciences and psychology major. “It’s understandable that most students can’t afford parking and gas for traveling to school every day.”

Her experience, though, is not unique. Last semester, students were left stranded in Gaithersburg in August. At the time, the #141 shuttle made six trips per day, but with only one bus per trip, there was limited space for all of the commuters taking the route.

Then, DOTS announced it would provide multiple buses for the first and final trips of the #141 route each day.

Now, several months later, commuter students continue to face difficulties with the #141 route. A recent Reddit post to this university’s subreddit showed a number of students waiting for the #141 bus. Multiple students said the shuttle would be overcrowded, wouldn’t arrive on time or wouldn’t come at all.

The #141 still makes six trips a day — still less than before the pandemic. The university currently provides two shuttles per stop.

The route first picks up students in Gaithersburg 8:20 a.m. and leaves the campus for the last time of the day at 7:35 p.m. The route’s first drop off at campus doesn’t allow students to take earlier classes unless they have alternative transportation. The end time can also affect a student’s ability to hangout with friends or participate in on-campus activities such as clubs.

However, Widjaja said she has experienced inconsistent bus departure times from campus, leaving commuter students behind.

“I don’t understand why the #141 bus is having an issue,” Widjaja said. “[They’re] not prioritizing commuter students for some reason, we pay the same amount of tuition. We are excited to go to class every day, even though we have to commute long hours.”

Instead of the typical university shuttles, Atlantic Coast Charter is driving the route for the spring 2022 semester, according to the DOTS website.

Nancy Vaughn, a UM-Shuttle driver, drove the Gaithersburg route two years ago. Vaughn said if a bus was late it was usually due to traffic.

“What they need to do [is] to inform management that they’re being left behind, those two buses aren’t enough and then need to specify at which time the buses are leaving,” Vaughn said.

DOTS did not respond to The Diamondback’s request for comment.

Paola Reyes, a junior government and politics major, said she used to like taking the #141 shuttle because of how close the Gaithersburg stop was close to her house and she never had any problems with the service.

Since the beginning of this semester, Reyes said she has been left behind twice. On the second day of this semester, she arrived to her 10:15 a.m. bus early. However, the bus was already full and she had to wait an hour, prompting her to be late to a class.

On another day, Reyes had to wait for four hours after she missed her bus because it was already full 20 minutes before departure.

“The bus driver saw me go into the bus and I told him there aren’t any seats available. He didn’t say anything to me,” said Reyes. “I went back out to the bus stop area outside … the bus left and there were three other people with me.”

Xylon Funes, a senior computer science major, said he usually drives to campus. When he takes the bus, though, it’s usually five to 10 minutes late.

“It was a mess,” Funes said. “It was like around 20 people there waiting for that. There was nobody who showed up.”