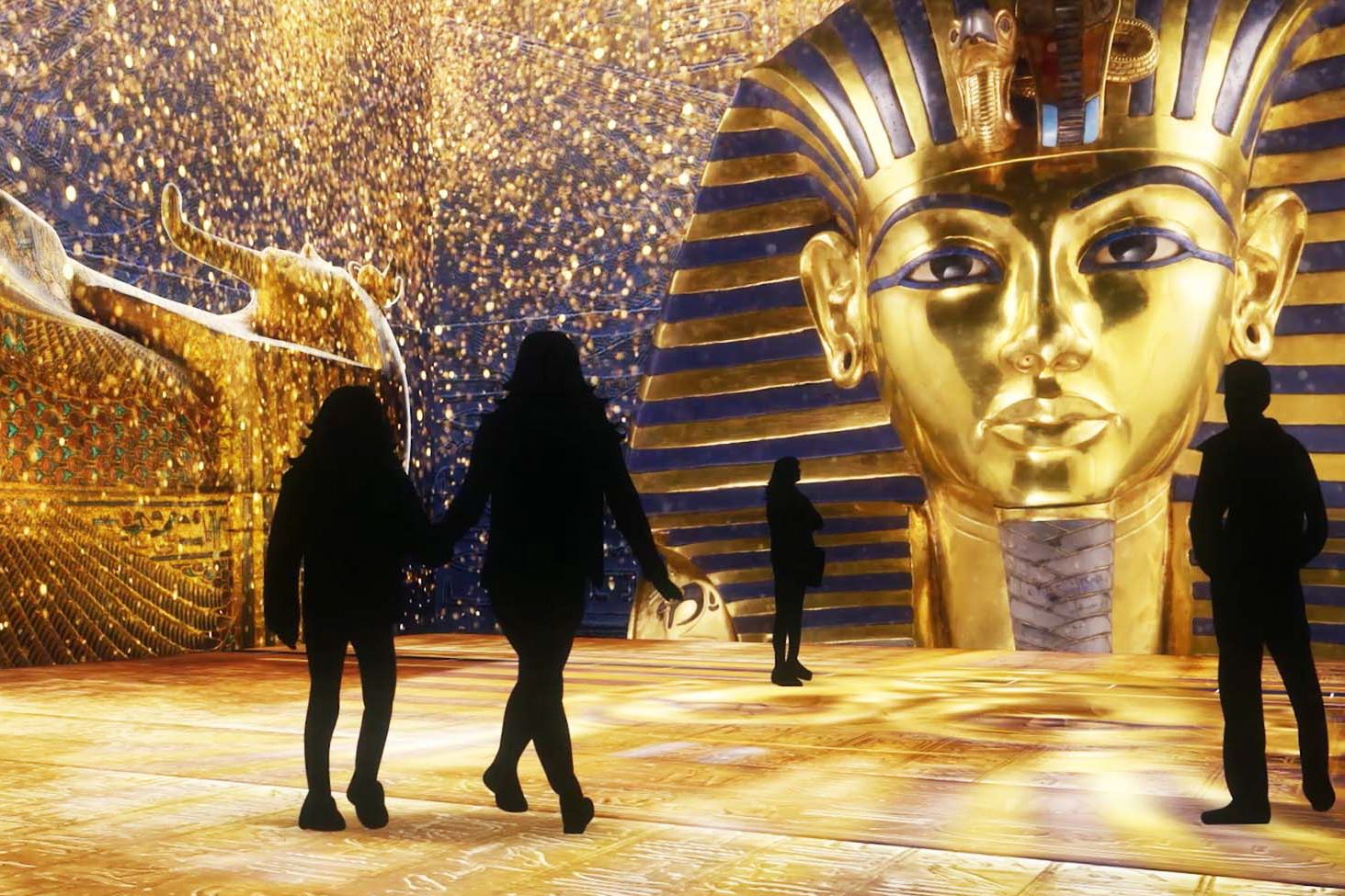 (Photo courtesy of Beyond King Tut)

Placed on the throne at nine years old, King Tutankhamun, or King Tut, was the last Egyptian pharaoh of the 18th dynasty. The boy king’s life was short, but his immortal presence, lost to the world for centuries, uncovered a unique history. This is a story of a young prince, his restorative rule and his journey to the afterlife.

The National Geographic Museum in Washington, D.C. presents “Beyond King Tut: The Immersive Experience” to transport visitors into the ancient land of wonders. Open until Feb. 6, 2023, guests can travel to Egypt’s Valley of the Kings and step into Tutankhamun’s tomb through video animation and soundscapes.

Celebrating the 100-year anniversary of the unearthing of Tutankhamun’s tomb, which has been heralded as a legendary moment in the study of ancient civilizations, the exhibition seamlessly guides newcomers to Tutankhamun’s story through the archaeological significance of the boy king’s tomb.

More than 3,000 years ago, Tutankhamun dramatically rose to power as the king of Egypt, and 10 years later, he was dead. In a hasty attempt to give the short-lived king a proper burial among his predecessors in the Valley of the Kings, Tutankhamun’s tomb was built below the valley floor,  hidden for centuries from tomb robbers and archeologists alike.

The only Egyptian royal burial chamber ever found in “situ” — meaning exactly as the priests left it — Tutankhamun’s four-room chamber held about 5,400 artifacts, including amulets placed within the seven layers of linen bandages binding Tutankhamun’s mummy.

These gems symbolize pillars of life and death that served to guarantee rebirth to the young king. Daggers, shoes and boats were among the artifacts left in the chamber to help Tutankhamun in his perilous journey to the afterlife in his quest to become immortal. Even in the rushed burial, time was taken to position gold stalls on the boy king’s fingers and toes to symbolize his transformation from a king to a god.

Burrowed like a Russian nesting doll, Tutankhamun’s mummy was protected within a series of four gold sarcophagi, each engraved with shrines of protective goddesses to ward off evil spirits and tomb robbers.

The tomb remained concealed until 1922 when a 12-year-old waterboy digging a hole to base water jars struck stone. Brushing sand aside, the boy, Hussein Abdel Rasoul, discovered a flight of stairs, according to one version of events told in the Valley and featured in the exhibition.

British archaeologist Howard Carter is credited with discovering the tomb, making no mention of the boy in his official accounts and instead claiming the first step was found under an ancient workman’s hut. Lee Keedick, the New York-based agent who organized Carter’s lecture tour across North America in 1924, claimed Carter said in person and later in print the waterboy discovered the step.

These disputes about the discovery aren’t surprising. In 1922, amid rising nationalism, Britain unwillingly recognized Egypt’s independence, handing the reins of power back to Egypt’s government. After years of taking the backseat during European-led excavations where Egyptian participation was limited to manual labor, Egypt regained control, per the exhibit.

With countless Egyptian artifacts already shipped around the world as Europeans colonized excavation sites, National Geographic wrote Egyptians had long been disconnected from their heritage as a result. This made the claim over Tutankhamun’s tomb all the more important. Tutankhamun belonged to Egypt, and the contents of the tomb were to be housed in the Egyptian Museum in Cairo.

The artifact-packed room took Carter and his group about 10 years to catalog, each item telling the story of Tutankhamun’s life in ways that are missing from ancient texts, according to the exhibit.

Little of the king’s life was recorded beyond his efforts to undo his father King Akhenaten’s radical religious and political decisions. Tutankhamun reestablished the gods of the traditional Egyptian pantheon, moved the capital of Egypt back to Memphis and restored the Egyptian sense of cosmic and political harmony and order.

Nevertheless, the afterlife was not guaranteed to anyone, not even a king. Although the ancient Egyptians believed Tutankhamun successfully passed through his journey to the underworld and became immortal, his tomb was forgotten, a footnote in Egyptian history, until its rediscovery.