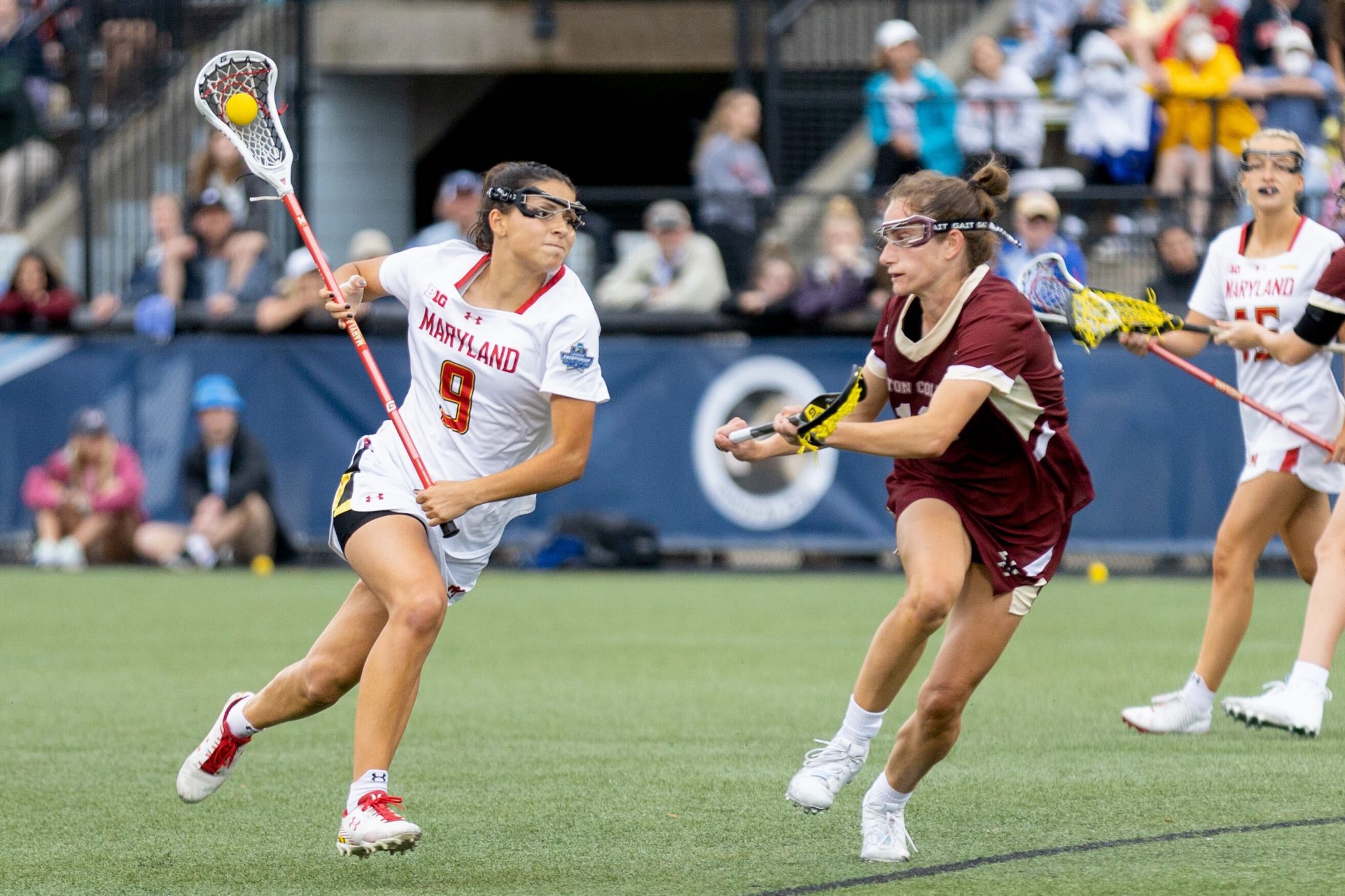 Libby May attempts to sprint past a defender during Maryland women's lacrosse's 17-16 loss against Boston College on May 27, 2022. (Riley Sims/The Diamondback)

With seven minutes left and a 16-13 lead against Boston College in the national semifinal, Maryland women’s lacrosse had a chance to contend for the NCAA championship.

But as the seconds wound down, lapses in composure allowed the Eagles to launch a 4-0 scoring run. Their final goal with just 18 seconds left was enough to win the game, 17-16, and end the Terps’ season.

It was a new situation for many players on coach Cathy Reese’s roster. The team made 11 straight Final Fours from 2009 to 2019, but a canceled 2020 campaign and a disappointing 2021 season meant many Terps were appearing in their first national semifinal.

The only active player with championship weekend experience was graduate co-captain Grace Griffin.

“There’s some moments where our inexperience showed,” Reese said after the semifinal loss. “I’ve said that from the start, we have a really young team.”

Although inexperienced following two shortened seasons, the Terps reemerged as one of the top teams in the nation in 2022. In addition to a couple of key transfers, Maryland’s younger players became more confident and mature, Reese said.

Reese said the Terps came into the year hungry. As practices ramped up, along with the return of a normal fall ball schedule, she was impressed with the growth of her players.

One of the standout players was IWLCA goalkeeper of the year, Emily Sterling.

“She just stepped up,” Reese said. “Every day at practice you could just see her confidence growing and her making some amazing saves.”

Sterling had a stellar season, finishing her junior year with 169 saves and seven games with double-digit stops. She ended the season with the nation’s second best save percentage at 53.1 percent and goals against average at 7.87 goals allowed per game.

In Maryland’s last regular game of the season, attacker Hannah Leubecker recalled a Michigan defender being in awe of one of Sterling’s saves.

“[Sterling] made a save … with the butt of her stick, and we were just cracking up because neither of us knew how she did it,” Leubecker said.

Reese said earlier in the season the Tewaaraton nominee had become an “anchor” for Maryland’s defense. Sterling’s confidence in goal has also shaped her into a defensive leader.

“One thing that we’ve been highlighting and emphasizing is just our communication and trusting each other back on that end,” Sterling said before the Big Ten tournament. “When we play together as a unit, we’re amazing and unstoppable.”

Reese and her coaching staff don’t need to do much to motivate Sterling and the rest of the team. Players come into the program not only wanting to be a part of the success, but also just wanting to get better.

“They are motivated because they want to be the best that they can be,” Reese said. “We as coaches can lead and can guide them and can kind of keep things moving in the right direction.”

Individual growth from players such as Sterling culminated in the Terps’ dominance.

The Terps’ scoring success continued throughout the season. They finished the season with an average of 16.1 goals per game, the eighth highest in the country.

Before the season began, Reese was looking forward to seeing how transfer Aurora Cordingley would mesh with returning attackers Leubecker, Libby May and Eloise Clevenger. However, she knew it would take more than individually talented players to put Maryland back on top.

“Our pieces were improving,” she said. “We knew that all of our … players were a different level than we were when we finished last season, and now it’s going to be our job to put these pieces together.”

Those pieces came together in 2022, helping the Terps finish the season undefeated in Big Ten play, a season after they lost six conference games.

Reese considers the undefeated conference record as a testament to the growth of the team.

One of the returning attacking pieces and players that shined during conference competition was May, who scored a career-high seven goals against longtime rival Northwestern — the then-No. 2 team in the country.

May finished second on the team with 64 goals scored this season and led the team in scoring during conference games with 18 goals.

The deep tournament run gave players such as May, Sterling and Leubecker experience in high-pressure situations — something they didn’t have before 2022.

“This year I’ve definitely tried to step up into more of a leadership role, being one of the players on our offense who has had the most experience with our team,” Leubecker said.