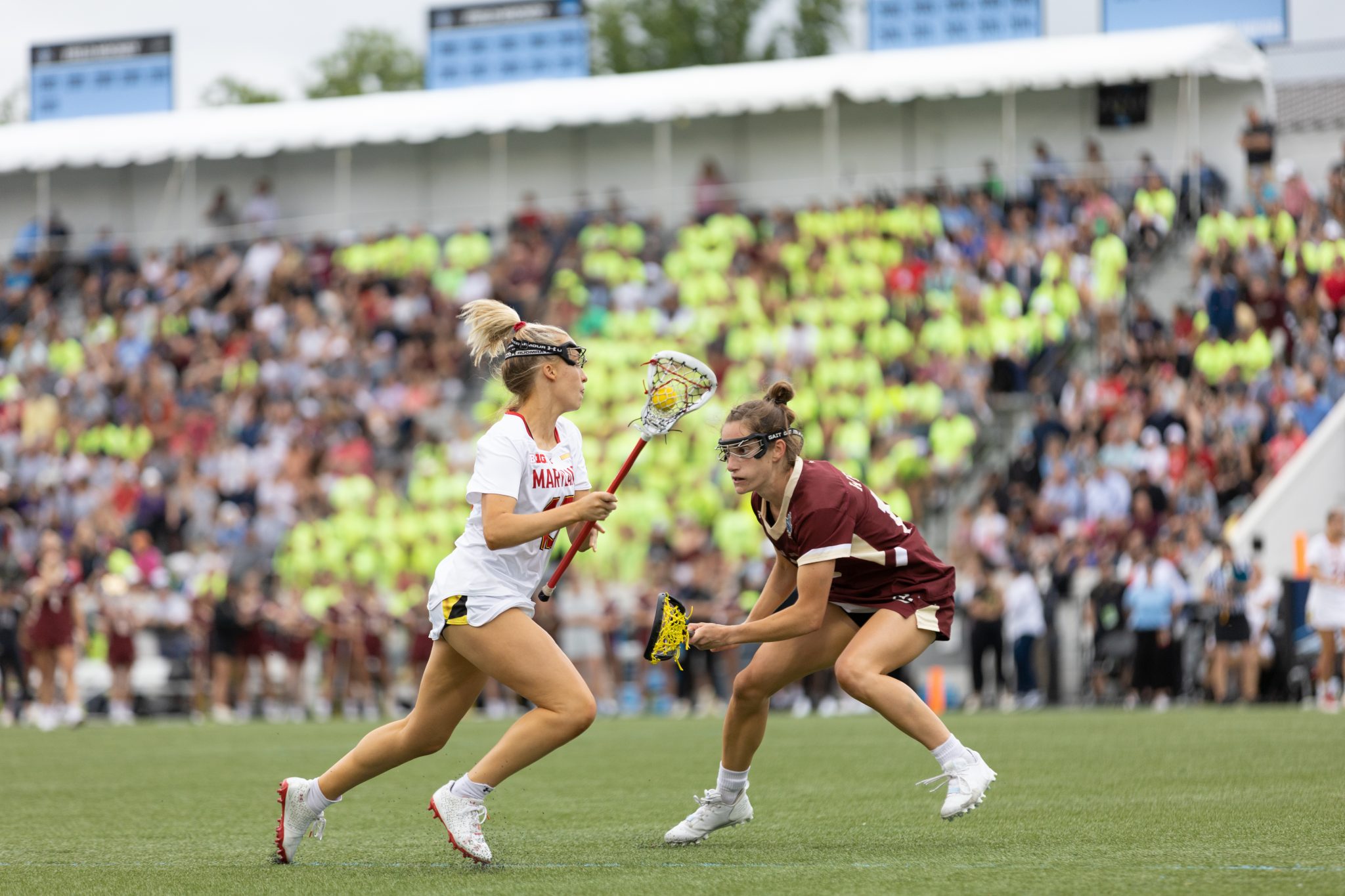 Aurora Cordingley attempts to glide past a defender during Maryland women's lacrosse's 17-16 loss to Boston College on May 27, 2022. (Riley Sims/The Diamondback)

BALTIMORE — Maryland women’s lacrosse was leading by just one goal when the ball was knocked out of Aurora Cordingley’s stick. The Eagles quickly rushed down the field and got the ball to Charlotte North.

The Boston College Tewaaraton finalist launched the ball past Emily Sterling to tie the game for the first time since the first half.

Maryland failed to execute on offense once again, and the Eagles flew back down the field. Cassidy Weeks placed a shot past Emily Sterling, who couldn’t make the save, giving Boston College the lead with just 18 seconds left.

The Terps’ dreams of another championship game ended in a contentious battle between the former-ACC foes, as they struggled to hold down the goal-hungry Eagles in a 17-16 loss.

“It’s hard when your season ends that way,” coach Cathy Reese said. “It’s hard when the last goal of the game is scored with 18 seconds left. But I’m super proud of them and what they’ve accomplished this season.”

Maryland allowed a season-high 17 goals as Boston College ended the game on a 4-0 run. North scored two of her six total goals in the waning minutes of the match.

The two teams hadn’t played each other since the Terps edged out the Eagles in the 2019 NCAA championship game.

The Eagles’ star player, North, opened up the scoring more than six minutes into the game.

Libby May quickly tied the game at one for Maryland, but the Eagles pushed back into the lead just 36 seconds later.

May responded once again, showing off her footwork as she dashed through defenders and fired the ball into the cage.

Boston College pulled ahead with a goal from Jenn Medjid just 17 seconds into the second quarter to make it 3-2 before Hannah Leubecker knotted the game.

The Eagles sprung right back into the lead with back-to-back goals, and North added another four minutes later. The finish completed her hat trick with just under six minutes left in the opening half to make it 6-3.

Maryland was forced to continue playing catch-up due to its opponents’ dominance in the draw circle. Boston College won the first six draw controls of the game.

Emily Sterling helped keep the Terps in the game in the first half, notching seven total saves through the first 30 minutes.

However, Maryland struggled to find its footing on offense. Eagle defenders locked down Tewaaraton finalist Cordingley, limiting her to a single assist in the first half. Other Terps attackers didn’t fare any better for most of the second quarter.

“We talked about their pressure the whole game,” Leubecker said.

But in the last three and a half minutes of the opening half, Maryland pulled itself together.

With a reinvigorated offense and draw team, the Terps won eight of the last nine draw controls of the second quarter.

The extra possessions speared Maryland on a 4-0 scoring run that allowed the Terps to take a 7-6 advantage into halftime, their first lead of the game.

The halftime break didn’t slow down Maryland’s momentum, as Cordingley rocketed in her first goal of the day and her 300th career point just 27 seconds into the third quarter.

Boston College scored to decrease its deficit back to one, but Leubecker pushed Maryland back to a two-goal lead less than a minute later with a free-position goal.

Jordyn Lipkin put her team up 10-8, whipping the ball into the bottom of the net as she tumbled to the ground.

May completed her hat trick as the Terps and Eagles traded goals twice, giving Maryland a small 11-10 lead heading into the final quarter.

Maryland started the final quarter off strong, as Leubecker came out on top in a scuffle for the ball and launched it into the cage. Eloise Clevenger followed with her first goal on a free-position shot to give the Terps their biggest lead of the day at 13-10.

The Terps continued to find success in the draw circle, winning 9-3 in the second half, but Boston College fought back. Belle Smith lobbed in her first goal of the game, only for Maryland to jump back to a three-goal lead with a goal from co-captain Grace Griffin.

The teams continued to trade goals, with Boston College slowly eating away at Maryland’s lead. North fired a shot into the bottom corner, making it a one-goal game at 16-15.

The Eagles added two more late, ending the Terps’ season and giving them a chance to win back-to-back national titles.

“I don’t think our mindset changed. I don’t think that anything besides that scoreboard really changed,” Shaylan Ahearn said. “I think we all played our hardest throughout that time period.”