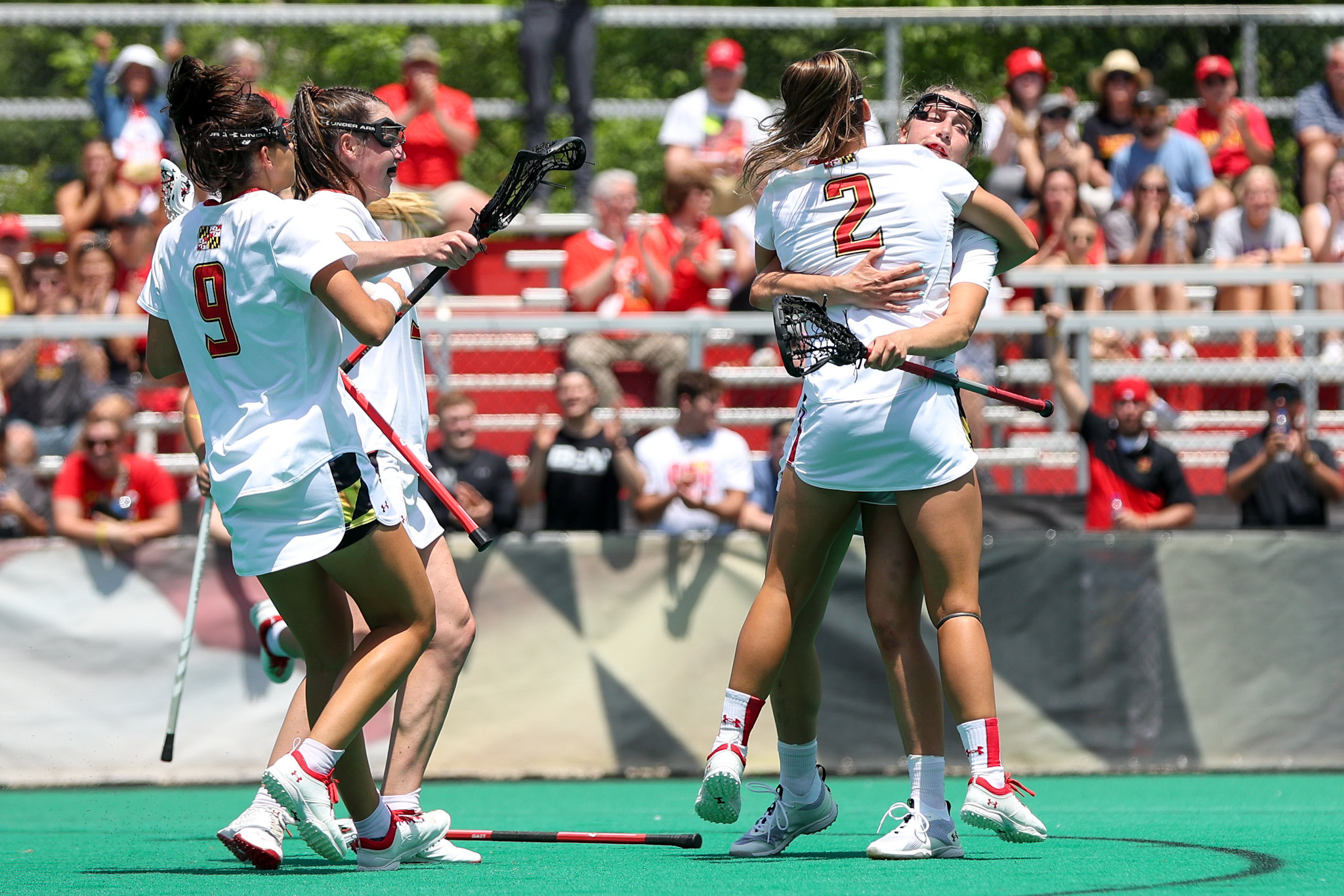 Maryland women's lacrosse celebrates after scoring a goal during its 18-5 win over Florida on May 19, 2022. (Cam Andrews/The Diamondback)

After a Florida defender intercepted a shot from Grace Griffin, the ball fell to the ground in a scuffle.

Victoria Hensh was there to scoop it up. She nabbed the ball and blasted it down into the cage for her third goal of the game, tying her career-high in goals.

“You can see when Victoria scores the energy that she brings,” coach Cathy Reese said.

With four players scoring three or more goals — Libby May, Hannah Leubecker, Aurora Cordingley and Hensh — the Terps dominated scoring as they pulled away early from the Gators.

Maryland women’s lacrosse will compete in the Final Four for the first time since 2019 after handling No. 7 Florida with ease, limiting their opponents to a season-low five goals in the 18-5 NCAA quarterfinal win.

The Terps burst onto the scene with an early goal from Hensh less than 40 seconds into the game. But the Gators quickly responded with a goal just a minute later to tie the game at one.

With both teams playing aggressive defense, the tie stayed in place for more than seven minutes before Cordingley rocketed the ball into the net to restore Maryland’s lead.

However, Florida stayed persistent on offense and once again tied the game, but Cordingley was the one to break the tie once again.

She darted in from behind the goal and fired the ball into the bottom of the net to put the Terps up 3-2 at the end of the first quarter.

Goals from May and Hensh built Maryland’s lead to 5-2 in the second frame. On the other end of the field, Sterling and the defenders found their footing and held Florida scoreless for nearly nine minutes.

“We were focusing on our communication,” Sterling said. “We wanted to know where they wanted to drive from and when we needed to send the help to those spots and then recover to the middle and I think our defense did such a good job at [communicating that].”

May didn’t let that stand for long. After catching the ball from Eloise Clevenger, the junior attacker whipped it into the top of the net to once again give the Terps a three-goal lead.

After falling behind in the draw circle during the first period, Maryland came back strong, winning seven draw controls in a row between the second and third quarters.

The Terps used the extra possessions to extend their lead, as Leubecker started the second-half scoring with a duo of goals less than a minute apart, bumping their lead up to 8-3.

Florida jumped on a woman-up opportunity to score its first goal of the second half, but one opposing goal couldn’t stop Maryland’s momentum.

The Terps continued to pull away from the Gators with a five-goal scoring run, which included three goals from May and Hensh’s third finish of the game — tying the sophomore’s career-high.

After shooting 0-for-5 in the first half, Leubecker continued her powerful third quarter with her third goal on her third shot of the frame.

Grace Griffin capped off the Terps’ 7-0 scoring run by bouncing the ball down into the goal after a rebound in the final home game of her five-year Maryland career.

The Terps’ defense continued to shine, holding the Gators to a season-low five goals after Josie Hahn’s fourth-quarter goal.

Maryland continued to pile on to its large lead with goals from Kate Sites, Jordyn Lipkin and Shannon Smith to complete the Terps’ 13-goal victory, sending them into the Final Four.

“We’ve been working so hard the past couple of years to get to this point,” May said. “We’re so proud of ourselves. It’s been a journey, but we’re really excited for next weekend.”