‘Everything starts with her’: Cathy Reese wins game No. 300 for Maryland women’s lacrosse 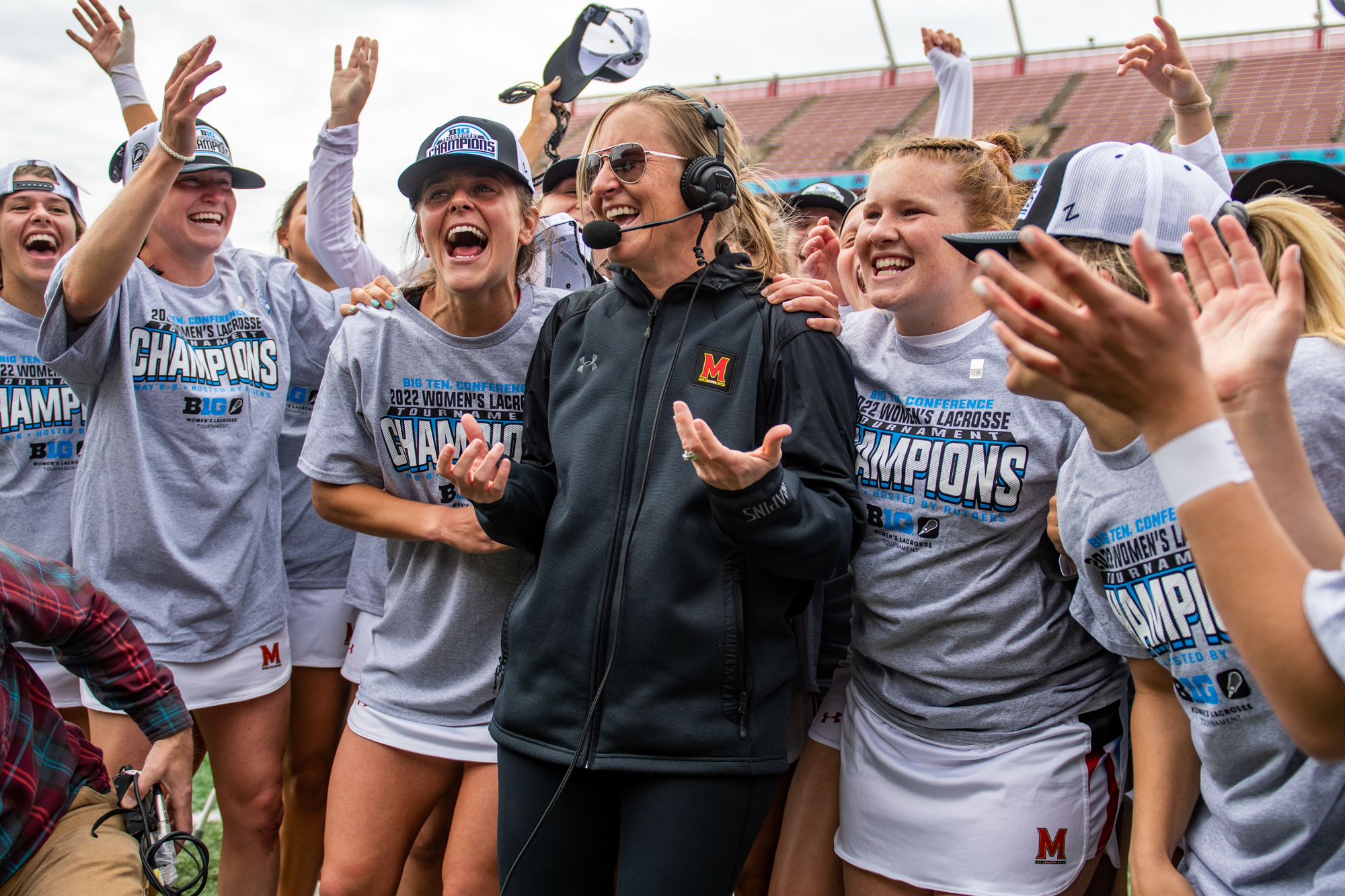 Cathy Reese and Maryland women’s lacrosse celebrate after their 18-8 win over Rutgers in the Big Ten tournament championship on May 8, 2022. (Joe Ryan/The Diamondback)

Reese, the all-time winningest coach in program history, reached a new milestone with her team’s 18-8 win over Rutgers in the Big Ten championship game on May 8: 300 wins as Maryland’s head coach.

“What a day for the Terps, I’m super proud of my group,” she said.

“We’ve gone through a lot together as a group.”

Reese started as the Terps’ coach in 2007 and has a 300-33 record with the team, with seven one-loss seasons and an undefeated 2017 campaign.

“I love Maryland,” she said. “I’m probably the biggest cheeseball talking about it.”

As a coach, Reese says she’s all about building relationships and ensuring that all of her players are having fun and enjoying playing lacrosse — not just her starters. The coach has made a point of crediting her bench players for their constant enthusiasm and energy.

“My bench was great,” she said after the win. “They don’t get enough credit but the support, the energy, they all feed off of each other.”

She’s coached a host of talented players through the years. Reese has coached five different Tewaaraton Award winners, including Taylor Cummings, the only three-time winner, and Megan Taylor, the only goalkeeper to win the award.

“I’m thankful to have had the chance to work with so many great people and excited that their love for Maryland is like mine,” Reese said.

The gratitude goes both ways, members of this year’s squad say that their coach’s leadership has forged them into the players they are.

“We see her having fun with her job, we have fun and that’s when we’re successful,” Abby Bosco said. “Everything starts with her.”

That approach pays off, especially in moments where Reese’s team needs a boost. One such moment came during halftime on Sunday, when the Terps and Scarlet Knights were tied at seven with the conference title on the line.

“She always knows how to instill confidence in you and just trusting the process, trusting Maryland women’s lacrosse,” Libby May said. “I couldn’t be more thankful and more grateful to be at this program with Cathy.”

But even after 300 wins as the Terps’ coach under her belt, Reese doesn’t solely focus on the final result. The coach said she focuses on the little things and encourages her team to love playing lacrosse.

When they do that, she believes the winning follows.

“When you love the people you’re with and love doing what you do, you want to be the best in every area,” Reese said.