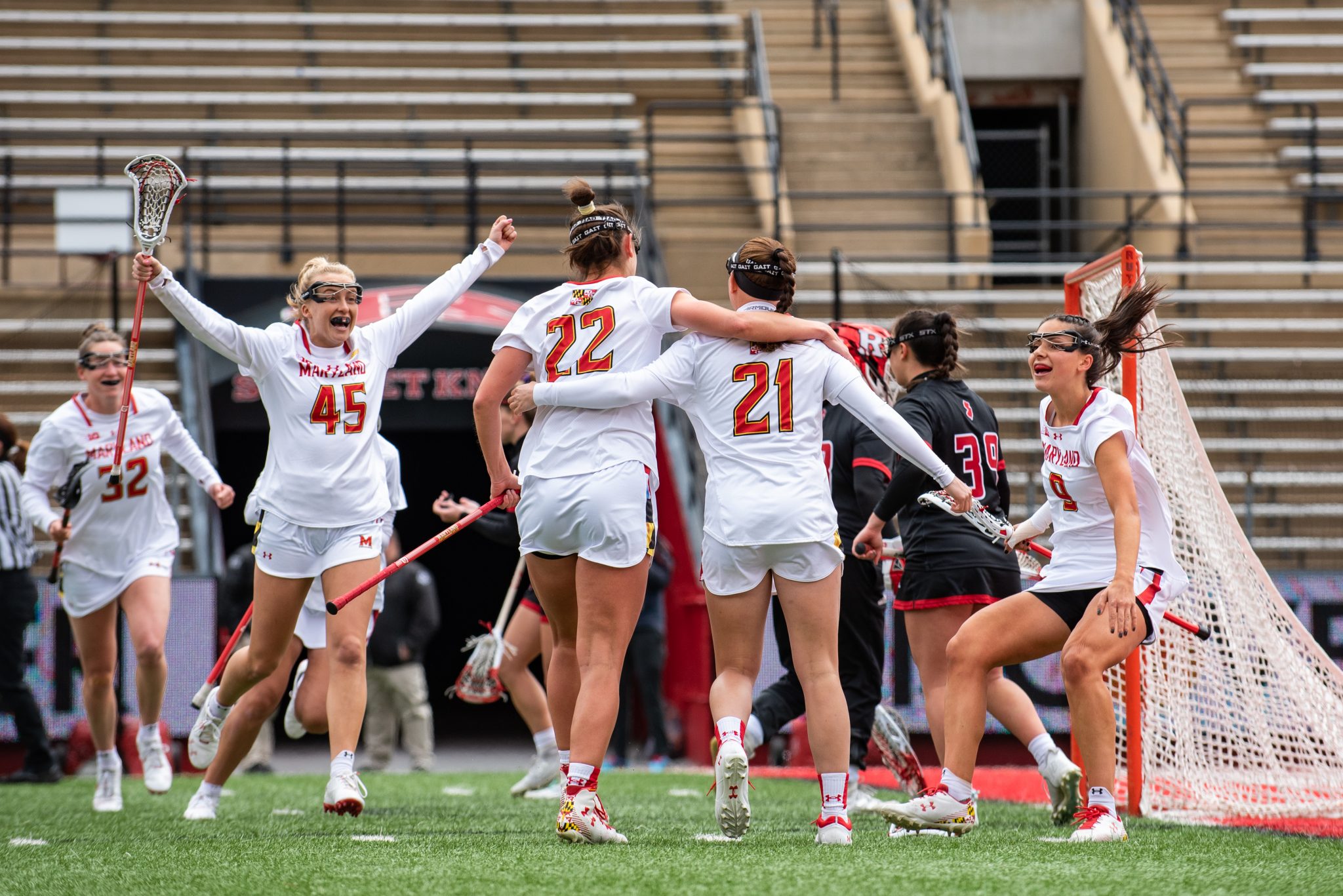 Maryland women's lacrosse celebrates after a goal during its 18-8 win over Rutgers on May 8, 2022. (Joe Ryan/The Diamondback)

Maryland women’s lacrosse coach Cathy Reese noted that her team had been hesitant on offense during her halftime interview.

Her squad entered the midway break tied with Rutgers after a first half that featured five turnovers.

One came from Eloise Clevenger, who stood all alone in front of the Rutgers’ cage but tried one too many fakes before firing a shot, giving the Scarlet Knights a chance to use a stick check to end the possession.

Clevenger would find herself in a similar position early in the third quarter, but this time she quickly launched a shot that whistled past the goaltender.

That goal helped her squad win its fourth Big Ten tournament championship after Sunday afternoon’s 18-8 win over Rutgers in Piscataway. Clevenger’s rip was one of 12 unanswered scores the Terps used to secure their tournament victory and win No. 300 for Reese at Maryland.

“We were a little slow to start and so we just re-evaluated things in halftime,” Reese said. “Like I said on the broadcast, we’re going to come out the second half attacking, and we did that.”

The teams entered the third quarter tied at seven. By the time they left it, Maryland had more than doubled its scoring, up 15-7 after the dominant frame.

It started 47 seconds into the second half when Clevenger found Libby May moving to her right. May abruptly stopped in the middle of three defenders but found a hint of space to fire a shot against the grain.

“Something that we keep stressing about our team is anybody on our offense can be dangerous,” May said. “So it doesn’t matter who’s scoring the goals … I can’t be more thankful to be on this team that’s so versatile and so team-oriented.”

But a stifling nearly 27-minute long stretch where Rutgers was held scoreless across the second, third, and fourth quarters was critical to the Maryland triumph. Sterling finished with four saves in the contest.

“Our confidence and playing together and communicating more,” Abby Bosco said. “Once we kind of get in our rhythm and are all trusting each other … that’s when everything clicks.”

Cordingley, who now sits at 111 points, helped the Terps stay within striking distance in the second quarter — scoring two goals and assisting on another during a stretch in which the Terps erased a two-goal deficit.

“Aurora is such a good player,” Reese said. “Her composure, her field vision, I’m just proud of how this offense really settled in.”

Rutgers gave Maryland a momentary scare after it erupted in a four-goal spree that put them up, 5-3. After the Scarlet Knights scored two goals in the first quarter to tie the game, Marin Hartshorn scored with a mere three seconds left in the frame before dropping her stick and opening her arms to hug the nearest teammate she could find.

Their next tally came off a fortuitous bounce. Ashley Campo dropped a pass that ricocheted off the turf. Campo swung her stick forward and connected with the carom, knocking it past goaltender Emily Sterling.

But the Terps didn’t allow Rutgers to build their lead any further than two, biding time until they unleashed their title-winning run.

“We’re still a really young group, and so when we’re faced with different challenges we’re still learning how to handle pressure situations … we were down and we had to claw our team back,” Reese said. “They didn’t shy away from the challenge. They knew they needed to chip away and their patience … paid off.”