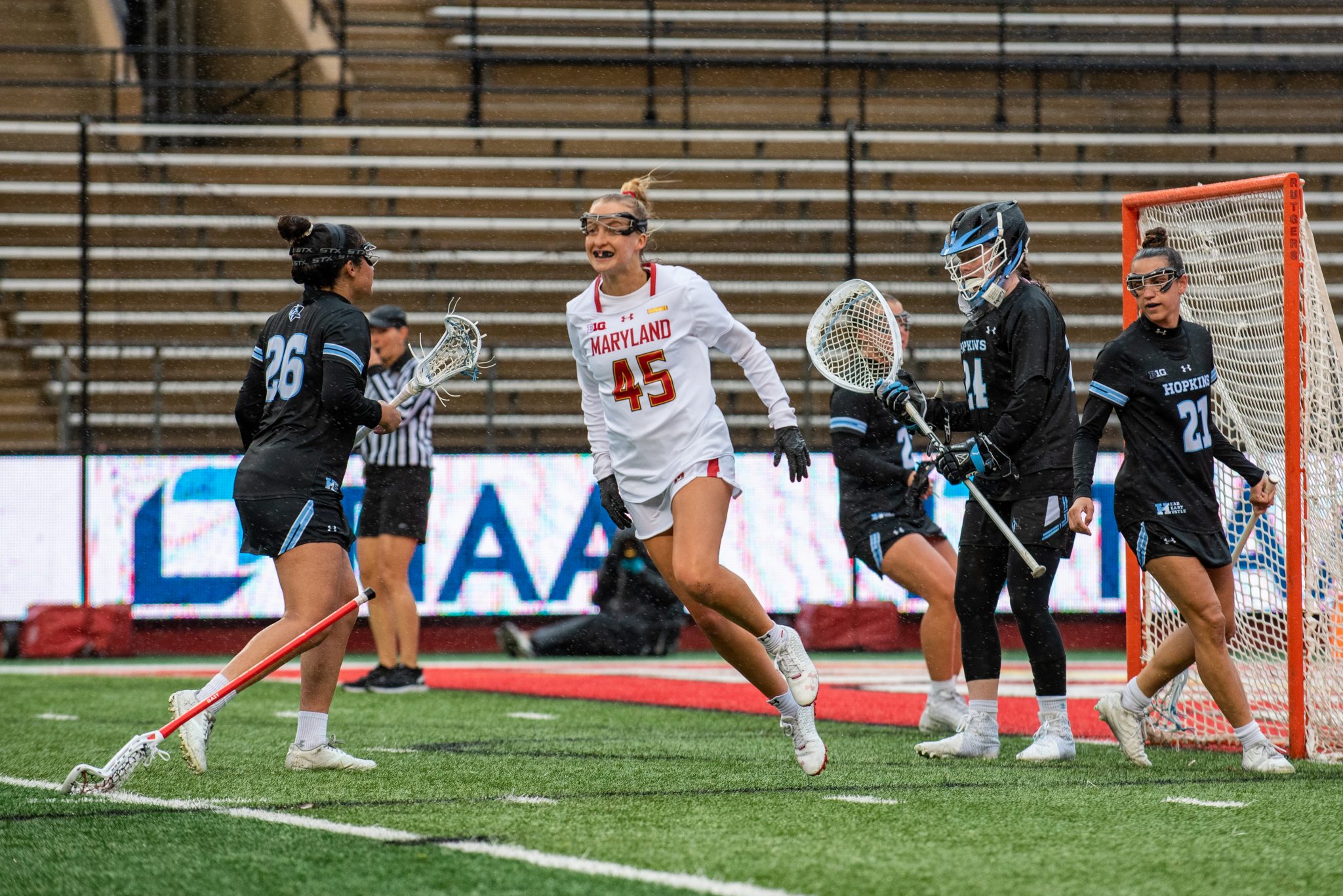 Aurora Cordingley hunched down into position as she prepared for a free-position shot in the opening minutes of the third quarter.

When the whistle blew, she leaped into action.

The attacker dodged through defenders and whipped the ball into the back of the net for her second goal of the game and her 100th point this season.

Cordingley’s seven-point day helped Maryland women’s lacrosse defeat Johns Hopkins, her former team, 14-6 to move on to the Big Ten championship game on Sunday. She’s the first player since Taylor Cummings in 2015 to record 100 points in a single season.

“Our offense is just so unselfish that we don’t really care who’s scoring because, at the end of the day, a goal is a Maryland goal,” Cordingley said.

The Terps outplayed the Blue Jays by winning 17-7 in the draw control circle and limiting their opponents’ offensive opportunities. Coach Cathy Reese’s squad will take on the winner of Northwestern and Rutgers.

Just like in their last matchup, the Blue Jays notched the first goal of the game before Shannon Smith responded with the Terps’ first tally early in the first quarter.

Smith would add another to give her team a 2-1 lead.

But Johns Hopkins learned its lesson after a resounding loss in early April. Its defense pushed hard against Maryland’s offense and forced bad shots on goal before the Blue Jays finally got the ball and rushed down the field to tie the game at two.

The Terps were limited to a season-low two goals in the first quarter as they continued to struggle against the Blue Jays’ defense.

“We knew we were going to get a fight from Hopkins and knew they were going to come out and challenge us,” Reese said. “But we were able to clean some things up as the game went on.”

But in the second quarter, the Terps showed their offensive prowess with three goals under 90 seconds from Libby May, Aurora Cordingley and Hannah Leubecker.

Rather than shooting on a free-position opportunity, she kept the ball close and moved through defenders to get a clear shot on goal. When she had it, Leubecker launched the ball to the back of the cage and gave Maryland a 6-2 lead.

Midfielder Grace Griffin capped off the Terps’ electric second quarter with her first goal of the day off an assist from Cordingley with under four minutes left in the frame before the Blue Jays responded with a goal off a woman-up opportunity.

The rain created slippery field conditions that plagued the Terps, who continuously lost control of the ball with 10 first half turnovers.

The Blue Jays edged out the Terps in draw controls, 13-12, in the first matchup. But Maryland took early control of the draw circle on Friday with a 10-2 first-half advantage.

“When we can start off in that position with possession right off the bat that’s a small win for us,” Griffin said. “From there those small wins feed into us executing on offense.”

While Johns Hopkins once again scored the first goal of the half, the Terps quickly responded.

Griffin and Cordingley both scored their second goals of the game within one minute of each other to give Maryland a 9-4 lead.

But Cordingley didn’t stop there.

She launched the ball over her former teammates’ heads to Leubecker with just under ten minutes left in the third quarter. Leubecker charged the goal and fired in another goal, earning a hat trick.

Johns Hopkins scored again with four minutes left in the third quarter but still couldn’t launch a true comeback as the Terps poured on more goals.

But after that goal, the teams remained scoreless for nearly nine minutes.

May ended the scoring drought by receiving a pass over the cage from Cordingley and catapulting it down into the goal.

The Terps stayed aggressive in the final minutes of the game as Leubecker and Eloise Clevenger scored consecutive goals.

Johns Hopkins would score their sixth goal with about two minutes left in the game, but it came far too late as Maryland cruised into the Big Ten tournament final.