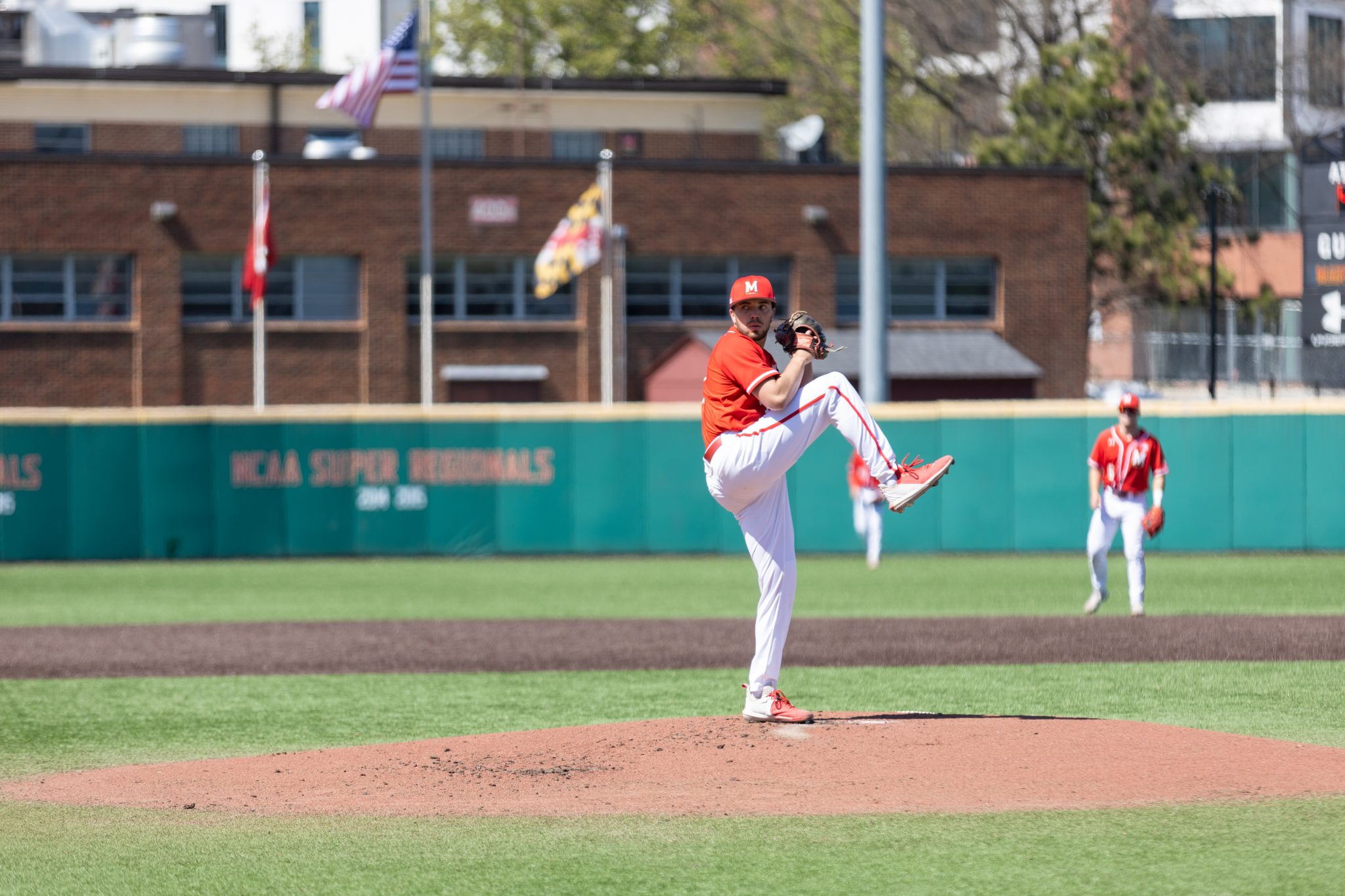 Ryan Ramsey winds up for a pitch during Maryland baseball's 6-4 win over Penn State on April 2, 2022. (Riley Sims/The Diamondback)

The Terps had no regular pitching starters left. Robinson was the alternative — a sixth-year player who had given no more than a couple of innings in relief or in spot starts.

Regardless, Robinson delivered. With the season on the line, Robinson gave Maryland five scoreless frames with five strikeouts, both season-highs, against UConn in the game of his life.

“What he did tonight was nothing short of heroic,” Coach Rob Vaughn said. “Just pounding the strike zone, went deep into that game [and] gave us an unbelievable start.”

Maryland held a 4-0 lead into the fifth as Robinson dealt to an energized crowd that grew rowdier with every out. But the grad student couldn’t make it all the way, and the sixth inning saw everything go awry as he left the mound.

Starting with Nigel Belgrave, the Terps’ bullpen slowly crumbled. Belgrave allowed his first two batters on-base and advanced them off a wild pitch. Will Glock took his place, and then the runs came. The Huskies knocked in three RBIs under Glock until Michael Walsh did his best to end the tumultuous inning.

But with three full innings to go in a suddenly even ballgame, Maryland would have to figure out a steady presence on the mound. Either that, or the Terps would have to throw everything they had at the Huskies.

Maryland chose the latter. After Sean Heine momentarily steadied the ship but then allowed UConn to bring the game close late, Ryan Ramsey jogged to the mound.

The junior was coming off an 81-pitch Friday night start, and was being called in to yank the Terps from the brink. A former closer, Ramsey hadn’t come on in relief all season. The rust showed — a wild pitch tied the game for UConn and upped the heat on Ramsey.

He responded. Ramsey managed two and one-third innings of shutout pitching until Andrew Johnson took the mound from him in the 11th frame. Vaughn said the original plan was for Ramsey to go just two innings, but he wasn’t too keen on coming off.

Johnson finished the job, and Maryland’s offense finally stepped up to do the rest on its third consecutive walk-off opportunity. But without Robinson’s unexpected heroics, Ramsey’s surprising cameo and a Maryland offense that came up big when it mattered, Maryland’s season would’ve ended in disappointing fashion at home in College Park.

Vaughn emptied the tank, and left little for Monday in the bullpen. But even UConn coach Jim Penders agreed that Maryland was facing a do-or-die scenario.

The Terps couldn’t hold anything back.

One player saw all seven pitchers for Maryland — catcher Luke Shliger. The sophomore caught 20 innings on Sunday, and Vaughn said he was fatigued. He’ll have less than 24 hours to recover before the Terps take on the Huskies in their third game of the weekend.

Because of the exhausting night on the mound, Maryland will now face the challenge of a scarce pitching staff moving forward in the tournament. Vaughn said he may try starter Jason Savacool for an inning and will work in a couple of guys to fill in the blanks.

“We didn’t have the luxury of saying, ‘Oh, we got to save somebody to start tomorrow,’ because if we don’t get that done today, there is no tomorrow,” Vaughn said.

The Terps have relied on explosive, record-setting offense all year. And in their biggest game of a stunning season, they’ll have to return to their roots to capture a regional title.

“I don’t have a clue who we’re going to start yet…we’re gonna put some gold jerseys on and try to slug our way through that thing tomorrow,” Vaughn said.