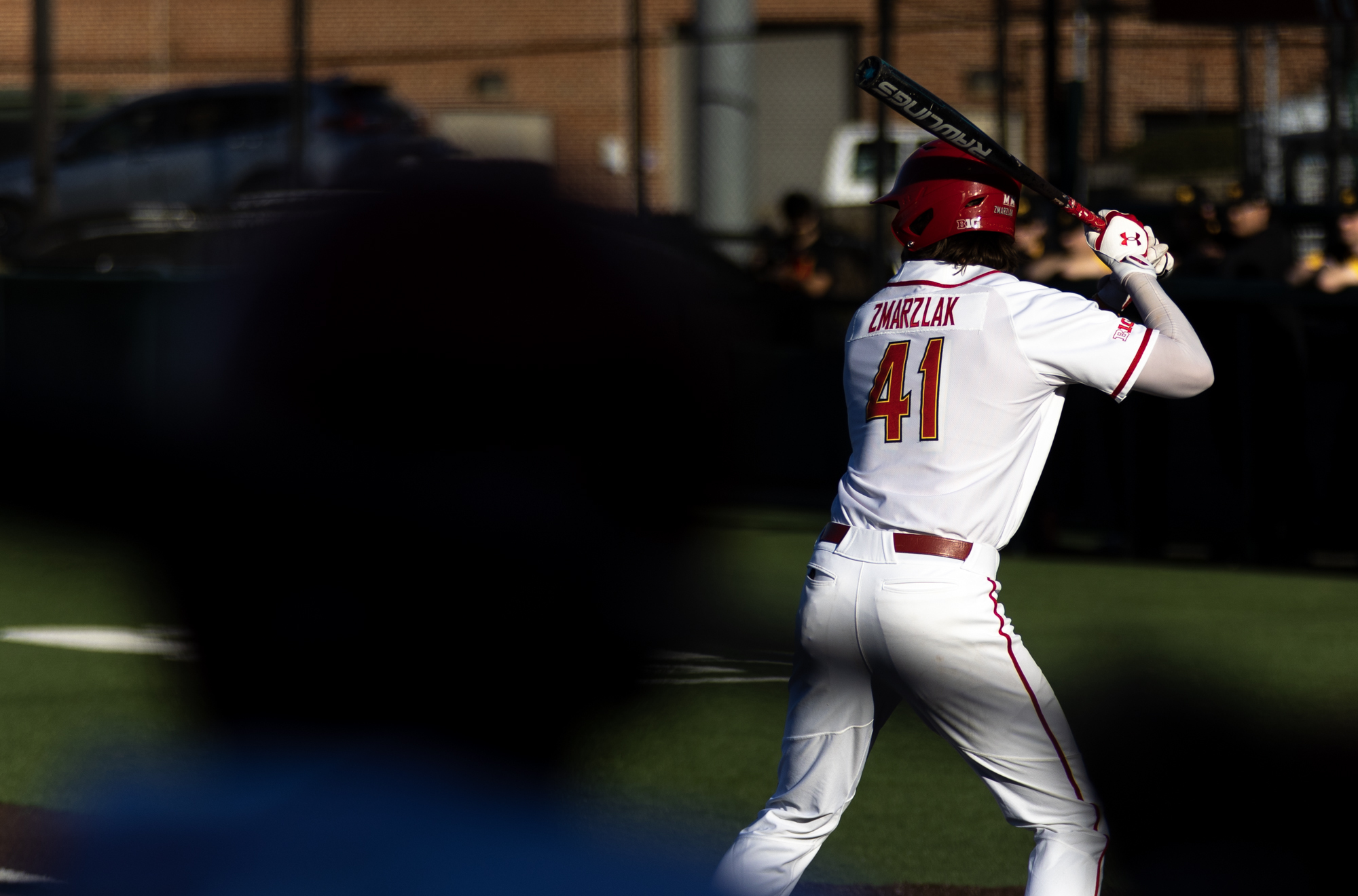 Time was running out for Maryland baseball.

A two-run deficit in the eighth looked mountainous with the Terps’ hitters struggling through frame after frame. With just four outs left, Bobby Zmarzlak took a fateful stroll into the batter’s box.

The junior had been bumped down one spot to the No. 8 spot in the Maryland lineup in favor of Ian Petrutz, but this moment remained his. Zmarzlak made it last, clobbering a pitch over the left-field fence for a two-RBI homer to tie it up. He was exuberant, and so was Bob “Turtle” Smith Stadium.

From there, Maryland baseball needed little motivation as they came back after a slow start and bashed their way past Wake Forest, 10-5. The Terps’ playoff hopes would survive a couple more hours, at the least.

They will take on UConn on Sunday at 7 p.m and will need to beat the Huskies twice to advance.

Zmarzlak’s home run was part of a six-run eighth inning for the Terps. Luke Shliger smacked an RBI double soon after and Chris Alleyne channeled it equally — rocking a pitch over the centerfield wall and emphatically stomping on home plate to place the exclamation point on the rally.

The Maryland left fielder supplied a flustered and frustrated offense with inspiration with one shot. The Terps channeled all the energy his blast provided into flipping the game with multiple scoring shots.

Those shots were desperately needed to take down the Demon Deacons and continue the Terps’ historic season.

Wake Forest proved to be a tough match-up. A former ACC opponent for the Terps, the Demon Deacons had built a formidable postseason resume leading into the NCAA Tournament and were the No. 2 seed in the College Park Regional.

They fell to UConn in the first round but blasted Long Island to stay alive in the NCAA Tournament and to face the Terps. The Demon Deacons came out determined and jumped out to an early lead.

After a scoreless two-strikeout inning from starter Teddy McGraw, Wake Forest batters Pierce Bennett and Brendan Tinsman knocked in a pair of RBI doubles to force Maryland to play from behind.

“It was a very similar game to yesterday,” Vaughn said. “But I think that’s just a testament to [Nick] Dean … they jumped out early.”

The Terps’ offense started slowly, mirroring Saturday’s disappointing performance. But a powerful slug from a senior who faced the prospect of his season ending sparked hope.

Max Costes launched the 40th homer of his career, smashing a hanging breaking ball to the left-field bleachers to tie the game at two.

The homer gave Costes’ squad a chance, a chance that was bolstered by Dean finding his rhythm after a shaky start. The junior right-hander flustered the Demon Deacons with four strikeouts in three ensuing scoreless frames.

But against a powerful Wake Forest lineup, Dean cracked in the fifth inning. Bennett, from the same Baltimore high school Costes came from, smacked a fastball down the center of the plate over Chris Alleyne’s glove at the right-center field fence.

Brock Wilken followed in the next inning with a two-RBI shot to give the Demon Deacons a 5-2 lead after six innings. Dave Falco took over with two outs in the innings and ended the frame with a strikeout.

“I’m never worried when we’re down … I have zero worries about our team’s ability to hit and score runs,” Falco said.

Kevin Keister added a solo shot in the seventh to bring the Terps closer before their eighth inning upended the game and captivated the home crowd. Maryland stared down a three-run deficit and the potential end of its season but regathered to take a 9-5 lead entering the final frame.

Ian Petrutz slugged a solo bomb, celebrating before the ball even went over the fence, to expand Maryland’s lead to five entering the bottom of the ninth.

Falco returned for the bottom of the ninth and struck out the side to retire the Demon Deacons and complete Maryland’s comeback, setting up a two-game rematch with the only other team remaining in the region — UConn.

“Like I said, getting to a regional final isn’t the goal of this thing and we did the same last year [against East Carolina],” Vaughn said. “We were in this exact same spot and came up short…you get to tomorrow, all bets are off.”