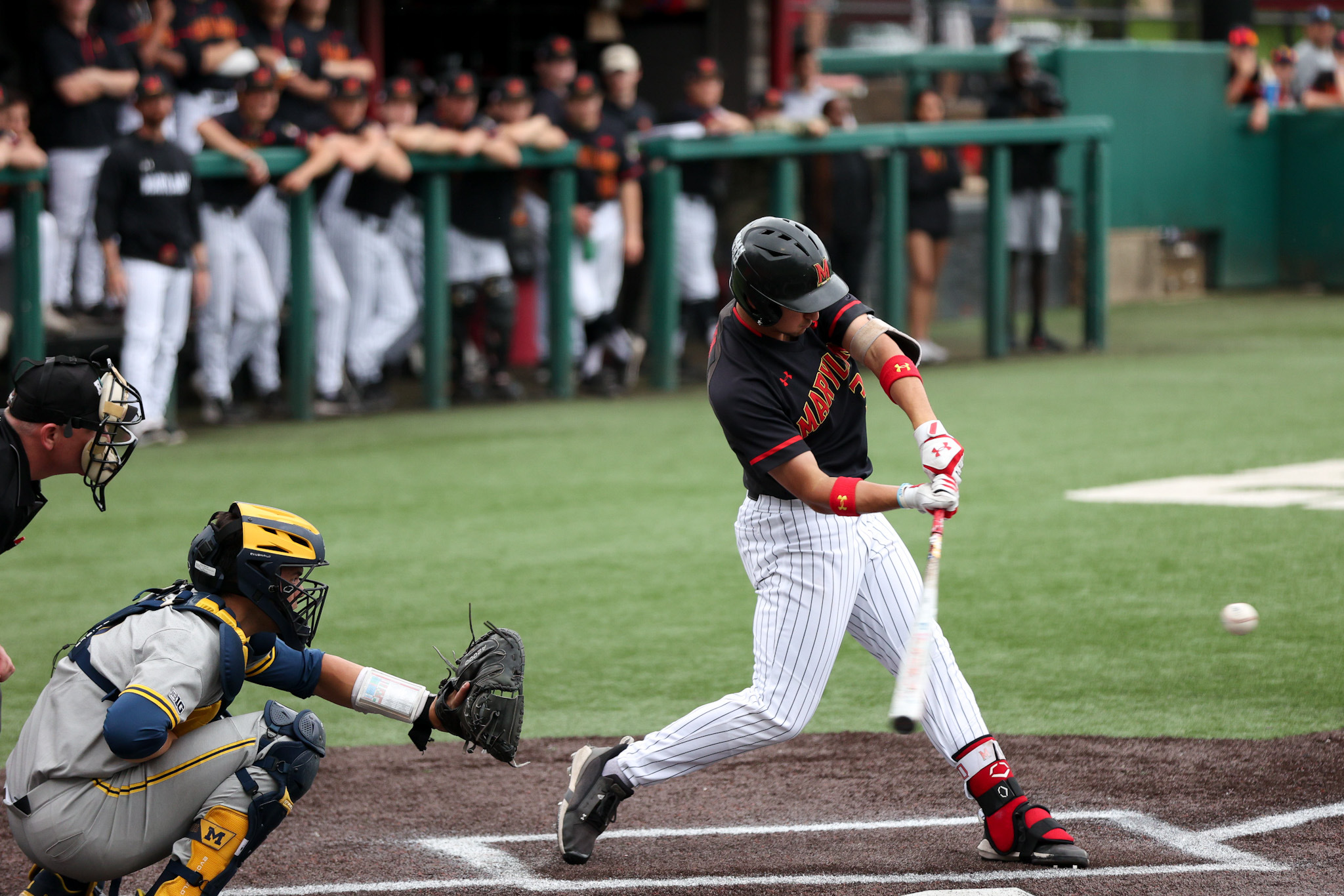 Nick Lorusso swings at a pitch during Maryland baseball's 20-6 win over Michigan on May 14, 2022. (Cam Andrews/The Diamondback)

Chris Alleyne braced for impact as he was struck by a pitch in the bottom of the 11th inning. With the bases now loaded, the Terps had a golden opportunity to finally find a way past the Huskies when Nick Lorusso stepped up to bat.

With only one out, Lorusso launched a pitch deep into right field. UConn’s outfielders didn’t even attempt to catch the ball as it bounced off the wall. Kevin Keister crossed home plate before immediately running with his teammates toward the junior.

Lorusso was mobbed in between first and second base as his walk-off single kept Maryland baseball’s season alive, allowing the Terps to celebrate a 7-6 victory over the Huskies on Sunday.

“That entire at bat I was just trying to think of a deep flyball,” Lorusso said. “I’m just glad I got the job done.”

Maryland will now take on UConn once again in a winner take all matchup on Monday with a spot in super regionals on the line after handing the Huskies their first loss of the regional tournament.

“This time of year, it doesn’t have to be pretty, it’s just about getting it done,” coach Rob Vaughn said.

Despite falling behind in the first inning of their last two games, the Terps got off to a much better start. Vaughn gave the ball to Nick Robinson and the graduate student delivered, opening up the game by retiring the side in order.

Maryland’s bats then struck first in the bottom of the opening inning against starter Enzo Stefanoni, picking up right where it left off against Wake Forest.

Lorusso doubled down the left field line with two outs, and Matt Shaw drove in Lorusso with an RBI-single to center field to give the Terps an early lead. Maryland wasn’t done there, as Troy Schreffler hit a long two-run homer to left-field bleachers to pad the Terps’ lead at 3-0.

“We ambushed [Stefanoni] early and got after him pretty good,” Vaughn said.

Robinson worked around a leadoff double to strand the runner on second base in the second inning, and pitched another one-two-three frame in the third. That included his fourth strikeout of the game, his most of the season as Robinson continued to cruise through the Huskies’ lineup.

Shaw made a diving stop to keep UConn off the scoreboard in the fourth inning, as Robinson continued to stymie the Huskies. However, the Terps weren’t able to get on the board again themselves.

Bobby Zmarzlak was hit by a pitch and Keister was walked with two outs in the bottom of the fourth, chasing Stefanoni out of the game. Luke Shliger drew a walk against new pitcher Garrett Cole to load the bases for Alleyne, but his blooper to left didn’t fall as Maryland missed out on a chance to pad its lead.

The Huskies threatened to score their first run of the game in the top of the fifth frame. But with two runners on in a 3-2 count with two outs, Robinson got Erik Stock to ground out to second, ending UConn’s threat much to the delight of the Bob “Turtle” Smith Stadium crowd.

Robinson’s final line was five innings with five strikeouts, only allowing four hits in his longest outing since Feb. 28, 2020. He delivered the stellar performance the Terps desperately needed in their second game of the day.

“To be here and to be playing in this game and to have the opportunity to start is just an opportunity of a lifetime,” Robinson said.

Lorusso opened up the bottom of fifth with a solo home run that cleared the left field bleachers to extend Maryland’s lead to 4-0.

But the combination of Nigel Belgrave, Will Glock and Michael Walsh struggled in the top of the sixth inning. The trio from the Terps’ bullpen allowed four UConn runs to cross home plate, tying the game in a single frame.

Alleyne opened up the bottom of the seventh inning with a double to put Maryland in business. Two batters later, Shaw hit a grounder in the hole between first and second that David Smith dived for. He was able to coral the hit, but his throw to first base was offline and allowed Alleyne to beat an errand throw home as the Terps reclaimed the lead.

Maxwell Costes’ RBI-single into right field brought Shaw in, drawing the roar of the crowd as the Terps took back the momentum.

But UConn struck back in the top of the eighth inning with an RBI-triple off Sean Heine. The hit was just out of the reach of Schreffler as the Huskies cut the deficit to one.

With a runner on third and two outs, Vaughn made an aggressive move — bringing in ace Ryan Ramsey from the bullpen just two days after he threw 81 pitches. A wild pitch from Ramsey allowed a runner on third base to score before the pitcher got out of the inning, tying the game heading into the ninth frame.

Ramsey returned for the ninth inning and worked around an infield bloop single to give Maryland the chance to walk off. But the Terps failed to take advantage as the game reached extra innings.

Neither team could find a run in the 10th frame before Andrew Johnson entered for the Terps in the 11th inning. He retired three of four batters to give Maryland its third chance to walk the game off.

The Terps finally took advantage, as Keister singled off Devin Kirby to retire the Huskies pitcher. His replacement — Jack Sullivan — struggled as he loaded the bases before Lorusso’s launch handed Maryland the victory.

“In that 11th it’s all about just finding a way to do your job and that’s exactly what each and every guy did,” Lorusso said.