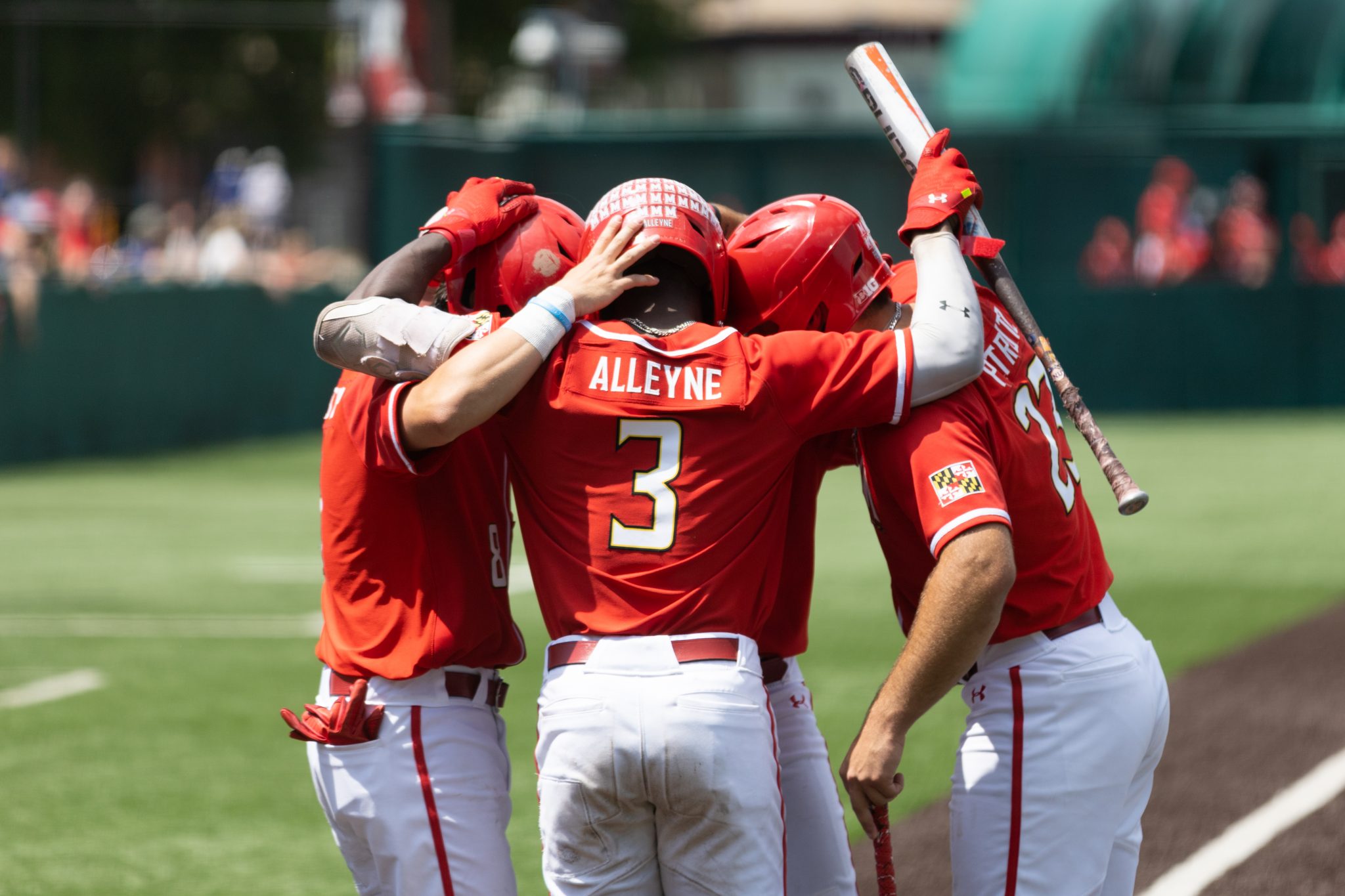 Chris Alleyne and Max Costes stood with their families facing home-plate and the crowd at Bob “Turtle” Smith Stadium, beaming with the coaching staff surrounding them. They were celebrating Senior Day before their last regular-season home series game.

The moments felt tender and lasted. They and others came and left as the commemoration ended. Maryland baseball still had a series to sweep, and the rest of their squad gave them plenty more to celebrate after the game.

Four different players clobbered homers in a gigantic fifth-inning rally for the Terps that overwhelmed a Michigan team that had jumped on them early.

“It ain’t easy for the other team to win on Senior Day,” coach Rob Vaughn said. “That’s just the reality. It means a lot.”

The lead proved insurmountable as Maryland downed the Wolverines, 15-10, moving them into a tie for first in the Big Ten.

But Maryland’s offense fell flat despite the opposition’s gifts. The Terps struggled for a timely hit despite Allen’s self-imposed struggles.

Pressure built to even higher proportions as Dean allowed a pair of runners on-base and Michigan’s Riley Bertram smacked one just short of going over the fence in the fourth frame for an RBI double. Dean recovered, but Maryland’s hitters continued to disappoint.

“We couldn’t quite get that big hit early, but the staple of this team is that they don’t panic,” Vaughn said. “They don’t get worried about what’s going on.”

While an Ian Petrutz hit to right field inspired some confidence the Terps could find their groove, nothing came to fruition. A fielder’s choice stopped Petrutz short of second and Luke Shliger couldn’t advance Kevin Keister.

Michigan continued to put pressure on the Terps as the Wolverines added another run off a sacrifice fly before Dean could escape top of the inning. Maryland came up to bat, and needed a response yet again.

The Terps found themselves in a hole again early, as they did on Saturday, with Alleyne starting off the fifth inning with a promising double to left.

Then Nick Lorusso changed the game. The junior found his pitch, and torqued it over the center-field wall for a pair of runs. Matt Shaw followed him up with his own solo shot as the crowd buzzed.

Costes and Bobby Zmarzlak found their way on-base with a pair of singles before Petrutz took the plate.

Maryland’s offense had gone from passive to dangerous, and the freshman helped them make the transformation to lethal. Petrutz launched one to right, and it was well-gone to clear the bases on the three-RBI shot.

“I was looking for something to drive with [runners on] first and second, less than two [out],” Petrutz said. “I was just banking on a fastball, and he threw the fastball high that I could drive and I drove it.”

Alleyne smacked Maryland’s fourth homer of the inning — a two-RBI slug — and the Terps capped an eight-run frame that flipped the game on its head.

Michigan’s Joey Velazquez responded with a solo shot, but it hardly made a dent in Maryland’s comfortable lead. Dean took his leave after a 5 ⅔ inning day as Will Glock took the mound and closed the top of the sixth.

And despite the slow start, Maryland’s offense continued fueling the fire. Shliger smashed a three-run shot in the bottom half and Shaw added his fifth homer of the weekend to wrap up the series with a 15-4 advantage taken into the eighth.

“[I’m] definitely in a groove,” Shaw said. “You’ll get a few days where you see the ball well, but I’m hoping to stay consistent with it through the end of the season.”

Maryland held on despite a late rally from Michigan to end an impressive sweep over the Wolverines, capturing its 41st win in a record-setting year with the conference title within reach.

“The team this weekend, as a whole, came together completely,” Petrutz said. “We’ve been waiting for it to fully come together with defense, pitching and offense.”

“This weekend showed how good we can be when we put it all together.”