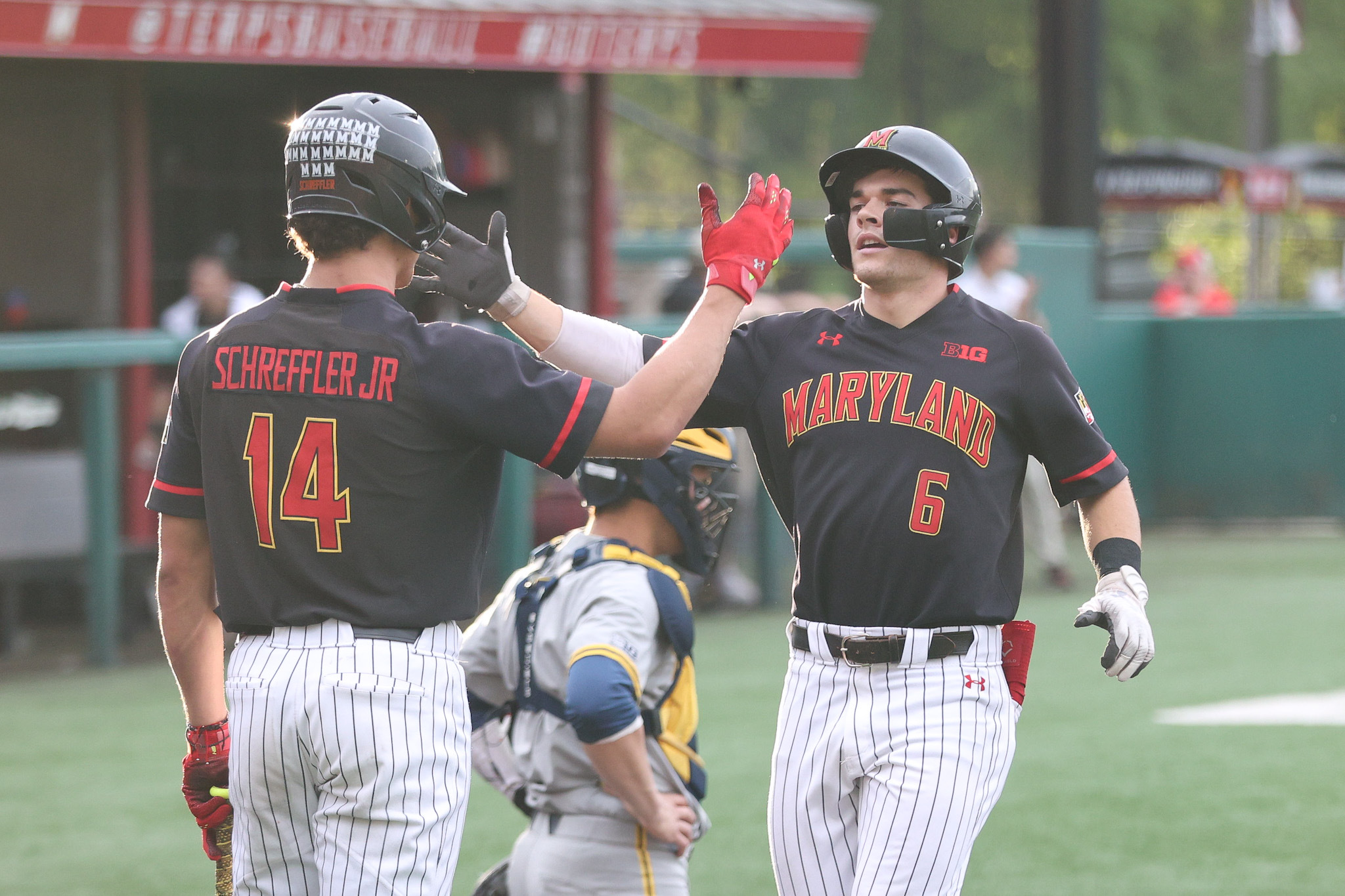 Matt Shaw came into the game with a flaming-hot bat, wrecking three homers in his last four games. But as he settled into the box during the seventh frame with the bases loaded and the game still in doubt, Shaw had more than statistics at stake against Michigan.

The shortstop had the opportunity to nail the coffin shut in favor of the Terps. Shaw wiggled his bat, awaiting the 1-1 pitch. With a leg-kick from Michigan’s Avery Goldensoph, the pitch pierced tension-thick air down the center of the plate.

Shaw torqued his hips, smashing the ball towards opposite-field and into the night — sealing an important series win against the Wolverines with a historic three-homer outing.

Ryan Ramsey dealt a perfect game the last time he took the mound at Bob “Turtle” Smith Stadium, but the pitcher got out to a poor start immediately.

Ramsey threw scattershot pitches near the plate as he missed enough to walk the Wolverines’ first three batters.

But when he found the strike-zone against Michigan’s Jimmy Obertop in the game’s fourth at-bat, Obertop made Ramsey pay. The catcher hammered a pitch down the plate to the right-field gap for an easy pair of runs for the Wolverines.

After a shaky start, Ramsey got out of the jam following a strikeout and a ground-out on the ensuing at-bats with the help of a failed squeeze from the Wolverines.

“He didn’t have feel for any of his stuff and he still goes and gives you five innings,” Vaughn said.

Maryland’s offense came up short in its first chance to respond, but the Terps jolted to life in the second inning with urgency as they faced a 3-0 deficit off a solo shot in the top of the inning.

Troy Schreffler, whose smart base-running helped Maryland to Friday’s narrow victory, kicked it off for the Terps. The junior laced a pitch off a Michigan fielder’s glove to board first, and then advanced to second off contact from Max Costes.

Bobby Zmarzlak poked a perfectly placed ground-ball right past second, and Schreffler scurried home for Maryland’s first score of a seven-run inning. Luke Shliger and Chris Alleyne combined for a trio of RBIs later on a pair of doubles.

Then Shaw dug in. He found his pitch on a 1-1 count, and whipped it over the opposite-field wall for a three-RBI shot that placed the cherry on top of an explosive inning from the Terps.

“[Shaw] is incredible,” coach Rob Vaughn said. “I said that from day one … he played elite-level shortstop today [too].”

The explosive second frame allowed the Terps to quickly take a decisive 7-3 advantage. Michigan and Maryland exchanged a pair of runs via a two-RBI shot from Matt Frey and a two-RBI single from Ian Petrutz in the third inning.

Ramsey settled and the Wolverines finally found a suitable thrower in Cameron Weston after rotating through a few pitchers as each squad chilled at the plate following a high-scoring start. Shaw added his second homer of the game in the fourth to build Maryland’s lead to 10-5.

Michigan found the strength to respond in the fifth with an RBI single. Ramsey’s outing came to an end in the frame following a hectic sequence that saw Maryland tag a runner out on second, despite Michigan coach Eric Bakich fuming over the call.

With Noah Mrotek taking the mound in the sixth, Maryland found stability. The right-handed reliever threw clean sixth and seventh innings that set up a huge bottom of the seventh frame for the Terps.

Michigan’s relievers went haywire in the inning, walking a pair of batters and hitting another among other mistakes. The bases loaded for Shaw as he took the plate with two homers already.

With one powerful cut, he added the dagger. His grand-slam gave Maryland a nine-run lead and allowed the Terps to coast to their 40th victory.

“It’s definitely up there, I’d say probably top three,” Shaw said of his personal performance. “I’m just glad that everything is starting to come together a little bit.”

The Terps found a couple more scoring hits after Shaw’s momentous slug, but it all meant little more than added punishment for the Wolverines with the game already in hand.

“We’re gonna need [Shaw] to get hot, a guy like that gets hot and that can really carry your offense,” Vaughn said. “And if we’re going to win when it really matters … it starts with him at shortstop.”