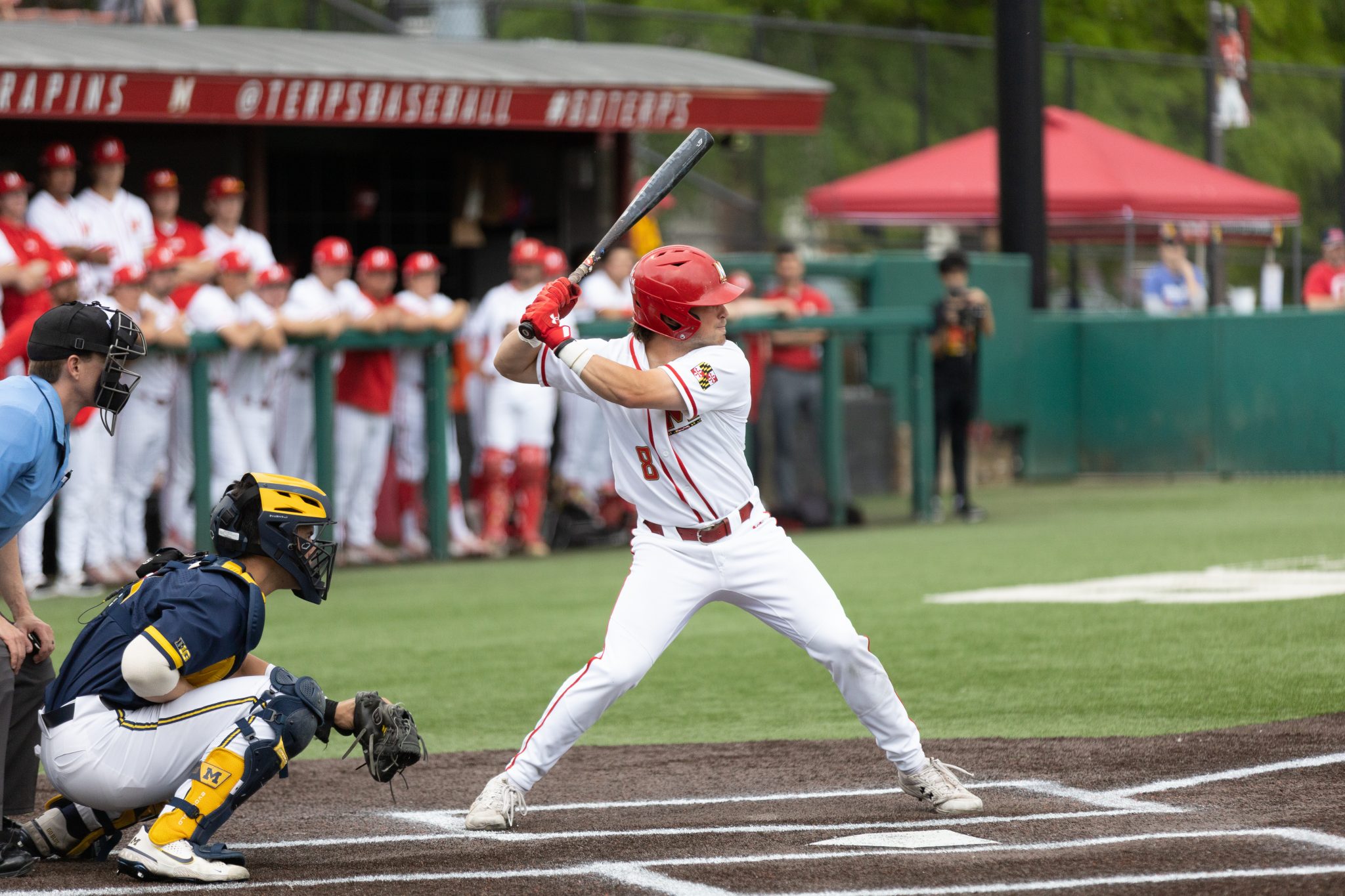 In the eighth inning of a rollercoaster outing, Michigan had the game in its grasp after a spectacular comeback. But Troy Schreffler stood on third after stealing his way there – ready to break the tie. When the Michigan pitch skittered away from its catcher, Scheffler made his mad dash home.

“I saw it, the adrenaline took over, and I just started running,” Schreffler said.

“That was high-risk, high-reward and I knew there was a chance I could get there,” he said.

After a wild seven-run comeback attempt from the Wolverines, the Terps earned their most regular-season wins in school history as they secured a back-and-forth 8-7 victory on Friday.

“Troy Schreffler at the end, completely fearless and using what makes him really good,” coach Rob Vaughn said. “That’s what can make him a game-changing player … a lot of toughness today.”

Before Maryland and Michigan even touched the diamond for their series opener, the Terps had some added motivation to triumph in the series. Back in March, the Wolverines used a late scoring run to give the Terps their first loss after an 8-0 start.

Now Maryland seemed eager to show its improvement from that early-season matchup.  The Terps flaunted their development early.

“I told the guys before the game, you’re up 4-0 [against Michigan in March], you’re cruising and we missed an opportunity with the short game,” Vaughn said.

“We gave them some momentum and they jumped on us the next inning … offensively you guys can’t stop.”

Starting pitcher Jason Savacool blasted swing-and-miss stuff through the strike zone in the first frame — looking nearly unaffected from soreness that caused an early-inning departure in his last outing. He would end with seven punch-outs on the day.

If the sophomore’s marksmanship over the plate wasn’t enough, Maryland’s batting order played up to its usual high bar. After a pair of outs in the first inning, Nick Lorusso channeled the Terps’ trademark power by hammering a pitch over the tall center-field wall to kick off the scoring.

Savacool would have to wait a few innings for further reinforcement on the scoreboard, but he continued sending a steady tune of dejected batters back to the visitors’ dugout. The Wolverines found themselves flustered by his renewed velocity and reliable mix of pitches.

“Good stuff. His stuff was really crisp,” Vaughn said. “It stunk getting our tails kicked last Saturday when he came out in the first but at the same time ends up being the freshest guy [for today].”

All the while, Michigan couldn’t curtail Maryland’s offense. While the Wolverines tried switching things up on the mound early — exchanging Noah Rennard for Connor O’Halloran in the third inning — it backfired.

The Terps exploded at the plate in the fourth inning. After a pair of walks set up a golden scoring opportunity, Bobby Zmarzlak capitalized with a two-RBI single up the middle of the field.

Ian Petrutz followed with a double to right-center before Kevin Keister capped off the eruption by walloping a two-RBI slug.

The explosive inning lit up the scoreboard to the tune of five runs and a seven-run lead for Maryland. With Savacool thriving, it looked insurmountable for Michigan.

Savacool finally ceded ground to the Wolverines with a homer to kick off the sixth inning and quickly tied himself up in a bases-loaded jam. His defense helped him escape it with a critical 4-6-3 double play on a bouncer to Keister that nullified Michigan’s scoring chance.

Vaughn then pulled Savacool in favor of Sean Heine. But the senior fared no better – allowing a double and walking a pair to load the bases again.

“[In the first matchup with Michigan], got off our game a little bit, they were able to come back [and] take some good swings just like they did tonight,” Schreffler said. “Tonight we were able to stay locked in and just get the job done.”

Nick Robinson came into the game and inherited that logjam. The pressure immediately came to a fever pitch as Robinson allowed a sacrifice fly and another walk. Then Michigan’s Joe Stewart lasered a two-run single to bring the Wolverines within three.

Matt Frey erased that deficit. He sent a ball high that flew over the center-field wall for a three-RBI shot and the tie as Michigan rebounded from seven-down in swift fashion.

Maryland’s relief pitching had betrayed them once again — a problem area that has haunted the Terps through various parts of this season. A blow-out shifted to a nail-biter as Maryland struggled to hold on.

Emotion reigned as Maryland silenced the Wolverines in the eighth inning.

Costes pumped his fists in excitement after the second out. Dave Falco gave up a walk but struck a batter out to end the frame and gave the Terps a chance to recover.

They would, as Scheffler’s dash to home plate sent them ahead and set the stage for Nigel Belgrave to close. Belgrave did the job as Maryland snatched the series opener from the Wolverines.

“This is a tough team,” Vaughn said. “I think they expected to win tonight even when it got bad and when I went out to the mound there was no panic.”