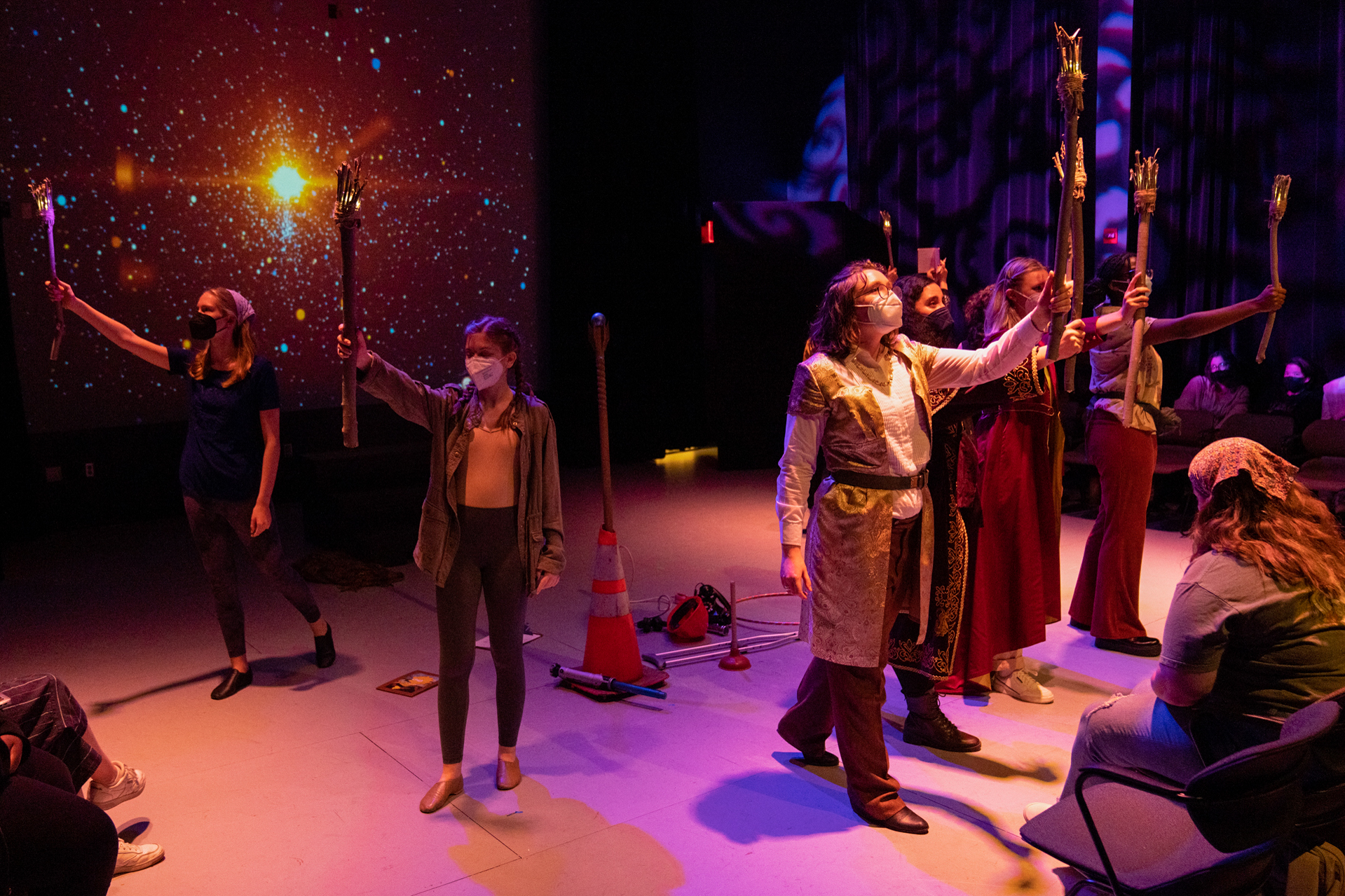 By Tyrah Burris
For The Diamondback

The theatre, dance and performance studies school presented TBD: A Devised Theatrical Celebration and Sacred Places Friday in their experimental performance series. Directed and performed by students, TBD is a devised theatrical celebration that casted artists who were LGBTQ+ and artists of color. Sacred Places is an allegory about a crumbling community 150 years after a climate disaster.

Directed and produced by senior Alie Karambach, TBD consisted of 11 two-minute plays and was a blend of traditional theater roles influenced by The Neo-Futurists, a Chicago theater group. The audience chose the order of which scenes were acted out, and each piece was written and directed by the members of the crew, according to Karambach.

“We did kind of a blending of those traditional theater roles to make it more decentralized and collaborative,” he said.

The performers were called ‘divisors’ because they wrote and performed their own pieces, according to Layali Aljirafi, the co-producer and costume designer.

In the beginning of the process, junior theatre major and TBD performer Roxanne King said the students took part in writing workshops to collaborate on ideas.

“That was a first for me because I am a performer first, but it was really cool,” she said.

The inspiration for the pieces came from the everyday lives of the divisors, according to King, and the time spent talking about their days connected them as a group.

“We had so much time to just sit and rant about our days and just the overall theme of what we wanted to write about, which I think really connected us,” she said.

The students have been working on the play since January, and King said being able to finally present the performance was fulfilling.

“Just having the energy of the audience … and it’s random every night, so we don’t know what’s going to happen has us on our toes a lot,” she said.

Jordan Resnick, the writer and producer of Sacred Places, was inspired during her time as the assistant director on the play Hookman last semester.

“Since we’re coming back in person after a year apart and we’re in a crumbling democracy at the current moment … I wanted this play to be an allegory,” she said.

Sacred Places is about a community of people who are not learning from their mistakes by repeating patterns, thus bringing them more destruction and downfall. In the piece, a young prophet who’s coming into her powers realizes people need to make a change for their own good to save themselves from themselves, Resnick said.

“I think art is so powerful and so necessary as a lens for us to be able to see where we are currently and to be able to reflect what we’re doing and what we hope to do better,” she said.

Currently, the world is at a place where people from opposite sides of the political spectrum can’t talk to one another, Resnick said.

“It’s only a screaming match, and then no one’s actually listening to the words underneath,” Resnick said. “I believe that with powerful art we could get these messages and actually say, ‘Let’s listen to other people, let’s actually have a conversation.’”