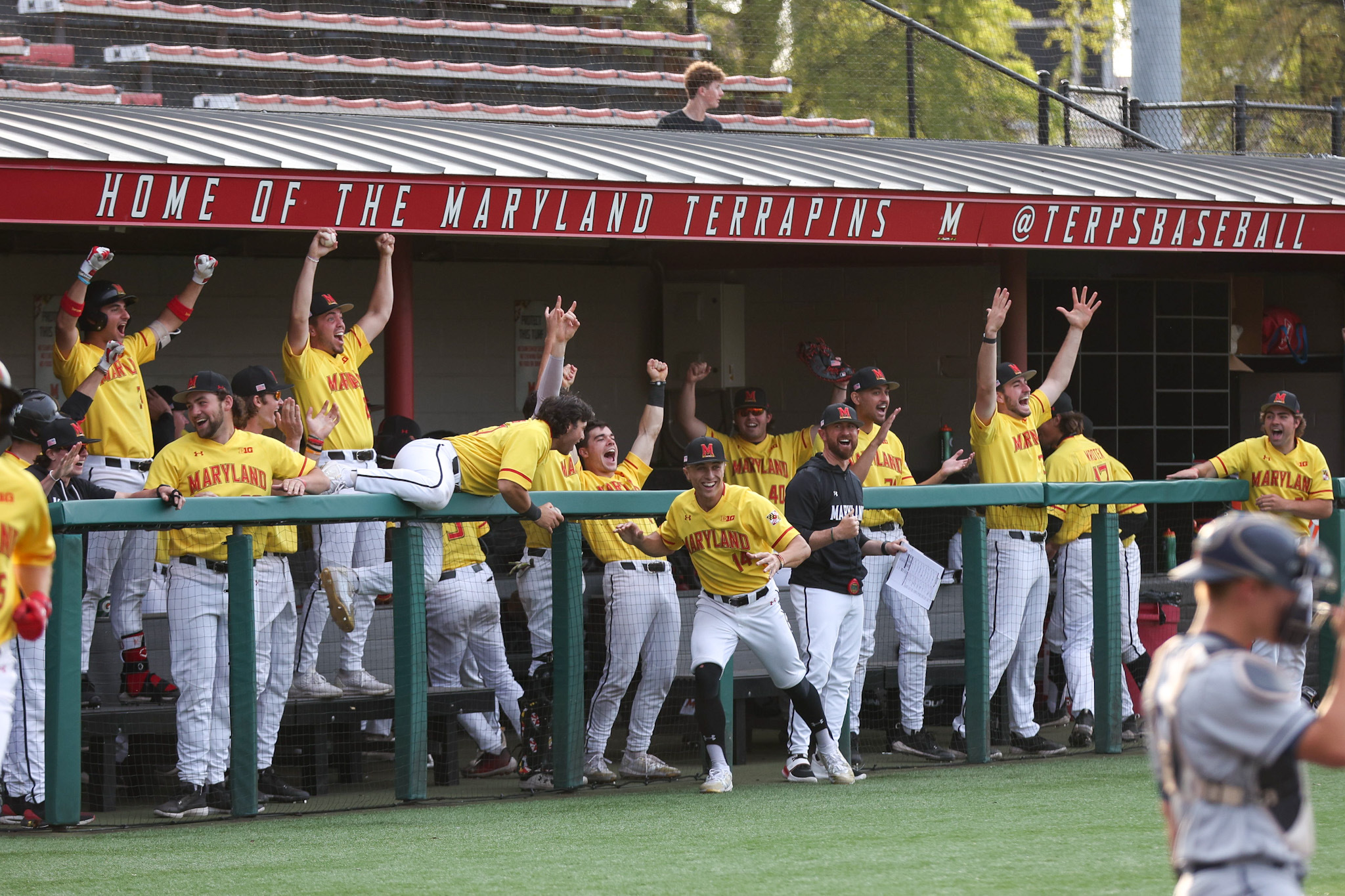 Maryland baseball celebrates during its 19-1 victory over Georgetown on May 3, 2022. (Cam Andrews/The Diamondback)

When Maryland baseball found the right pitches, they crushed them.

With Rutgers giving a valiant effort in catching up with Maryland, the Terps needed one more score in the ninth victory to cushion their lead.

Chris Alleyne had a 2-1 count and a two-run lead to fall back on. Alleyne peered ahead towards Rutgers’ Sam Portnoy’s low-slot delivery, and saw a low, hittable pitch.

He took the chance, throttling it to right-field for a three-RBI homer that wrapped the most satisfying series win of the Terps’ season against the Big Ten leading Scarlet Knights.

“We faced [Portnoy] yesterday, so I knew what I was looking for, something low in the zone,” Alleyne said. “Ended up getting it, put a good swing on it and put it in the air.”

“It’s a good win for the program,” coach Rob Vaughn said. “Continue to build on what we’re trying to build to.”

Maryland and Rutgers took the field for the rubber match of a crucial conference series after a thrilling doubleheader the day before that featured high-scoring blowouts for both squads.

In what may be one of the more important games of the year for the Terps, they took on former Maryland reliever Sam Bello as he made his first career start. Bello transferred to Rutgers in the offseason and has impressed to the tune of a 2.10 ERA in 34 ⅓ innings.

“He’s had a great year for [Rutgers],” Vaughn said. “He threw the ball fine, we just ran into some baseballs. We had a really good plan.”

The junior managed to land his first five outs with only one hit, but that would soon change as Bobby Zmarzlak took the plate with two outs.

Bello went through his quick wind-up, and fired to Zmarzlak. The pitch hung on the outside part of the plate, and it proved too appealing for the junior left fielder not to swing at.

Zmarzlak crushed a no-doubter to center to kick off the day’s scoring in the top of the second. Rutgers’ Chris Brito responded to lead off the bottom of the frame with his own home run to tie it up.

“Every time they scored, we answered and as an offense that’s deflating when you can’t get a shutdown inning.”

Kevin Keister added to the total with a blast to the right-field wall in the third before a fourth inning where the Terps got two more solo shots from Max Costes and Matt Shaw. Maryland’s hitters left little to chance at the plate, even if most of their production came in short spurts.

But that type of production abruptly came to a halt as Rutgers pulled Bello off the mound in quick fashion after the former Terp allowed four homers on the day.

While Maryland found offense in more methodical fashion with a sac fly from Chris Alleyne in the fifth and an RBI single from Keister in the sixth — Rutgers wasn’t done yet.

As Dean came off the mound, the Scarlet Knights jumped on their opportunity with reliever Sean Heine faltering as he had two runs charged to his ledger.

“Dynamite start out of Dean,” Vaughn said. “Dean was outstanding against some really dangerous hitters.”

Dave Falco would enter and stem the bleeding, getting the Terps through the eighth inning and into the top of the ninth where Alleyne’s three-run blast set the stage for Falco to close the game out.

A strikeout, a groundout, and a flyout later, Maryland had secured a series victory against a formidable conference foe.

“A really complete baseball game, and we had to do that [to] beat these guys at their place,” Vaughn said.