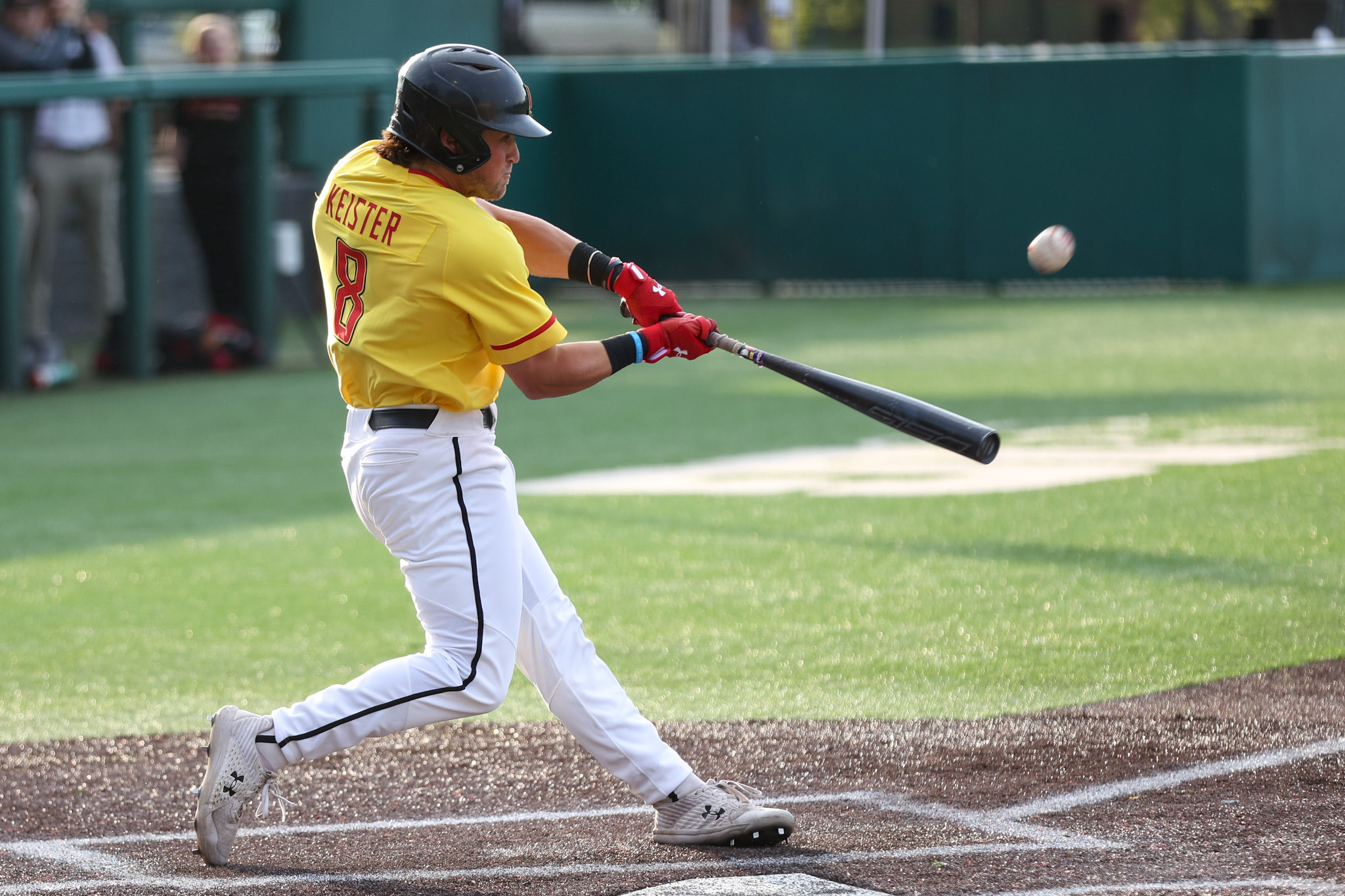 Kevin Keister swings at a pitch during Maryland baseball's 19-1 win over Georgetown on Tuesday, May 3 (Cam Andrews/The Diamondback)

Kevin Keister was one of two Maryland starters held hitless in the first game of the Terps’ Sunday doubleheader. But in game two, he made his presence felt early.

Trailing 3-0 after going down in order in the first inning, Maryland was put in a prime position to get on the board after Rutgers pitcher Nathan Florence walked the bases loaded with no outs. But a strikeout and an infield flyout put the Terps in danger of wasting a huge opportunity.

Then Keister dug into the box.

The No. 9 hitter saw a fastball over the outer half of the plate, sat back just enough, and barrelled the ball well over the right-field fence.

The two-out go-ahead grand slam was the first of Keister’s career and led to Rutgers pulling Florence.

But after, things went downhill for Maryland. After winning game one of Sunday’s doubleheader 16-8, the Terps lost game two, 18-7. The first victory gave Maryland its program-high 37th regular-season win and the split kept the Terps two-and-a-half games behind Rutgers for first place in the Big Ten.

Keister’s opposite-field shot epitomized one of the big reasons No. 18 Maryland has been successful this season — that it can count on hitters at the bottom of the order to succeed. Its nine-hitter boasts an average of .320 with an OPS of .950.

Following an offensive onslaught in game one, it looked like the Terps’ success would continue into game two.

In game one, five of Maryland’s starting nine reached base three or more times. The Terps batted over .450 with runners on base and .438 with two outs.

In game two, the Terps hit an underwhelming .111 with two outs. Keister’s homer was the lone long-ball they struck compared to the five they hit in game one. They still managed to put up seven runs, but that wasn’t nearly enough as Maryland’s pitching.

Jason Savacool threw only one inning in game two, allowing three runs and grabbing his back repeatedly in apparent discomfort leading to Maryland calling on its bullpen early.

What happened next was representative of one of the teams’ biggest struggles this season — bullpen depth.

In the bottom of the second inning, both teams were in their bullpen with Maryland leading 4-3.  Maryland’s bullpen allowed ten unanswered runs as the game got out of hand shortly after both teams turned to their bullpen.

In game one, the Terps’ bullpen had to work only three innings thanks to a solid performance by Ryan Ramsey. Still, they allowed six runs. In game two, the bullpen pitched seven innings due to Savacool’s exit, allowing 15 Scarlet Knights to cross home plate.

Following the split, the Terps will look to bounce back from a less than ideal game two and take the rubber match on Monday with Nick Dean on the mound.