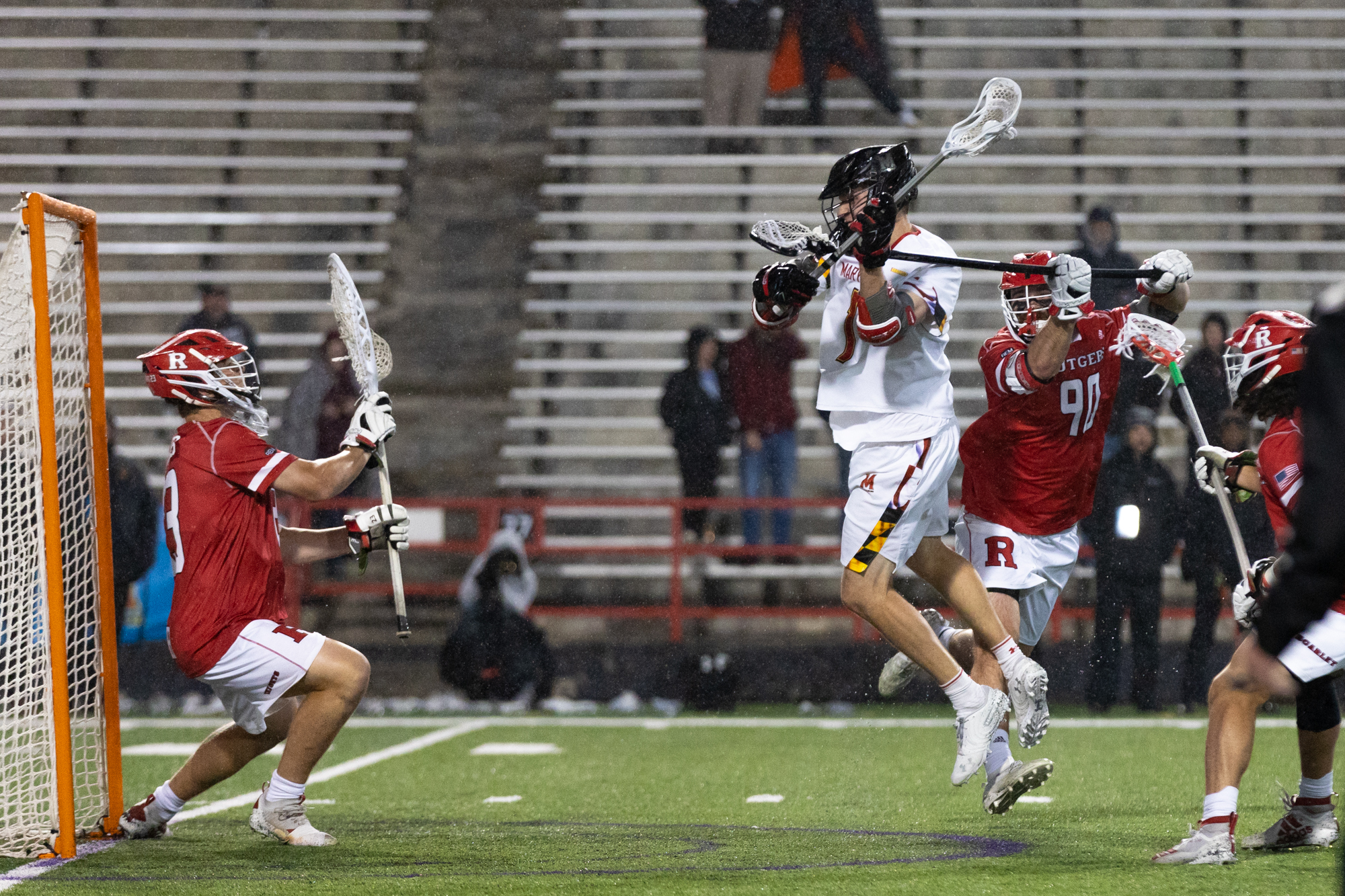 The mass of white-clad jerseys sprinted from the far bench to the goal where their goaltender resided. Sticks flew in the air as the Maryland morass jumped up and down in glee at the 15-yard line.

But just as quickly as they started, the festivities subsided. The jumping stopped and the Terps returned to the area near their bench to shake hands with their vanquished Rutgers foes.

After those pleasantries they received grey t-shirts, some wearing them over their jerseys and others draping them around their necks. Almost every player donned black and white trucker hats that signified the same thing the shirts did.

Maryland men’s lacrosse stood alone at the top of the Big Ten, tournament champions after trouncing No. 4 Rutgers Saturday night, 17-7, on a rain-soaked Maryland Stadium to capture the conference championship for the second straight season.

“This was just a box we checked, we want ultimately to get the main thing,” Big Ten tournament MVP Logan Wisnauskas said.

The Terps’ win began on a run like so many others from this season, started by Wisnauskas, who finished with four goals and three assists.

With just over eight minutes left in the first quarter, he loaded up from the top of the box, hesitating for a split second before darting toward the middle of the field.

The hard-charging attacker used that momentary pause to gain the angle on the Rutgers defender, driving hard to the net before whipping a shot to the far side of the goal that beat the goalkeeper cleanly.

The goal, his second tally of the game, kicked off a 6-0 run for Maryland that turned a 2-2 tie into an 8-2 rout by the time halftime arrived.

A minute later, Jonathan Donville intercepted a Remington Reynolds pass before finding Anthony DeMaio on the right side. The midfielder took a step forward to build power before rocketing a bullet through the legs of the squatting goaltender.

“I thought the guys did a good job,” coach John Tillman said. “I thought we did a good job in transition. We got some really good opportunities going from defense to offense for sure.”

DeMaio struck again before the end of the first quarter and finished with four goals.

Scores from Wisnauskas, John Geppert and Donville extended the lead. The last of the three came with just 12.6 seconds left in the second quarter when Donville ripped a shot to the top corner before dipping down low for a small fist pump. He finished with that lone goal and three assists.

The Terps were seemingly unaffected by the conditions, with Tillman noting that their habit of almost always practicing outdoors paid off in the final.

“We know that we’ll have games like this … you just kind of walk that fine line, if it’s an opportunity to play in elements that aren’t going to be putting these guys in any type of health jeopardy … we just go out,” he said. “Tonight it was probably the first rain game we’ve had all year but we certainly practiced it.”

That combined with a Maryland defense that held Rutgers for over 28 consecutive minutes allowed Maryland to build up a commanding lead that would never drop lower than five.

The Terps mirrored every movement the Scarlet Knights made, not allowing them to get to the center of the field. Rutgers only managed a paltry six shots on goal in the first half, compared to 16 for Maryland.

He went on to praise the team’s goaltending, which was anchored by Logan McNaney. The junior goaltender played 52:42 and recorded nine saves on fifteen shots.

But when the Terps were presented their trophy, it wasn’t McNaney, Wisnauskas or Donville that first touched the glass plaque.

It was Drew Morris, the backup goaltender who played just over seven minutes in the title game.

He hoisted it high above his head. The graduate student’s mouth was open as he shouted in joy, a sound drowned out by the surrounding throng of his teammates doing the same in unrestrained glee.

“If you watch Drew during the week, how he prepares, how he practices, how he challenges everybody, you would think he’s our starter,” Tillman said. “A lot of times when you’re not the starter, sometimes you change your approach. You’d never know that and I think that’s why everybody loves Drew and everybody respects him.”

“[He] cares so much about the team, always puts the team first so I think it was very fitting.”