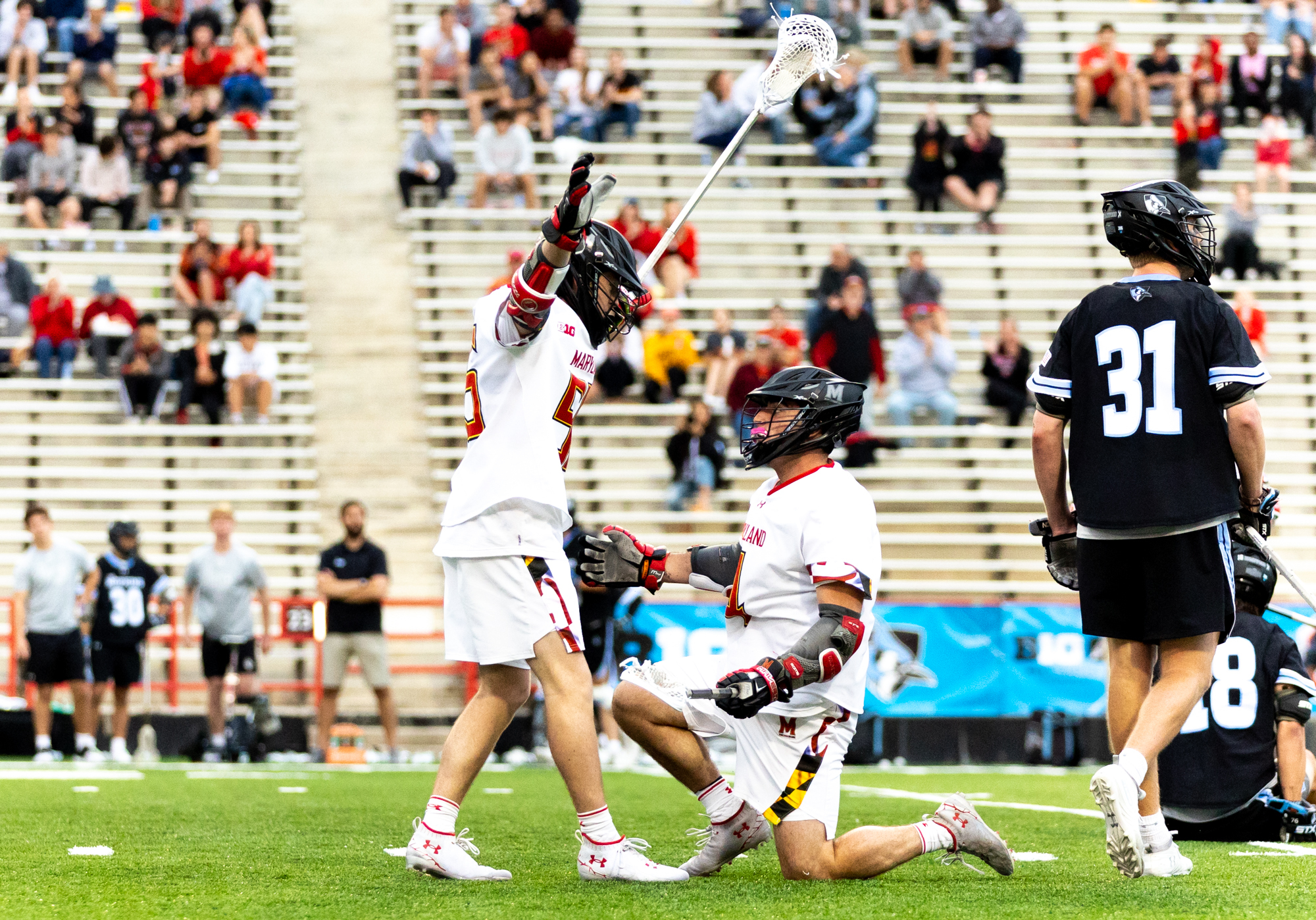 Tensions ran high in College Park late in the fourth quarter of Maryland men’s lacrosse’s Big Ten semifinal matchup against Johns Hopkins. A push followed by a brief scuffle sent both the Terps and Blue Jays to their respective benches, a microcosm of the physical battle between the two in-state rivals.

“We have to do a little bit of a better job keeping our heads,” defender Brett Makar said. “But that’s The Rivalry, you know, every time we play the emotions are gonna be high, there’s no love lost between us and them and that’s how it’ll always be.”

But as the final buzzer sounded, it was head coach John Tillman’s squad that walked out of Maryland Stadium victorious. Spurred by a dazzling seven-point performance from fifth-year senior Logan Wisnauskas, the Terps strolled into the Big Ten tournament final with a comfortable 16-11 victory in the 117th installment of The Rivalry.

Desperate to avenge its lopsided defeat at the hands of Tillman’s squad just weeks ago, the Blue Jays hung tough against the Terps early in their second meeting. After ceding a Wisnauskas goal just 31 seconds into the game, Johns Hopkins held Maryland’s typically potent offense scoreless for almost four minutes.

“I think we had some looks I think some of our guys would like to have back where we got to good spots,” Tillman said of his team’s slow start.

Keegan Khan soon ended the Terps’ drought, whipping his stick behind his head for a behind-the-back goal off of a slick feed from Eric Malever. A minute later, Wisnauskas’ second goal of the frame doubled Maryland’s edge.

But as the Terps began finding their rhythm, so did their in-state rival. The Blue Jays notched three of the next four goals of the game, tying the Big Ten battle at four to put Maryland on its heels midway through the second quarter.

“I would say they were definitely a little more aggressive in their one-on-one dodges, but we kind of expected that,” Makar said. “[When] it’s a do-or-die scenario like this you can expect their best players to try and make some plays, and for them they did tonight.”

The Terps maintained their groove coming out of the break in the third quarter, with Malever and Kyle Long notching goals to inch Maryland further ahead as the sun began to set in College Park.

Anthony DeMaio joined in on the action, rifling back-to-back goals past goalkeeper Josh Kirson. His third goal of the afternoon — a low shot that whizzed into the bottom left corner of the net following an assist from Khan — set the Terps’ bench ablaze as the lead ballooned to seven.

From there, Tillman’s squad coasted to the finish. Johns Hopkins found a glimmer of hope midway through the fourth quarter, connecting on two goals in four seconds to chip into its late deficit. But the hill was too steep to climb for the Blue Jays.

Wisnauskas finished the day at his usual spot atop Maryland’s stat sheet, leading the way for the Terps as they ran away with the 16-11 victory. DeMaio’s first hat trick of the season, along with notable contributions from Khan and Malever kept the visiting Blue Jays out of striking distance as Maryland stamped its entry into the Big Ten tournament final.

“We’ll obviously watch this game, we’ll go break it down and then tomorrow we’ll start talking about whoever wins [the other semifinal] and what we want to do, how we want to do it and kind of utilize the next 48 hours,” Tillman said.